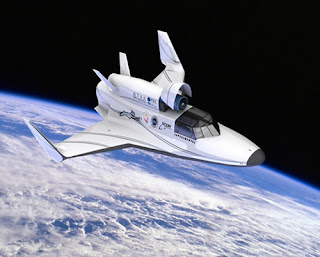 This is also a quick update on the XCOR space plane which is hot enough to pop up into near space and conduct work.  Today they announce a contract to provide exactly that service.

The demand for such flights is now strong enough to get several of these birds flying.  The capacity to fly several times per day will provide a lot of new service.

Go to the website to see engine and flight tests.  It is moving along quite fast however optimistic the contracts appear to be.

The Atsa project will use crewed reusable suborbital spacecraft equipped with a specially designed telescope to provide low-cost space-based observations above the contaminating atmosphere of Earth, while avoiding some operational constraints of satellite telescope systems.

The Atsa Suborbital Observatory was invented by Vilas and Luke Sollitt, a PSI affiliate scientist who is a professor at The Citadel, The Military College of South Carolina. Vilas, who leads the Atsa project, is a long-time planetary astronomer who recently retired as director of the MMT Observatory (a joint facility of the Smithsonian Institution and the ) before joining PSI.  Sollitt, the Atsa Deputy Project Scientist, was formerly staff scientist at Northrop Grumman Corp.

"NASA has been flying suborbital observatories for decades, on unmanned, disposable rockets. The new manned, reusable commercial platforms will allow us to make repeated observations with a single instrument, but without the need to refurbish it between flights," Sollitt said. "In addition, the short turn-around means we can do many observations or targets."

Atsa means "eagle" in the Navajo language. The facility is optimized for observing solar system objects near the sun that are difficult to study from orbital observatories such as Hubble and ground-based telescopes.

"These are natural targets for instruments on suborbital rockets to observe, but a human-tended facility using the kind of reusable launch vehicle offered by XCOR offers significant cost savings," said Mark Sykes, CEO and Director of PSI, who is also a long-time planetary astronomer and is training to be an Atsa operator.


The Lynx spacecraft will fly to space on a customized flight trajectory and will be capable of precision pointing, allowing the Atsa system with its operator to acquire the desired target and make the planned observations. "We are being approached by many potential customers who are interested in supporting observations of the inner solar system," Vilas said. "We will also be able to support target of opportunity observations for newly discovered objects and other phenomena."


"We're looking forward to flying PSI's Atsa system on Lynx, it will be a groundbreaking experience.  The rapid and flexible operations of the Lynx will enable scientists to pick specific targets of interest and the same day fly multiple tailor made observation missions quickly and inexpensively when they want them to be flown," said Khaki Rodway McKee, XCOR's Program Manager.


"We are entering into a new era in the human exploration of space, where private companies like XCOR and PSI will begin to play leading roles in certain areas, beginning with suborbital flight - harkening back to the days of NASA's Mercury program," Sykes said.


Public investment still plays a critical role in shaping the future of humans beyond Earth. "NASA is still the tip of the spear," Sykes said. "There are basic questions regarding expanding Earth life to different gravities and the availability and usability of space resources that require NASA to answer. Together, private enterprise and the public sector can realize our dreams of a future in space."

The Planetary Science Institute is a private, nonprofit 501(c)(3) corporation dedicated to solar system exploration. It is headquartered in where it was founded in 1972. PSI scientists are involved in numerous NASA and international missions, the study of Mars and other planets, the Moon, asteroids, comets, interplanetary dust, impact physics, the origin of the solar system, extra-solar planet formation, dynamics, the rise of life, and other areas of research. They conduct fieldwork in North America, and . They also are actively involved in science education and public outreach through school programs, children's books, popular science books and art. PSI scientists are based in 15 states, the , , , and . (www.psi.edu).

XCOR Aerospace is a California corporation located in Mojave, Calif

.The company is in the business of developing and producing safe, reliable and reusable rocket powered vehicles, propulsion systems, advanced non-flammable composites and other enabling technologies. XCOR is working with aerospace prime contractors and government customers on major propulsion systems, and concurrently building the Lynx, a piloted, two-seat, fully reusable, liquid rocket powered vehicle that takes off and lands horizontally, and serves three primary missions: nano-satellite launch, research & scientific missions, and private spaceflight.  The Lynx production models (designated Lynx Mark II) are designed to be robust, multi-mission commercial vehicles capable of flying to 100+ km in altitude up to four times per day and are being offered on a wet lease basis.  (www.xcor.com).