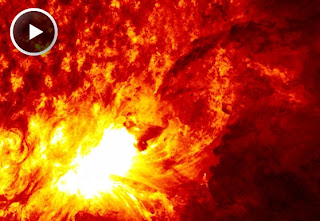 We are continuing to gather new data in abundance from the sun.  This report is about a new phenomena been observed with the new Solar Dynamics Laboratory.  This will continue for some time until a lot of this gets repeated often enough to generate frequency counts.  In the end we will have a vastly better picture of the detail.  It is a great accomplishment.

Enjoy the material.  I posted the one clip.

There will be plenty more to come.

Dark Fireworks on the Sun

July 11, 2011: On June 7, 2011, Earth-orbiting satellites detected a flash of X-rays coming from the western edge of the solar disk. Registering only "M" (for medium) on the Richter scale of solar flares, the blast at first appeared to be a run-of-the-mill eruption--that is, until researchers looked at the movies.

"We'd never seen anything like it," says Alex Young, a solar physicist at the . "Half of the sun appeared to be blowing itself to bits."

NASA has just released new high-resolution videos of the event recorded by the Solar Dynamics Observatory (SDO). The videos are large, typically 50 MB to 100 MB, but worth the wait to download. Click on the arrow to launch the first movie, then scroll down for commentary:

A close-up of the June 7th eruption shows dark blobs of plasma falling ballistically toward the surface of the sun. [99 MB Quicktime] [more]

"IN terms of raw power, this really was just a medium-sized eruption," says Young, "but it had a uniquely dramatic appearance caused by all the inky-dark material. We don't usually see that."

Solar physicist Angelos Vourlidas of the Naval Research Lab in calls it a case of "dark fireworks."

"The blast was triggered by an unstable magnetic filament near the sun's surface," he explains. "That filament was loaded down with cool1 plasma, which exploded in a spray of dark blobs and streamers."

The plasma blobs were as big as planets, many larger than Earth. They rose and fell ballistically, moving under the influence of the sun's gravity like balls tossed in the air, exploding "like bombs" when they hit the stellar surface.

Some blobs, however, were more like guided missiles. "In the movies we can see material 'grabbed' by magnetic fields and funneled toward sunspot groups hundreds of thousands of kilometers away," notes Young.

Long-range action has become a key theme of solar physics since SDO was launched in 2010. The observatory frequently sees explosions in one part of the sun affecting other parts. Sometimes one explosion will trigger another ... and another ... with a domino sequence of flares going off all around the star.

"The June 7th blast didn't seem to trigger any big secondary explosions, but it was certainly felt far and wide," says Young.

This 13 MB extreme ultraviolet movie of the explosion shows a 'solar tsunami' wave billowing away from the blast site. [13 MB Quicktime] [more]

It's tempting to look at the movies and conclude that most of the exploded material fell back--but that wouldn't be true, according to Vourlidas. "The blast also propelled a significant coronal mass ejection (CME) out of the sun's atmosphere."

He estimates that the cloud massed about 4.5 x1015 grams, placing it in the top 5% of all CMEs recorded in the Space Age. For comparison, the most massive CME ever recorded was 1016 grams, only a factor of ~2 greater than the June 7th cloud.2 The amount of material that fell back to the sun on June 7th was approximately equal to the amount that flew away, Vourlidas says.

As remarkable as the June 7th eruption seems to be, Young says it might not be so rare. "In fact," he says, "it might be downright common."

Before SDO, space-based observatories observed the sun with relatively slow cadences and/or limited fields of view. They could have easily missed the majesty of such an explosion, catching only a single off-center snapshot at the beginning or end of the blast to hint at what actually happened.

If Young is right, more dark fireworks could be in the offing.  Stay tuned.
Posted by arclein at 12:01 AM