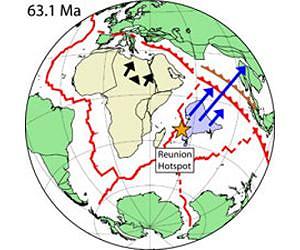 Following this analogy, do we really believe that the Icelandic super plume is driving the separation along the Mid Atlantic ridge?  There is plenty of circumstantial evidence, not least been the position of the plume and the effective end of the ridge in .

Plate movement is thoroughly documented and happens to be the one fact of modern geology that we can feel comfortable about.  Plumes on the other hand show up in the middle of continents and the like and not commonly associated with ruptures.  Thus I am more inclined to think that rupture based plumes are in fact the result of the rupture.  This certainly is the case with unless someone can show me a chain of volcanic rock all the way to the continental edges.

You get the point.  The plume on the face of present evidence elsewhere, is surely an effect and simply does not show the needed energy to explain the proposed speed of movement.

A better model for plate acceleration is to understand instead that the plate is drawn by the gravity driven subduction process.  This can accelerate as a result of a lessening of the mass of the overlying continent through erosion over eons of time causing a persistent uplift.  At some point the motion accelerates and a large part of the plate subducts in order to balance the mass equation.

In our own case the North American plate is tilting toward the east through the migration of mass eastward.  At some point the leading edge of the Pacific plate becomes dynamically unstable and shifts eastward to balance those stresses.

I think you can see were we can go with this and it is as satisfying and as convincing as the present proposal..  We have to stop thinking in terms of driving forces alone.

Reconstruction of the Indo-Atlantic Ocean at 63 million years, during the time of the superfast motion of which Scripps scientists attribute to the force of the plume head. The arrows show the relative convergence rate of Africa (black arrows) and India (dark blue) relative to Eurasia before, during and after (from left to right) the period of maximum plume head force. The jagged red and brown lines northeast of show two possible positions of the trench (the subduction zone) between and depending on whether the India-Eurasia collision occurred at 52 million years or 43 million years. Credit: Scripps Institution of Oceanography, UC

Scientists who study tectonic motions have known for decades that the ongoing "pull" and "push" movements of the plates are responsible for sculpting continental features around the planet. Volcanoes, for example, are generally located at areas where plates are moving apart or coming together.

Scripps scientists Steve Cande and Dave Stegman have now discovered a new force that drives plate tectonics: Plumes of hot magma pushing up from Earth's deep interior. Their research is published in the July 7 issue of the journal Nature.

Using analytical methods to track plate motions through Earth's history, Cande and Stegman's research provides evidence that such mantle plume "hot spots," which can last for tens of millions of years and are active today at locations such as , and the Galapagos, may work as an additional tectonic driver, along with push-pull forces.

Their new results describe a clear connection between the arrival of a powerful mantle plume head around 70 million years ago and the rapid motion of the Indian plate that was pushed as a consequence of overlying the plume's location.

The arrival of the plume also created immense formations of volcanic rock now called the "Deccan flood basalts" in western , which erupted just prior to the mass extinction of dinosaurs.

The Indian continent has since drifted north and collided with Asia, but the original location of the plume's arrival has remained volcanically active to this day, most recently having formed Reunion island near .

The team also recognized that this "plume-push" force acted on other tectonic plates, and pushed on as well but in the opposite direction.

"Prior to the plume's arrival, the African plate was slowly drifting but then stops altogether, at the same time the Indian speeds up," explains Stegman, an assistant professor of geophysics in Scripps' Cecil H. and Ida M. Green Institute of Geophysics and Planetary Physics.

"It became clear the motion of the Indian and African plates were synchronized and the hotspot was the common link."

After the force of the plume had waned, the African plate's motion gradually returned to its previous speed while slowed down.

"There is a dramatic slow down in the northwards motion of the Indian plate around 50 million years ago that has long been attributed to the initial collision of India with the Eurasian plate," said Cande, a professor of marine geophysics in the Geosciences Research Division at Scripps.

"An implication of our study is that the slow down might just reflect the waning of the mantle plume-the actual collision might have occurred a little later."