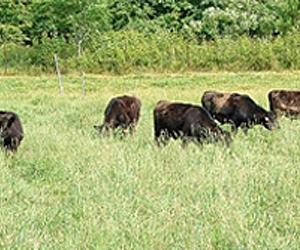 What is a bit surprising about this type of work is that we are only doing this now.  It is an obvious question that deserves an answer.  Of course, in the past, perhaps herds were smaller and shifts of large herds to different grazing grounds were both common and necessary depending on the season.

Allowing pasture to properly restore itself is surely good husbandry and this merely confirms it.  Grass constantly cropped at several inches will not be regenerating a healthy root system and this slowly degrades over time.  After all, just how deep does a lawn’s root system go?  Yet those grasses are quite capable of going much deeper.

It surely applies in a pasture and it is better to allow an optimal growth before grazing starts.  I suspect that traditional farming on small acreages did exactly that as best as they were able.

The continuously grazed ranches in each county were stocked at approximately the same stocking rates from year to year over at least the previous nine years. They were otherwise selected by the Natural Resource Conservation Service technical staff in each county as being representative of traditional continuous-grazing ranches in the region.

At the ranch scale, when multi-paddock grazing is managed to give best vegetation and animal performance, it is superior to continuous grazing in relation to conservation and restoration of resources, provision of ecosystem goods and services, and ranch profitability, he said.

Teague said this study differed from those conducted by researchers who investigated multi-paddock grazing in relatively small experimental areas, without managing adaptively the way a successful, conservation-oriented commercial rancher would.

In rangeland ecosystems, maintaining normal soil and ecosystem function over the landscape and watershed is possible only if there is adequate plant cover and species composition to provide protection from soil loss, he said. This allows microorganisms to prosper and maintain ecosystem functions such as water-holding capacity, control of erosion, soil fertility and forage production, he said.

"In our study we examined the accumulated impacts of nine years of different grazing management categories on vegetation and soil parameters at a commercial-ranch scale," he said.

The study evaluated the impact of multi-paddock grazing at a high stocking rate compared to light continuous and heavy continuous grazing on neighboring commercial ranches in three proximate counties in tall grass prairie. The same management had been conducted on all ranches for at least the previous nine years.

Soil compaction was lowest with multi-paddock grazing and ungrazed areas and highest with heavy continuous grazing, he said.

"This study documents the positive results for long-term maintenance of resources and economic viability by ranchers who use adaptive management and multi-paddock grazing relative to those who practice continuous season-long stocking," he said.

The general management on the ranches using multiple paddocks per herd was to graze a pasture lightly to moderately for one or three days, followed by a recovery period of approximately 30-50 days and 60-90 days during fast and slow growing conditions, respectively.

This resulted in two light-to-moderate defoliations during the growing season with regrazing before the majority of plants switched from vegetative to reproductive phases, Teague said. This kept the plants in a leafy, vegetative condition during the growing season to provide a high level of forage quality for the livestock and to ensure the best possible forage regrowth after defoliation.

During drought periods, animal numbers were adjusted to match forage amounts. In the winter, the goal was to graze and trample most of the standing forage to enhance litter cover and minimize self-shading that would limit plant growth in the following spring, he said.

The continuously grazed ranches in each county were stocked at approximately the same stocking rates from year to year over at least the previous nine years. They were otherwise selected by the Natural Resource Conservation Service technical staff in each county as being representative of traditional continuous-grazing ranches in the region.

"The results we measured, representing the combined positive effects of multi-paddock management, indicate the multiple advantages of this management option," Teague said. "Multi-paddock grazing resulted in a higher proportion of desirable tall grasses, a lower proportion of less desirable short grasses, annual winter-growing grasses and forbs, and higher standing crop, even with a higher stocking rate than the lightly stocked continuous grazing."

Although the stocking rate was less with lightly stocked continuous grazing, the preferred plants and areas were never allowed any recovery under continuous grazing while multi-paddock grazing, correctly managed, prevented overgrazing and allowed for adequate recovery after defoliation, he said.

By ensuring light-to-moderate use in the growing season with adequate recovery, the preferred forages are able to capitalize on good growing conditions, Teague said.

"The use of multiple paddocks per herd on commercial ranches spreads grazing over the entire landscape in the numerous smaller paddocks, rather than allowing a concentration of grazing pressure on preferred areas in the landscape," Teague said.

"It also provides the manager with the option of regulating the grazing pressure on preferred areas and plants by adjusting when to move animals to a new paddock, and provides the means to allow grazed plants to recover before they are grazed again.

"If managers adaptively respond to the ever-changing climate by changing the periods of grazing and time allocated for plant recovery, and adjust livestock numbers to match the available feed, as the multi-paddock grazers in this study did, negative effects of grazing by the livestock can be minimized."