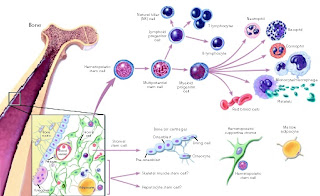 We have always imagined been able to replace a damaged joint surface with a porous scaffold material into which stem cells are introduced.  The problem was the simple creation of a useful supply.  That now appears to be solved.

The discoveries are now coming thick and fast and we can expect to repair or replace just about everything in the human body inside the next decade.  The only constraint is the regulatory system, but that now has many other participants globally and will simply be overwhelmed.

This is particularly great news for the elderly who often face a serious decline in their quality of life sometimes surprisingly early.

Scientists at the Universities of Glasgow and Southampton have uncovered a new method for culturing adult stem cells which could lead to the creation of revolutionary stem cell therapies for conditions such as arthritis, Alzheimer's disease and Parkinson's disease.
The research, funded by the Biotechnology and Biological Sciences Research Council (BBSRC) and the University of Glasgow and published in the journal Nature Materials, shows how a new nanoscale plastic can cheaply and easily solve a problem which has previously made the expansion of stem cells for therapeutic purposes impossible.


Nature Materials - Nanoscale surfaces for the long-term maintenance of mesenchymal stem cell phenotype and multipotency
Currently, when adult stem cells are harvested from a patient, they are cultured in the laboratory to increase the initial yield of cells and create a batch of sufficient volume to kick-start the process of cellular regeneration when they are reintroduced back into the patient.


The process of culturing is made more difficult by spontaneous stem cell differentiation, where stem cells grown on standard plastic tissue culture surfaces do not expand to create new stem cells but instead create other cells which are of no use in therapy. Currently, stem cell expansion is often boosted by immersing the cells in chemical solutions which help to increase the overall yield of stem cells but are limited in their effectiveness.


The new nanopatterned surface, developed and fabricated at the , is designed to offer a method of stem cell expansion which is much easier to manufacture and use than anything currently available. Created by an injection-moulding process similar to that which is used to manufacture Blu-ray discs, the surface is covered with 120-nanometre pits which the researchers have found is much more effective in allowing stem cells to grow and spread whilst retaining their stem cell characteristics.


Dr Matthew Dalby from the University of Glasgow, who led the research alongside colleague Dr Nikolaj Gadegaard and Prof Richard Oreffo of the , said: "Until now, it's been very difficult to grow stem cells in sufficient numbers and maintain them as stem cells for use in therapy. What we and our colleagues at the University of Southampton have shown is that this new nanostructured surface can be used to very effectively culture mesencyhmal stem cells, taken from sources such as bone marrow, which can then be put to use in musculoskeletal, orthopaedic and connective tissues."


"If the same process can be used to culture other types of stem cells too, and this research in under way in our labs, our technology could be the first step on the road to developing large-scale stem cell culture factories which would allow for the creation of a wide range of therapies for many common diseases such as diabetes, arthritis, Alzheimer's disease and Parkinson's disease. We’re very excited about the potential applications of the technology and we’re already in the early stages of conversations to make the surface commercially available."


Professor Richard Oreffo, who led the team, added: "Development of platform technologies that allow the scale up of skeletal or mesenchymal stem cells offers a whole new approach to skeletal regenerative medicine. If this new technology enables us to create sufficient stem cells, and to pattern hip implants for example, it could herald the development of new medical devices with therapeutic application and approaches to understanding stem cell fate and regulation."


"It is important to realise the ability to retain skeletal stem cell phenotype using surface topography offers a step change in current approaches for stem cell biology. The implications for research and future interventions for patients with arthritis and other musculoskeletal diseases are substantial."


Professor Douglas Kell, Chief Executive, BBSRC, said: “Understanding how stem cells are affected by their environment is key to appreciating how they might be grown in sufficient quantities to be used in research or as therapies. This research shows that the physical surface that the cells are grown on can actually affect their fundamental biology in ways that are useful for us.


"Multidisciplinary research is increasingly important and this project is a great example where cell biology, medicine, and engineering come together in powerful synergy to solve a complex problem."
There is currently an unmet need for the supply of autologous, patient-specific stem cells for regenerative therapies in the clinic. Mesenchymal stem cell differentiation can be driven by the material/cell interface suggesting a unique strategy to manipulate stem cells in the absence of complex soluble chemistries or cellular reprogramming. However, so far the derivation and identification of surfaces that allow retention of multipotency of this key regenerative cell type have remained elusive. Adult stem cells spontaneously differentiate in culture, resulting in a rapid diminution of the multipotent cell population and their regenerative capacity. Here we identify a nanostructured surface that retains stem-cell phenotype and maintains stem-cell growth over eight weeks. Furthermore, the study implicates a role for small RNAs in repressing key cell signalling and metabolomic pathways, demonstrating the potential of surfaces as non-invasive tools with which to address the stem cell niche.