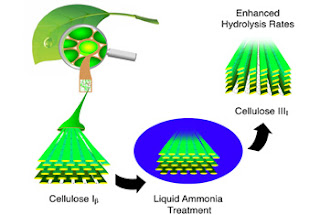 This is progress on the cellulose front and quite important.  As described, cellulose is tightly bound together and this hugely slows biological attack on the cellulose.  It is shown that pretreatment protocols can loosen this up and more importantly points in the proper direction for further work.

A five times improvement is touted here but that is likely still a pretty lousy yield in terms of industrial efficiency.  It is still serious progress.

Without question, conveniently converting plant waste which is mostly cellulose and lignums into a fuel stock is an attractive trick for agriculture.  In fact we presently have two potential options for plant waste besides the wasteful application of burning.  This option is the best long term application because it will provide useful fuels to the farm itself and allow a high level of self sufficiency.  The second option is to convert plant waste into biochar which even if it takes twenty years will go to a limit point in which the soil is sufficiently improved as to become unnecessary.

In the meantime we are approaching a world of cheap electrical energy and all this will become unnecessary unfortunately.

Los Alamos has found a potential key for unlocking the energy potential from non-edible biomass materials such as corn leaves and stalks, or switch grass. A potential pretreatment method that can make plant cellulose five times more digestible by enzymes that convert it into ethanol, a useful biofuel.

Journal of the American Chemical Society - Restructuring the Crystalline Cellulose Hydrogen Bond Network Enhances Its Depolymerization Rate
Conversion of lignocellulose to biofuels is partly inefficient due to the deleterious impact of cellulose crystallinity on enzymatic saccharification. We demonstrate how the synergistic activity of cellulases was enhanced by altering the hydrogen bond network within crystalline cellulose fibrils. We provide a molecular-scale explanation of these phenomena through molecular dynamics (MD) simulations and enzymatic assays. Ammonia transformed the naturally occurring crystalline allomorph Iβ to IIII, which led to a decrease in the number of cellulose intrasheet hydrogen bonds and an increase in the number of intersheet hydrogen bonds. This rearrangement of the hydrogen bond network within cellulose IIII, which increased the number of solvent-exposed glucan chain hydrogen bonds with water by 50%, was accompanied by enhanced saccharification rates by up to 5-fold (closest to amorphous cellulose) and 60–70% lower maximum surface-bound cellulase capacity. The enhancement in apparent cellulase activity was attributed to the “amorphous-like” nature of the cellulose IIII fibril surface that facilitated easier glucan chain extraction. Unrestricted substrate accessibility to active-site clefts of certain endocellulase families further accelerated deconstruction of cellulose IIII. Structural and dynamical features of cellulose IIII, revealed by MD simulations, gave additional insights into the role of cellulose crystal structure on fibril surface hydration that influences interfacial enzyme binding. Subtle alterations within the cellulose hydrogen bond network provide an attractive way to enhance its deconstruction and offer unique insight into the nature of cellulose recalcitrance. This approach can lead to unconventional pathways for development of novel pretreatments and engineered cellulases for cost-effective biofuels production
.

In a paper appearing in today’s Journal of the American Chemical Society, Los Alamos researchers S. Gnanakaran, Giovanni Bellesia, and Paul Langan join Shishir Chundawat and Bruce Dale of Michigan State University, and collaborators from the Great Lakes Bioenergy Research Center in describing a potential pretreatment method that can make plant cellulose five times more digestible by enzymes that convert it into ethanol, a useful biofuel.

Biomass is a desirable renewable energy source because fermentable sugars within the cellulose network of plant cells can be extracted with enzymes and then converted into ethanol—if only it were so simple. One of the key difficulties in creating biofuels from plant matter is that the cellulose tends to orient itself into a sheet-like network of highly ordered, densely packed molecules. These sheets stack upon themselves and bond together very tightly due to interactions between hydrogen atoms—somewhat like sheets of chicken wire stacked together and secured by loops of bailing wire. This stacking and bonding arrangement prevents enzymes from directly attacking most of the individual cellulose molecules and isolating the sugar chains within them.

Currently, ethanol can only be extracted in usable quantities if the biomass is pretreated with costly, potentially toxic chemicals in an energy-intensive process. Now, however, the research team has discovered a way to develop potentially cost-effective pretreatment methods that could make biomass an economically viable contender in the biofuels arena.

Using recent experimental data provided by their journal collaborators, Gnanakaran and his colleagues used state-of-the-art computational methods and molecular modeling to examine how cellulose changes structurally into an intermediate form that can be enzymatically attacked when pretreated with ammonia.

“Our modeling showed, and the experimental evidence confirmed, that the pretreatment reduced the strength of hydrogen bonds in the cellulosic network,” said Gnanakaran. It was as if the bailing wire in the bound chicken-wire analogy had been removed and replaced more loosely with thread. This, in turn, significantly reduced the tightness of the cellulose network and left it more vulnerable to conversion into sugar by fungi-derived cellulolytic enzymes.

The end result is a potentially less costly and less energy intensive pretreatment regimen that makes the cellulose five times easier to attack.

“This work helps address some of the potential cost barriers related to using biomass for biofuels,” Gnanakaran said.

In addition to LANL, the GLBRC, and , the paper included collaborators from and the Department of Agriculture’s Forest Products Laboratory in .

The LANL work is funded in part by the Laboratory-Directed Research and Development Program. Computing resources used in the research are housed at and provided under LANL institutional computing.

Los Alamos National Laboratory, a multidisciplinary research institution engaged in strategic science on behalf of national security, is operated by Los Alamos National Security, LLC, a team composed of Bechtel National, the University of California, The Babcock & Wilcox Company, and URS for the Department of Energy’s National Nuclear Security Administration.

The Great Lakes Bioenergy Research Center (GLBRC) is one of three Department of Energy Bioenergy Research Centers funded to make transformational breakthroughs that will form the foundation of new cellulosic biofuels technology. The GLBRC is led by the University of Wisconsin-Madison, with as the major partner. Additional scientific partners are DOE National Laboratories, other universities and a biotechnology company. For more information on the GLBRC, visit www.glbrc.org.