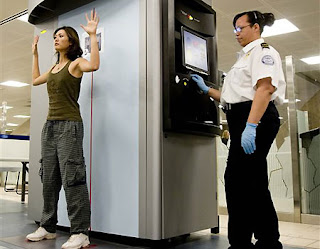 It still should be early days in terms of actual cancer occurrences, so I think someone is jumping the gun on this story.  Yet the arguments are real enough.  Radiation is used to image the human body, so where is the detailed test data and the supporting interpretive reports?

This is hardly an area were excuses can be tolerated.

In fact the criticisms presently cited regarding these devices are there because the public relations has been handled poorly and one may reasonably presume an ongoing denial in the face of real ignored data.  This is no surprise when a contractor has over promised and then must deliver a turkey.

The truth may just be something no PR can sugar coat.

(NaturalNews) In a new twist to the TSA saga to which we can only say, "We told ya so," the Electronic Privacy Information Center (EPIC) has obtained documents through the Freedom of Information Act (FOIA) that reveal TSA employees are reporting "cancer clusters" among their own employees who work near radiation body scanners. At the same time, DHS refuses to issue dosimeters to TSA employees because, obviously, those dosimeters would indicate alarming levels of radiation exposure. So it's better to just keep everyone ignorant and keep irradiating all the TSA employees and hope nobody notices, apparently.


That TSA employees are giving themselves cancer by irradiating innocent travelers is perhaps the most striking bit of tragic justice we've yet seen in this entire fiasco. TSA agents commit felony crimes every single day against innocent travelers, molesting them, illegally detaining them and humiliating them as part of the "security screening" procedures. They're also irradiating them with the naked body scanners that we all know Janet Napolitano openly lied about (http://www.naturalnews.com/032839_b...). As a side effect of that irradiation effort, TSA employees are also irradiating themselves. Cancer, not surprisingly, will not be far behind.


By the way, the best and most timely reporting on this subject is currently coming from Paul Joseph Watson at PrisonPlanet.com, who, together with Alex Jones leading the protests, has been hammering both the TSA and the Texas legislature over these criminal pat-downs (http://www.prisonplanet.com/cancer-...). In an age where nearly all mainstream journalism is little more than comedic shilling for Big Government, it's refreshing to know that people like Watson are still pursuing the role of honest journalism that questions government's lies (as in the Nixon era).

Why are the body scanners causing cancer clusters among TSA employees? As we reported yesterday, Janet Napolitano lied about the safety of the devices, claiming that NIST had "affirmed the safety" of them. NIST fired back an email that specifically explained NIST doesn't test the safety of products at all! Ever! Therefore, all the claims that these devices were tested and confirmed as safe was complete B.S. from Napolitano. Just an outright lie. Not a shred of truth to be found.


You see, when government has abandoned the truth as a matter of policy, it can only resort to lies to further its agenda. The truth no longer has any place in the government, where criminals and thugs simply make up whatever lies they want and then pass them off as "truth" to the press (which dutifully reports all government lies as truths). This is precisely the case with the TSA and these naked body scanners. It's also the situation with the economy, the unemployment rate and the national debt, if you follow economic news. The American empire has become what the was right before its fall: A tragic cabal of professional thieves and liars who run the government and steal from the People.

TSA employees fry their own genitals with radiation

Now, even though the NIST did not test the safety of these machines, it did warn airport screeners to avoid standing next to them because the machines clearly emitted doses of radiation that could mutate DNA and cause cancer.


The bulk of TSA employees, who we've already established are among the most intellectually-challenged individuals which are still somehow employable, don't seem to care that they're getting fried with radiation every day on the job. In fact, many TSA employees don't even understand the laws of physics, as has been demonstrated over and over when they tell travelers truly idiotic things like, "There's no radiation from these machines." (True story. This is what one of our contributing writers was told by a TSA agent in .)


The one notable upshot from all this is the realization that TSA agents might experience so much DNA damage from standing next to those machines that they will be rendered completely infertile and therefore have no ability to reproduce. This, the scientists say, is called "natural selection." Those best adapted to surviving will pass on their genes to the next generation, while those who fail to protect the integrity of their own DNA get removed from the human gene pool. I can't think of a more appropriate example of natural selection in action. Darwin eats TSA agents as a mid-morning snack, it seems. So maybe those radiation machines do have a purpose after all...


All kidding aside, there's a kind of poetic justice in the idea that these agents who terrorize innocents will one day find themselves on the receiving end of a chemotherapy drip. It's not that we wish suffering upon anyone, but this is a suffering they have brought upon themselves. At what point, I wonder, will the cancer-stricken TSA employees finally figure out the government is lying to THEM, too?


That's a realization shared by many veterans who sign up for military service with all sorts of patriotic enthusiasm and then one day realize the government has stolen their health benefits and abandoned their needs. Such is the result of naive faith in a government that couldn't care less about the people it claims to serve. Well, heck, I'm not even sure the government continues that "serving the people" cover story anymore. Now, the government openly claims to be the supreme power over the servant people.
Learn more at EPIC

You can read up on the FOIA documents, the cover-ups, the lies and more at the EPIC website: http://epic.org/privacy/airtravel/b...

There, you'll find details about the lawsuit, supporting legal documents and more. Thank goodness we have EPIC, huh? I encourage you to consider making a donation to this outstanding non-profit group. They consistently produce important victories in the fight to defend your privacy and freedoms.


Also, of course, stay tuned in to www.PrisonPlanet.com where Alex Jones is leading the popular revolt against the TSA. Reaching over 24 million listeners a month, his radio show is probably one of the top three in the nation, and he doesn't hold back. From time to time, I occasionally serve as a fill-in host for Alex when he's traveling, so I'm very familiar with his operation there and how hard his entire team works to bring you freedom-oriented news six days a week. (It's an exhausting job.) Not everybody enjoys Alex's boisterous approach to delivering information, but I think it's entirely appropriate given how far our government has descended down the path of tyranny and corruption.


This is not a time to stay silent. Unless, for some reason, you just enjoy having your reproductive organs irradiated by a body scanning machine that's probably giving the TSA's own employees cancer right this minute.

Learn more:
http://www.naturalnews.com/032841_body_scanners_cancer.html#ixzz1QgYjs09t
Posted by arclein at 12:01 AM