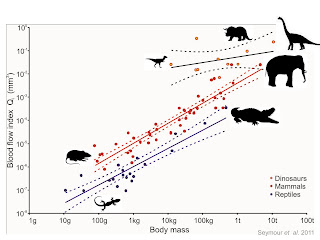 This work finally resolves the question regarding the blood temperature of dinosaurs, or at least for the majority of them.  The balance has swung in favor of warm blooded metabolism once we understood that birds were their direct descendents.

Here we discover that they are even more warm blooded than mammals and ourselves.  That is a surprise.

The fact is that the dinosaur genus was hugely active and we are best to think in terms of oversized hyper active chickens.  Suddenly Tyrannosaurus Rex is galloping along at forty miles per hour and jumping on its prey.  Jurassic park only had the half of it.

The slower moving vegetarians had every need to be protected with armor or serious speed as they do today.

And as noted, this provides a simple measurement to understand maximum levels of activity from any sample. 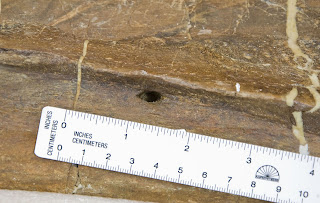 New research from the University of Adelaide has added to the debate about whether dinosaurs were cold-blooded and sluggish or warm-blooded and active.

Professor Roger Seymour from the University's School of Earth & Environmental Sciences has applied the latest theories of human and animal anatomy and physiology to provide insight into the lives of dinosaurs. The results will be published this month in Proceedings B, the Proceedings of the Royal Society B (Biological Sciences), and can now be found online at: http://dx.doi.org/10.1098/rspb.2011.0968

Newswise — Human thigh bones have tiny holes – known as the 'nutrient foramen' – on the shaft that supply blood to living bone cells inside. New research has shown that the size of those holes is related to the maximum rate that a person can be active during aerobic exercise. Professor Seymour has used this principle to evaluate the activity levels of dinosaurs.

"Far from being lifeless, bone cells have a relatively high metabolic rate and they therefore require a large blood supply to deliver oxygen. On the inside of the bone, the blood supply comes usually from a single artery and vein that pass through a hole on the shaft – the nutrient foramen," he says.

Professor Seymour wondered whether the size of the nutrient foramen might indicate how much blood was necessary to keep the bones in good repair. For example, highly active animals might cause more bone 'microfractures', requiring more frequent repairs by the bone cells and therefore a greater blood supply.

"My aim was to see whether we could use fossil bones of dinosaurs to indicate the level of bone metabolic rate and possibly extend it to the whole body's metabolic rate," he says. "One of the big controversies among paleobiologists is whether dinosaurs were cold-blooded and sluggish or warm-blooded and active. Could the size of the foramen be a possible gauge for dinosaur metabolic rate?"

Comparisons were made with the sizes of the holes in living mammals and reptiles, and their metabolic rates. Measuring mammals ranging from mice to elephants, and reptiles from lizards to crocodiles, one of Professor Seymour’s Honours students, Sarah Smith, combed the collections of Australian museums, photographing and measuring hundreds of tiny holes in thigh bones.

"The results were unequivocal. The sizes of the holes were related closely to the maximum metabolic rates during peak movement in mammals and reptiles," Professor Seymour says. "The holes found in mammals were about 10 times larger than those in reptiles."

These holes were compared to those of fossil dinosaurs. Dr Don Henderson, Curator of Dinosaurs from the Royal Tyrrell Museum in Alberta, Canada, and Daniela Schwarz-Wingsfrom the Museum für Naturkunde and Humboldt University Berlin, Germany, measured the holes in 10 species of dinosaur from five different groups, including bipedal and quadrupedal carnivores and herbivores, weighing 50kg to 20,000kg.

"On a relative comparison to eliminate the differences in body size, all of the dinosaurs had holes in their thigh bones larger than those of mammals," Professor Seymour says.

"The dinosaurs appeared to be even more active than the mammals. We certainly didn’t expect to see that. These results provide additional weight to theories that dinosaurs were warm-blooded and highly active creatures, rather than cold-blooded and sluggish."

Professor Seymour says following the results of this study, it's likely that a simple measurement of foramen size could be used to evaluate maximum activity levels in other vertebrate animal groups, both living and fossils.