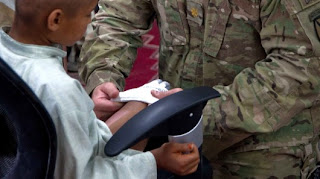 Stuff like this is way more important than a thousand research projects.  It is the culmination of ample practical experience however unwelcome and a shot of practical common sense.  It can also apply back home and anywhere else these horrible injuries take place.

The fact is that we have learned how to make an amputee mobile.  It was not easy, but this now allows us to produce cheap fixes were it is necessary.  This is a real gift to war torn areas and until we learn how to regrow limbs, it will have to do.

We all have friends who are trapped in their bodies.  It is only now that we are seeing the light at the end of that tunnel.  In twenty years, I expect that any such damage will be simply restored by regrowth.  Thus every one of today’s victims have real hope.

While we've covered many developments in the field of prosthetics, such high-tech advances are beyond the reach of those in the developing world where the rates of amputation due to war are highest. Now U.S. Army soldiers stationed in Afghanistan have developed a simple prototype prosthetic leg that can be constructed using local resources to allow the victims of improvised explosive devices (IEDs) and land mines to get back on their feet quickly and cheaply.

Although he says he could have contacted a charity in the U.S. to get high-quality prosthetic limbs for a handful of victims near Forward Operating Base Pasab, Afghanistan, Dr. (Maj.) Brian Egloff, brigade surgeon, Headquarters and Headquarters Company, 3rd Brigade Combat Team, said it would only have been a temporary solution and so he and his colleagues set about finding an enduring design for a prosthetic leg.

The result was a prototype consisting of a simple cast attached to a metal rod with a flat hooked foot. The cast can be fitted in as little as a day and can be recast to accommodate the growth of the wearer. The metal rod and flat hook can be easily reproduced and allow the patient to walk more naturally.

An eight-year-old boy who lost both legs after stepping on a land mine and needed to be carried around on his father's back received the first prototype leg on June 26, 2011.

"It helped knowing that the leg was for a small 8-year-old boy who was happy all the time - despite his situation," said Warrant Officer Brian Terry, 710th Brigade Support Battalion, 3rd BCT, who constructed the prototype.

"This patient and people like him have no mobility whatsoever," added Egloff. "It's all about increasing mobility and allowing them to live a more productive lives."

Terry said the next step is for the Afghan doctors in this region to make their own prosthetics and to train them how to instruct victims on the use of the leg.