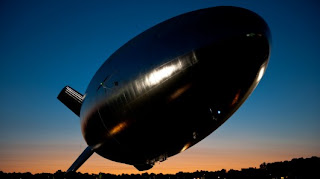 This is an unmanned craft that is designed to provide monitoring of a million cubic mile volume of air space on a continuous basis.  One of these over all highly populated areas will soon be seen as highly desirable.

It would actually make abduction scenarios almost impossible because of the sheer density of information that can be available.  It also makes break and enter activities equally futile.  A true eye in the sky is certainly on the way and this will surely be the way to deliver that capability cheaply.

It will not make serious crime obsolete but it will end many options.  Recall how telephone harassment ended forever once the caller’s phone number became traceable.  What had been a serious irritant disappeared.

Such craft can stay aloft for days, if not weeks at a time and will be designed to do just that.  Yet they are quick enough to be brought down for servicing early in the morning and sent back up in a couple of hours.  The round trip time I am sure will also be cut drastically.

Just for law enforcement and protection from criminal initiatives, such a service is welcome. 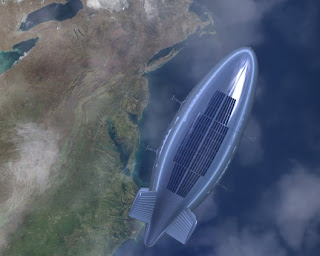 With the use of airships for passenger transport decreasing in the early 20th century as their capabilities were eclipsed by those of airplanes - coupled with a number of disasters - they were largely resigned to serving as floating billboards or as camera platforms for covering sporting events. But the ability to hover in one place for an extended period of time also makes them ideal for intelligence, surveillance and reconnaissance purposes, which is why Lockheed Martin has been developing its High Altitude Airship (HAA). The company yesterday launched the first-of-its-kind High Altitude Long Endurance-Demonstrator (HALE-D) to test a number of key technologies critical to development of unmanned airships.

The HALE-D is a sub-scale demonstrator made with high-strength fabrics and featuring thin-film solar arrays serving as a regenerative power supply. Lightweight propulsion units propel the airship aloft and guide it during takeoff and landing as well as maintaining its geostationary position above the Jetstream at an altitude of 12 miles.

The geostationary positioning coupled with modern communications technologies give the airship capabilities on par with satellites at a fraction of the cost. In position, the airship would survey a 600-mile (965 km) diameter area and millions of miles of cubic airspace. It will also be reconfigurable with the ability to easily change payload equipment, making the HAA significantly cheaper to deploy and operate than other airborne platforms to support missions for defense, homeland security, and other civil applications, according to Lockheed Martin.

Lockheed Martin launched its HALE-D at 5:47 a.m. on July 27, 2011 out of an airdock in Akron, . The airship was aiming to reach an altitude of 60,000 ft. but encountered technical difficulties at 32,000 ft., which prevented it from reaching its target so the flight was terminated. It then descended at 8.26 a.m., landing in southwestern at a predetermined location. Lockheed Martin is coordinating with state and local authorities to recover the airship from the heavily wooded area in which it landed, but confirmed that no injuries or damage were sustained.

Lockheed Martin has built more than 8,000 lighter-than-air platforms since receiving its first production contract in 1928. The U.S. Army Space and Missile Defense Command/Army Forces Strategic Command (SMDC/ARSTRAT) contracted with Lockheed Martin to develop the High Altitude Airship program to improve the military's ability to communicate in remote areas such as those in Afghanistan, where mountainous terrain frequently interferes with communications signals.

If you are using nuisance phone calls as an example of the benefits of this sort of technology, the failure will be spectacular. I receive 1-5 "nuisance" phone calls a day, because the caller-id function is so easily spoofed. If this technology works so "well" then the rate of break-ins and abductions will actually increase.