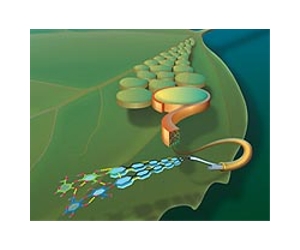 This work awakens us to the possibilities of brown rot chemistry in the future of biomass conversion.  We learn that brown rot sidesteps the whole lignin issue and surely save a huge amount of energy in the process.

The other take home that comes out of this by inference is that the Carboniferous age accumulation was a direct result of a lack of a rotting process that reduced the plant waste.  Original work assumed excess CO2 as the causation.

Appling this new knowledge suggests that viable methods for biomass conversion into biofuels may well become a reality.

Breaking down cellulose without blasting lignin

Feared by realtors and homeowners alike, dry rot due to the fungus Serpula lacrymans causes millions of dollars worth of damage to homes and buildings around the world.

This brown rot fungus' capacity to break down the cellulose in wood led to its selection for sequencing by the U.S. Department of Energy (DOE) Joint Genome Institute (JGI) in 2007, with the goal of identifying the enzymes involved in the degradation process and using the information to improve cellulosic biofuels production.

As reported online July 14 in Science Express, an international team of scientists including DOE JGI researchers compared the genome of Serpula lacrymans, the second brown rot fungus to have its genome sequenced, against 10 other published fungal genomes. The DOE JGI sequenced seven of these genomes among them Postia placenta, the first brown rot fungus sequenced.

The analysis not only allowed researchers to understand the chemical reactions involved in the mechanism by which Serpula breaks down cellulose, it also sheds light on the role of brown rot fungi in the development of the largest terrestrial ecosystem - the subarctic cool climate boreal forest - and therefore the fungi's role in the global carbon cycle.

"It's one of those fungi that everybody knows. It has such an aggressive form of cellulose breakdown," said study first author Dan Eastwood of .

He pointed out that the ability of wood-decaying fungi in general to break down lignocellulose is linked to the co-evolution of boreal forests and fungi. "It is also important to realize the role of these fungi in the natural environment," he said.

"For example, if you go back far enough in time to the period when trees were developing, there was no way to break lignocellulose down, which led to the coal seams we tap today. When the fungi figured out how to break down lignocellulose, the coevolution of the fungi and trees kick-started the carbon cycle again.

The ancestor of all wood decay fungi we have today was a white rot and it was fungi derived from this ancestor which kick started the carbon cycle and lignocellulose decomposition.

The brown rots evolved later from a white rot ancestry and, because they circumvent the lignin and go straight for the hemicellulose and cellulose, they are considered more efficient and is probably why they have been able to dominate boreal forests in more recent times."

The analyses of the 48.2-million nucleotide genome of S. lacrymans not only allowed the team to compare the gene families involved in the mechanisms by which brown rot break down cellulose and white rot fungi break down both cellulose and lignin, but also how these processes differ within each category.

For example, Eastwood noted that the chemistry Serpula uses is slightly different from the chemistry that goes on in Postia, though in a larger sense between white rot and brown rot,

"what we describe here is a refinement of the genes, what genes are absolutely necessary to break down cellulose," he said. "Part of that is the machinery to break down wood became simpler since brown rot fungi are not breaking down lignin."

Study senior author Sarah Watkinson of the emphasized the role of brown rot fungi in the global carbon cycle, noting that a third of the carbon sequestered in the soil of boreal forests are composed of the wood residues after the fungi break down the cellulose. "When it grows in forests, it decays the wood and leaves behind the lignin," she said.

"We're very interested in what puts carbon into the soil as the residues of brown rot fungi contribute up to 30 percent of carbon in conifer forest soils, and conifer forests are a very large biome in the world and one of the largest carbon sinks on land. The activity of brown rot is very significant in global carbon cycling and I think that hasn't really been appreciated before."

Eastwood added that the work impacts so many different fields, deciding what to do next is "like being a child in a sweet shop: where do we start?" One application that Jonathan Schilling, a professor at the who was not involved in the project, sees for the Serpula genome is that it can teach bioenergy researchers about improving the process by which plant biomass is converted for biofuel production.

"What we have right now with current bioconversion processes often resembles a white rot approach," he said, "attacking lignin to get at carbohydrates and then converting them to fuels, chemicals or paper.

The brown rot fungi have somehow circumvented that step to more efficiently get at the cellulose instead of blasting lignin, and it has evolved multiple times in different white rot lineages. This suggests an upgrade in efficiency and we should pay attention."

He also said that having a second brown rot genome reference data set, particularly one from such a well-studied fungus that has retained some familiar cellulolytic mechanisms for white rot yet causes a classic brown rot, adds on to the body of knowledge researchers have for the six different lineages of brown rot fungi and their adaptive advantages to white rot fungi.

DOE JGI Fungal Genomics head Igor Grigoriev, a coauthor on the Science paper, noted that having the genome of Serpula means that there are now two white rot and two brown rot genomes available, and a dozen more are in queue.

He added there are two variants of Serpula, the one that causes dry rot and one found in coniferous forests, and the DOE JGI has sequenced both. In fact, the Institute's sequencing efforts account for 40 percent of all fungal genomes deposited in the public databases.

"This is a step forward into learning more about the processes involved in cellulose degradation," he said. Beyond the interest in understanding how lignocellulose is broken down, though, he said, "overall we're getting to the point where we can do comparisons across the three fungal lifestyles: saprotrophs, which include wood-degraders, symbionts and pathogens, and we are entering the stage where we find that there are no clear, black and white associations with each category."

Co-senior author Francis Martin from the French National Institute of Agriculture Research (INRA) who has been an integral driver in many of the DOE JGI's fungal genome projects, stressed the importance of this work in understanding the evolution of forest fungi. "Serpula is the 'missing link' along the 'saprotrophism-mutualism continuum,'" Martin said.

"Both the brown rot Serpula and symbiont Laccaria bicolor-also sequenced by the DOE JGI-lack the most aggressive wood-degrading enzymes used by white rot fungi in breaking down the unusable lignin matrix of wood to unmask useable cellulose embedded within it.

"Loss of this aggressive lignin breakdown mechanism might have permitted brown rot's transition to mycorrhizal mutualists-that foster a beneficial association between the fungus and the plant roots-enabling preferential access to carbohydrates within the tree."
This study, Martin concluded, "adds to our incremental understanding of the rise of these processes, particularly as they relate to tree health and productivity, which play pivotal roles in terrestrial carbon cycling, sequestration, and other biogeochemical cycles, as well as for informing new strategies for biomass deconstruction for improved biofuels."