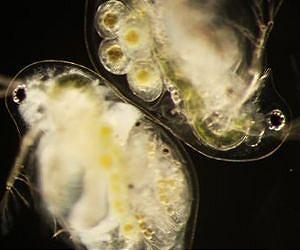 As usual it is never so simple, although the case examined appears to be pretty unique.  That may not be true of course and I suspect a lot of grad students now have a ready made thesis subject in discovering similar ‘balanced’ relationships.

Certainly as applied to the world of the small such as insects and microbes, these types of relationships must arise over and over again.

The real lesson is to not just accept the obvious argument in terms of predator herd management.  Lest we forget, large herds do become susceptible to infectious diseases such as the rinderpest.

This image shows an aquatic crustacean, Daphnia dentifera, that's infected with the yeast parasite Metschnikowia (on the left) next to one that's not infected (on the right). The parasite, looking like small puffs of cotton, can be seen under the eye and along its back. Credit: Meghan Duffy/GeorgiaTech.

Biologists worldwide subscribe to the healthy herds hypothesis, the idea that predators can keep packs of prey healthy by removing the weak and the sick. This reduces the chance disease will wipe out the whole herd, but could it be that predators can also make preypopulations more susceptible to other predators or even parasites?

Biologists at the Georgia Institute of Technology have discovered at least one animal whose defenses against a predator make it a good target for one opportunistic parasite. The research appears online in the journal Functional Ecology.

"We found that strategies that prey use to defend themselves against predators can increase their susceptibility to infection by parasites," said Meghan Duffy, assistant professor in Georgia Tech's .

Duffy, along with colleagues at the University of Illinois at Urbana-Champaign and Indiana University, took a look at a small aquatic crustacean, Daphnia dentifera, a water flea known to be an important part of freshwater ecosystems.

They exposed the crustacean to chemicals emitted by one of its predators, a phantom midge larva known as Chaoborus, known to feed on it. When the Daphnia detected those chemicals it grew larger, making it harder for its predator to get its mouth around it.

"Unfortunately for the Daphnia, this defense against predation makes them more vulnerable to parasitism," said Duffy.

That's because while growing larger keeps Daphnia safe from Chaoborus, it actually makes it more susceptible to a virulent yeast parasite, known as Metschnikowia. When Daphnia senses a threat from its predator and grows larger, it ends up consuming more of these parasitic yeasts than it does when normal size.

When the yeast infects the crustacean, it kills it, causing the dead animal to release yeast spores as it decomposes. The larger the host, the more spores it releases back into the water to prey on other Daphnia.

"Since they need to grow larger to defend themselves against the predator but the opposite to defend against the parasite, they're sort of stuck between a rock and a hard place," she added.

Duffy reasons that this occurs because the predators are common year-round, while the parasites are more episodic in nature, with their populations expanding in epidemics only in the fall and not even yearly.

This results in long periods of predation in the absence of the parasite, which probably explains why they respond so strongly to defend themselves against the predator even though it decreases their defenses against the yeast, she added.

"While some have argued for increasing predator densities to control disease, our results suggest that it is important to consider the indirect effects of predators, such as the one we found in which trying to avoid oneenemy increases the hosts vulnerability to another," said Duffy.