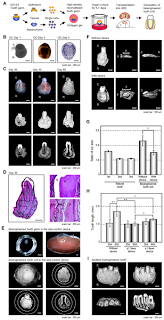 The achievement is extraordinary.  They have induced the production of a new tooth and then transplanted it successfully into another mouth.  In the process, bone growth and normal jaw development was stimulated.

The only point that they are silent on is the underlying nerve system.  It may not be solved, but other local nerves have obviously taken up the support of bone regeneration.

There is plenty to be done, but we are still way down the road toward full dental restoration as plausible protocol and nothing could be more welcome as that is the most vulnerable to simple wear and tear as we age.

I have been posting on life extension for some time.  It is presently plausible that a lot of individuals now alive will see their one hundredth birthday.  It will be possible to be in general good health.  The challenge after establishing such protocols is to restore damaged joints and failing teeth.  Both are driven by simple mechanical wear.

Thus this is a welcome development as we enter that brave new world. 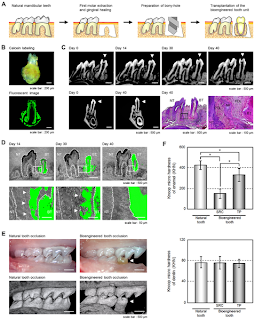 Molar teeth and jaw bone were grown from stem cells in one mouse and then transplanted to another mouse. This was a proof of concept for growing mature organs for harvest and transplant from an individuals stem cells.

Donor organ transplantation is currently an essential therapeutic approach to the replacement of a dysfunctional organ as a result of disease, injury or aging in vivo. Recent progress in the area of regenerative therapy has the potential to lead to bioengineered mature organ replacement in the future. In this proof of concept study, we here report a further development in this regard in which a bioengineered tooth unit comprising mature tooth, periodontal ligament and alveolar bone, was successfully transplanted into a properly-sized bony hole in the alveolar bone through bone integration by recipient bone remodeling in a murine transplantation model system. The bioengineered tooth unit restored enough the alveolar bone in a vertical direction into an extensive bone defect of murine lower jaw. Engrafted bioengineered tooth displayed physiological tooth functions such as mastication, periodontal ligament function for bone remodeling and responsiveness to noxious stimulations. This study thus represents a substantial advance and demonstrates the real potential for bioengineered mature organ replacement as a next generation regenerative therapy. 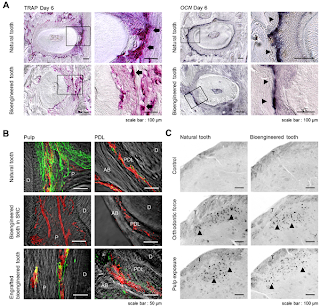 For the regeneration of ectodermal organs such as a tooth, hair follicle or salivary gland a further concept has been proposed in which a bioengineered organ is developed from bioengineered organ germ by reproducing the developmental processes that take place during organogenesis. Tooth regenerative therapy is thought to be a very useful study model for organ replacement therapies. The loss of a tooth causes fundamental problems in terms of oral functions, which are achieved in harmony with the teeth, masticatory muscles and the temporomandibular joint under the control of the central nervous system. It has been anticipated that a bioengineered tooth could restore oral and physiological tooth functions. We have previously developed a three-dimensional cell manipulation method, designated the organ germ method, for the reconstitution of bioengineered organ germ, such as a tooth or whisker follicle. This bioengineered tooth erupted with the correct structure, occluded at the lost tooth region in an adult mouse. It also showed sufficient masticatory performance, periodontal functions for bone remodeling and the proper responsiveness to noxious stimulations. This previous study thus provided a proof of concept that successful replacement of an entire and fully functioning organ could be achieved through the transplantation of bioengineered organ germ i.e. a successful organ replacement regenerative therapy. 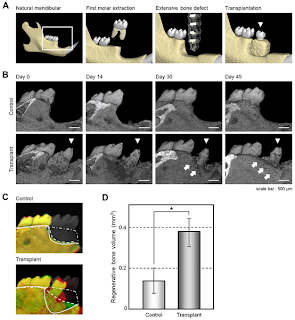 
Organ replacement regenerative therapy, but not stem cell transplantation regenerative therapy for tissue repair, holds great promise for the future replacement of a dysfunctional organ with a bioengineered organ reconstructed using three-dimensional cell manipulation in vitro. In previous reports, however, artificial organs, which were constructed with various cells and artificial materials could not restore functionality and thus are not a viable option for long-term organ replacement in vivo. Previously, it has been shown that a bioengineered organ can be grown in vivo in amphibian models in which activin-treated cell aggregates could form a secondary heart with pumping function and also regenerate eyes that were light responsive and connected with the host nervous system. Recently, we have also regenerated bioengineered organ germs, including tooth germs and whisker follicles, and successfully achieved a fully functioning tooth replacement in an adult mouse through the transplantation of a bioengineered tooth germ in the lost tooth region. It has been anticipated that replacement therapies will be developed in the future through the transplantation of a bioengineered mature organ with full functionality and long-term viability. In our present experiments, we successfully generated a size-controlled bioengineered mature tooth unit, a strategy we adopted because the growth of functional organs in vitro is not yet possible. Organs require a sufficient mass (cell number) and proper shape to function and the tooth has unique morphological features, such as the tooth crown width and length (macro-morphology), and cusp and root shape (micro-morphology). However, the technology to regulate tooth morphogenesis for whole tooth regeneration remains unexplored. We recently developed a novel organ germ method to regulate the crown width by regulating the contact area between epithelial and mesenchymal cell layers. In our previous work, we demonstrated that the length of the bioengineered tooth is equivalent to that of natural tooth after the transplantation of the bioengineered tooth germ into oral environment. In this study, the length of the bioengineered tooth unit could be controlled longitudinally, which would be provided by the limited space of the device. These findings provide the first evidence that the bioengineered tooth can be controlled in three-dimensions using a specialized device. It is also thought that bioengineered teeth could be generated with a controlled crown width through cell manipulation and tooth length by placement in a size-controlling device, which places a three-dimensional spatial limitation on size.

Not sure you need a nerve for a tooth.

But mice teeth are different from human teeth in that they are constantly growing. I am not sure if the odontoblasts and ameloblasts in humans have not alrady disappeared through apotosis. That could complicate stimulating stem cells into changing into the appropriate tooth forming precursor cells.

Also I don't see the point in transplants...just form the tooth in the socket where it is missing. Then you don't have the extra complication of transplant rejection. Or grow the tooth in a dish.