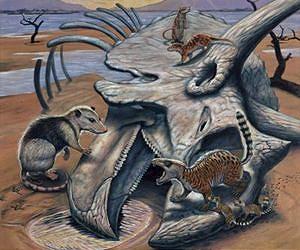 The problem with the KT boundary was the lack of dinosaur fossils immediately below the boundary itself.  It was argued quite rightly that we simply do not have any unique fossil sites just at the event horizon or close to it.  In fact our fossil record is always from discrete eras and actually very few of those.

This makes it statistically difficult to lock down specific events.  What is certain is that the Dinosaurs did not survive the KT event particularly well at all and succeeding fossil event shows their apparent disappearance as global phenomena.

I do not exclude their partial retention in limited numbers in specific locales for long periods such as Northern Australia and .

So this fossil just below the KT horizon is a welcome confirmation of the KT theory and eliminate an anomaly that was not trusted to start with.

Three small primitive mammals walk over aTriceratops skeleton, one of the last dinosaurs to exist before the mass extinction that gave way to the age of mammals. Credit: Mark Hallett

A team of scientists has discovered the youngest dinosaur preserved in the fossil record before the catastrophic meteor impact 65 million years ago. The finding indicates that dinosaurs did not go extinct prior to the impact and provides further evidence as to whether the impact was in fact the cause of their extinction.

Researchers from discovered the fossilized horn of a ceratopsian - likely a Triceratops, which are common to the area - in the Hell Creek formation in last year.

They found the fossil buried just five inches below the K-T boundary, the geological layer that marks the transition from the Cretaceous period to the Tertiary period at the time of the mass extinction that took place 65 million years ago.

Since the impact hypothesis for the demise of the dinosaurs was first proposed more than 30 years ago, many scientists have come to believe the meteor caused the mass extinction and wiped out the dinosaurs, but a sticking point has been an apparent lack of fossils buried within the 10 feet of rock below the K-T boundary. The seeming anomaly has come to be known as the "three-meter gap."

Until now, this gap has caused some paleontologists to question whether the non-avian dinosaurs of the era - which included Tyrannosaurus rex, Triceratops, Torosaurus and the duckbilled dinosaurs - gradually went extinct sometime before the meteor struck. (Avian dinosaurs survived the impact, and eventually gave rise to modern-day birds.)

"The fact that this specimen was so close to the boundary indicates that at least some dinosaurs were doing fine right up until the impact."
Posted by arclein at 12:01 AM