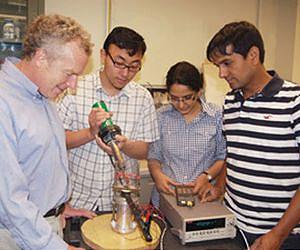 One of the unsolved problems in energy conversion is to convert low grade radiative heat into brake horsepower.  This breakthrough allows us to begin engineering plausible solutions.  We are not given the actual transition temperature, but indications are that it is well within the usual working ranges.

Now imagine a magnetic motor effect that switches on or off depending on changing temperature.  It is mind boggling to piece something together, but this should spur inventive talents everywhere.

Better designs for rotary power takeoff have enthralled garage tinkerers for decades.  Add in a few niobium magnets and we are off.  This could keep even me busy for years.

During a small-scale demonstration in the lab, University of researchers showed how their new material can spontaneously produce electricity when the temperature is raised a small amount. Pictured (from left) are aerospaceengineering and mechanics professor Richard James, Ph.D. student Yintao Song and post-doctoral researchers Kanwal Bhatti and Vijay Srivastava.

of engineering researchers in the

Researchers say the material could potentially be used to capture waste heat from a car's exhaust that would heat the material and produce electricity for charging the battery in a hybrid car. Other possible future uses include capturing rejected heat from industrial and power plants or temperature differences in the ocean to create electricity. The research team is looking into possible commercialization of the technology.

"This research is very promising because it presents an entirely new method for energy conversion that's never been done before," said University of Minnesota aerospace engineering and mechanics professor Richard James, who led the research team."It's also the ultimate 'green' way to create electricity because it uses waste heat to create electricity with no carbon dioxide."

The alloy Ni45Co5Mn40Sn10 achieves multiferroism by undergoing a highly reversible phase transformation where one solid turns into another solid. During this phase transformation the alloy undergoes changes in its magnetic properties that are exploited in the energy conversion device.

During a small-scale demonstration in a lab, the new material created by the researchers begins as a non-magnetic material, then suddenly becomes strongly magnetic when the temperature is raised a small amount. When this happens, the material absorbs heat and spontaneously produces electricity in a surrounding coil. Some of this heat energy is lost in a process called hysteresis.

A critical discovery of the team is a systematic way to minimize hysteresis in phase transformations. The team's research was recently published in the first issue of the new scientific journal Advanced Energy Materials.

In addition to Professor James, other members of the research team include aerospace engineering and mechanics post-doctoral researchers Vijay Srivastava and Kanwal Bhatti, and Ph.D. student Yintao Song. The team is also working with chemical engineering and materials science professor Christopher Leighton to create a thin film of the material that could be used, for example, to convert some of the waste heat from computers into electricity.

"This research crosses all boundaries of science and engineering," James said. "It includes engineering, physics, materials, chemistry, mathematics and more. It has required all of us within the university's and Engineering to work together to think in new ways." 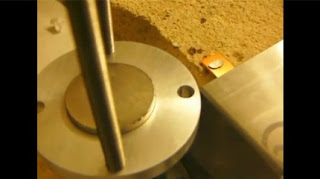 The heat given off by electronics, automobile engines, factories and other sources is a potentially huge source of energy, and various technologies are being developed in order to capture that heat, and then convert it into electricity. Thanks to an alloy that was recently developed at the , however, a step in that process could be saved - the new material is able to convert heat directly into electricity.

The multiferroic alloy, with the catchy name Ni45Co5Mn40Sn10, was created by combining its various elements at the atomic level. Multiferroic materials are known for having unique elastic, magnetic and electric properties, and in the case of this alloy, that takes a form of an usual phase change. When heated, the non-magnetic solid material suddenly becomes a strongly magnetic solid.

In a lab test, upon becoming magnetic, the material absorbed heat in its environment and proceeded to produce electricity in an attached coil. Although some of the heat energy is lost in a process known as hysteresis, the U Minnesotaresearchers have developed a method of minimizing that energy loss.

"This research is very promising because it presents an entirely new method for energy conversion that's never been done before," said aerospace engineering and mechanics professor Richard James, who led the research team. "It's also the ultimate 'green' way to create electricity because it uses waste heat to create electricity with no carbon dioxide."
The research was recently published in the journal Advanced Energy Materials.

We demonstrate a new method for the direct conversion of heat to electricity using the recently discovered multiferroic alloy, Ni45Co5Mn40Sn101. This alloy undergoes a low hysteresis, reversible martensitic phase transformation from a nonmagnetic martensite phase to a strongly ferromagnetic austenite phase upon heating. When biased by a suitably placed permanent magnet, heating through the phase transformation causes a sudden increase of the magnetic moment to a large value. As a consequence of Faraday’s law of induction, this drives a current in a surrounding circuit. Theory predicts that under optimal conditions the performance compares favorably with the best thermoelectrics. Because of the low hysteresis of the alloy, a promising area of application of this concept appears to be energy conversion at small ΔT, suggesting a possible route to the conversion of the vast amounts of energy stored on earth at small temperature difference. We postulate other new methods for the direct conversion of heat to electricity suggested by the underlying theory