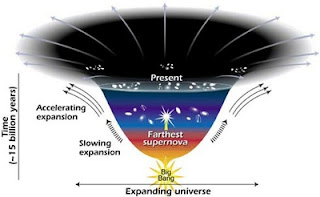 The debate continues in the efforts used to come to grips with the apparent missing mass in the universe.

I suspect that the dark energy problem goes away rather easily if that mass consists of low energy neutrinos which do not provide gravitational potential.  My own theory of cloud cosmology posits such a regime modeled with my nth ordered metrics hinted at in my paper introducing generalized cyclic functions.

We presently can only see high energy neutrinos and do not predict any other type.

The first problem with measuring neutrino mass is that it lacks a net gravitational potential.  Thus any obvious mechanism with objects providing any potential is in trouble.  It simply cannot be expected to react.  It really runs dark.

Only cat burglars can match the stealth of dark energy, credited with speeding up the universe's expansion over time, but now its fingerprints have been glimpsed in the universe's oldest radiation.

The strongest evidence for dark energy comes from supernovae, which suggest the universe is expanding faster now than in the past. But the force should also change the extent to which the cosmic microwave background(CMB), relic radiation from the big bang, is warped, or "lensed", by the gravity from distant galaxies and dark matter.

That's because the accelerating expansion of the universe should prevent the growth of very massive structures. "In a universe with no dark energy, massive objects would just keep growing, which results in more gravitational lensing," says Sudeep Das of the of , .

Gravitational lensing is tough to pick out in the ancient radiation because the CMB contains random fluctuations. But Das and his colleagues have used a new type of mathematical analysis to reveal for the first time the distinctive distortions from gravitational lensing in the CMB.

The measurement, while not breaking any records for accuracy, bolsters the case for dark energy. "Because of dark energy's importance to both the future evolution of the universe and the foundation of physics, it is extremely important to find a variety of evidence that confirms its existence," says Stephen Boughn of Haverford College in Pennsylvania, who was not involved in the work.

Das's observations of the CMB were made with the Atacama Cosmology Telescope in Chile, but 's Planck satellite will soon return even more detailed measurements.

Applying the same mathematical technique to this Planck data could help astronomers better understand other important problems in cosmology. One outstanding question regards the mass of the neutrino, an elusive particle with a mass so small that it has yet to register in any measurement.

Nevertheless, neutrinos ought to interact with the universe's mass on the largest scales: as these particles careen through the universe at near light-speed, they interact with ordinary matter and tend to smooth out variations in density. If the neutrinos are more massive, this effect is stronger, but restricted to shorter distances. By contrast, near-massless neutrinos aren't so forceful, but would show their effects over longer distances.

Since gravitational lensing of the CMB gives a measure of matter's tendency to clump together over a large range of distances, it can hint at the strength and scale of the smoothing. And this, in turn, will allow cosmologists to put a limit on the maximum possible mass of the neutrino.

Last year a team at University College London used the clustering of galaxies as a proxy for the clumping of matter, and their result put that mass at under 0.28 electronvolts, less than one-millionth the mass of an electron.

Gravitational lensing in the CMB could pin down the sum of the masses of the three types of neutrino with even greater accuracy.