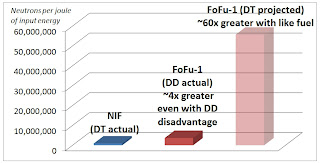 This release from Focus Fusion quite rightly observes that in the race to produce net fusion energy, that Focus Fusion is well ahead of the two massive projects underway that are costing billions of dollars.  In fact the small size of the device allows for swifter upgrades as work progresses.  We are seeing that now as they are now putting in far more robust electrodes.

It also appears to respond well to increases in scale and taking it up through to actual power production may turn out surprisingly easy.  Just once we could use easy.  Of course the big test will be running it all with barium.  I suspect that the early tests were just too cautious in terms of actual sizing of the equipment.  This happens to be a much too common error.  It is vastly more difficult to achieve results if you are simply too small.

The present set up is been made more robust and we may well have excellent results coming over the next few months.

As I have posted in the past, the importance of this particular design is that it will be compact and suitable for a spacecraft using magnetic field exclusion technology or even a battery of plasma engines if we have to.

In the race for fusion energy, lightning thunders over lasers

, – Scientists and officials from the National Ignition Facility (NIF) were rightfully proud of their fusion research progress unveiled last month at a major physics conference in . But by one key measure, the $3 billion-plus NIF project was upstaged by a start-up whose fusion device has advanced on a budget of less than $3 million.  This measure—which reflects the amount of fusion energy a device puts out relative to the energy scientists put in—is essential in gauging the race for the ultimate energy prize: A fusion machine that can produce more energy than it uses, with the excess clean power flowing to the grid.  And by this measure, scientists from Lawrenceville Plasma Physics (LPP) are at least four and perhaps as much as sixty times ahead of NIF as they squeeze thunderbolts of electricity through a tiny fusion reactor that would be lost amidst NIF’s football-stadium-sized arrays of lasers.
In presentations at the gathering of over one thousand scientists—the 38th International Conference on Plasma Science—the NIF researchers reported producing an impressive 400 trillion neutrons from the fusion reactions in their best experiments.  But NIF uses a lot of energy to accomplish this feat, some 422 million joules of electric energy.  To understand that energy, imagine the energy of motion of 400 one-ton vehicles all moving at 100 miles per hour.  Instead of actual vehicles colliding, picture that energy used to generate laser light and focus it on a pellet of frozen deuterium and tritium fusion fuel. (Deuterium and tritium, or DT for short, are isotopes of hydrogen.) That’s the energy NIF uses to generate its neutrons.

At LPP’s much more modest research facility, fusion is generated by a device called a dense plasma focus.  LPP’s Focus Fusion-1 (“FoFu-1”) device uses a much smaller amount of electric energy, and instead of powering lasers, this electricity flows directly to electrodes in a central vacuum chamber where it kinks and twists itself to confine a small ball of plasma.  In other words, sitting in a space the size of a small garage, FoFu-1 unleashes a bolt of lightning that lassos itself into a knot, and LPP’s patented approach appears to be much more efficient in generating those all-important fusion reactions.  FoFu-1’s best experiments required less than a tenth of one-percent the energy NIF used—thirty-five thousand joules instead of over four hundred million—but still generated 130 billion fusion neutrons.  How can we compare these large numbers?  Ultimately, any fusion device that produces net energy has to produce more fusion energy than is fed in, so fusion neutrons per joule is a good overall measure of success. NIF produces just a bit less than a million neutrons per joule of energy. FoFu-1 has produced 3.7 million neutrons per joule, almost 4 times better than NIF.

A truly fair comparison is even more favorable to lightning over lasers, since FoFu-1 has the disadvantage of using pure deuterium fuel (with the reaction represented as DD), not the deuterium mixed with tritium (DT) used by NIF. Since DT is much easier to burn as a fusion fuel, this gives NIF a major advantage.  If FoFu-1 achieved the same conditions with DT fuel as it had with DD, it would have achieved results some 60 times better than NIF.  But LPP has even bigger plans—Instead of NIF’s radioactive tritium, the company will instead be transitioning to the fuel of regular hydrogen and the common element boron, a reaction which in itself doesn’t make any neutrons at all.  This gives LPP’s technology another huge advantage, because it completely avoids the generation of any nuclear waste, while allowing for cheap conversion of fusion energy directly into electricity.

LPP scientists Eric Lerner and Murali Subramanian did not hear of any neutron per joule fusion yields better than those they presented from FoFu-1’s during the conference, which are further supported by comparable results from other dense plasma focus experiments over the past decade. NIF researchers hope to improve enough to reach ignition in a year, but LPP expects to substantially better its own results next month as major upgrades to FoFu-1 are completed.  Yet, to judge from the work of most scientists at the conference, an observer might think that there were only two possibilities for fusion: NIF and the equally enormous ITER, a 100-foot tall “plasma donut” that may finish construction in by 2025.

Even with superior results, LPP’s FoFu-1 must improve its performance by orders of magnitude to demonstrate the feasibility of net energy.  In addition, if feasibility is proven, major engineering efforts will also be needed to build a working prototype generator. All this takes funding. But LPP hopes that decision makers will look beyond just two huge approaches, and instead expand both private and governmental fusion investment to include far more ideas, including a little lightning in a bottle.
Posted by arclein at 12:01 AM