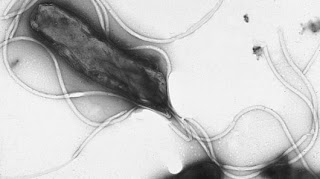 It should be obvious from this that we need to develop a protocol the injects a full spectrum of microbes into the digestive tract early on and whenever we complete a antibiotic program as well.  It could easily be prepared in a yogurt base which presently delivers beneficial bacteria.

This also reminds me of the use of parasitic worms to quell Chron’s disease.  I suspect that all gastrointestinal issues are resolved by such aggressive biological protocols.  The only difficulty comes from our own preconceptions.

In practice, the gastrointestinal tract does all the heavy lifting in terms of managing our contact with the environment, so it is not unimaginable that such intestinal activity is the primary cause of asthma which on the face of it is a lung issue.

It's widely recognized that asthma rates have increased significantly since the 1960's and continue to rise. With increases in asthma and other allergic diseases centered on industrialized nations, a recent hypothesis suggested that the disappearance of specific microorganisms that populate the human body due to modern hygiene practices might be to blame. Now researchers claim they have confirmed this hypothesis by proving that a certain gastric bacterium provides reliable protection against allergy-induced asthma.

The hygiene hypothesis states that modern hygiene practices and overuse of antibiotics have led to a lack of early childhood exposure to infectious agents, symbiotic microorganisms and parasites, which has suppressed the natural development of the body's immune system. Scientists from the University of Zurich and the University Medical Center of the Johannes Gutenberg University Mainz are now saying that the increase in asthma could be put down to the specific disappearance of the gastric bacterium Helicobacter pylori (H. pylori) from Western societies.

H. pylori is a bacterium that is resistant to gastric acid and it is estimated that it could currently infect around half of the world's population. While it can cause gastritis, gastric and duodenal ulcers, and stomach cancer under certain conditions, over 80 percent of individuals infected with the bacterium are asymptomatic. However, even if the patient doesn't show any symptoms, H. pylori is often killed off with antibiotics as a precaution.

For their study, the researchers infected mice with H. pylori bacteria at different stages of their development. They found that mice that were infected at just a few days old developed immunological tolerance to the bacterium and reacted insignificantly or not at all to strong, asthma-inducing allergens. Mice that were not infected until they had reached adulthood, however, had a much weaker defense.

"Early infection impairs the maturation of the dendritic cells and triggers the accumulation of regulatory T-cells that are crucial for the suppression of asthma," explains Anne Müller, a professor of molecular cancer research at the .

The researchers also found that if the regulatory T-cells were transferred from infected mice to uninfected mice, they too enjoyed effective protection against allergy-induced asthma. Additionally, mice that had been infected early lost their resistance to asthma-inducing allergens if H. pylori was killed off in them using antibiotics.

According to lung and allergy specialist Christian Taube, a senior physician at III. Medical Clinic of the Johannes Gutenberg University Mainz, the new results that are published in the Journal of Clinical Investigation confirm the hypothesis that the increase in allergic asthma in industrial nations is linked to the widespread use of antibiotics and the subsequent disappearance of micro-organisms that permanently populate the human body.

"The study of these fundamental mechanisms is extremely important for us to understand asthma and be able to develop preventative and therapeutic strategies later on," he said.
Posted by arclein at 12:01 AM