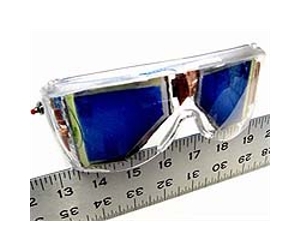 Lens technology certainly has never stood still and we have another great example here.

Having sunglasses been continually modified by the ambient light is plausibly possible with this system.  That it is able to perform over a wide range is also implied.

For our next trick it would be useful to contact the radiation from a broader spectrum allowing our eyes to see into a wider spectral range.  This is now becoming a possibility.

Recall ET with his huge artificial eyes?  Are we far awy?

"The lifetime of sunglasses is usually very short," says Sotzing, who points out that people often misplace them. So by making the manufacturing less expensive, he says, commercial retailers will be able to produce more of them.

University of Connecticut scientist has perfected a method for creating quick-changing, variable colors in films and displays, such as sunglasses, that could lead to the next hot fashion accessory.

The new technology also has captured the interest of the military as a way to assist soldiers who need to be able to see clearly in rapidly changing environments.

The process for creating the lenses, for which a patent is pending, also is less expensive and less wasteful to manufacturers than previous methods. The findings were published July 7 in the Journal of Materials Chemistry.

"This is the next big thing for transition lenses," says Greg Sotzing, a professor of chemistry in UConn's and Sciences and a member of UConn's Polymer Program.

The typical material behind a transition lens is what's called a photochromic film, or a sheet of polymers that change color when light hits them. Sotzing's new technology does things slightly differently - his electrochromic lenses are controlled by an electric current passing through them when triggered by a stimulus, such as light.

"They're like double pane windows with a gap between them," explains Sotzing. He and his colleagues squirt a mixture of polymers - or as he calls it, "goop" - in between the layers, creating the lens as it hardens. The mixture of polymers used in this lens, says Sotzing, creates less waste and is less expensive to produce than previous mixtures.

"The lifetime of sunglasses is usually very short," says Sotzing, who points out that people often misplace them. So by making the manufacturing less expensive, he says, commercial retailers will be able to produce more of them.

Another benefit of this material is that it can change colors as quickly as electricity passes through it - which is virtually instantaneously. This process could be very useful for the military, Sotzing says. For example, if a person emerges from a dark passageway and into the desert, a lens that would alter its color instantly to complement the surroundings could mean life or death for some soldiers.

"Right now, soldiers have to physically change the lenses in their goggles," Sotzing says. "This will eliminate that need." Sotzing will begin a one-year sabbatical at the in August, where he hopes to develop some of these ideas.

In November 2010, partially based on work supported by the Center for Science and Technology Commercialization's Prototype Fund, the UConn R and D Corporation started a company, called Alphachromics Inc., with Sotzing and colleague Michael Invernale, now a post-doctoral researcher at MIT, as founders. The university has a patent pending for this new technology, which is currently under option to the company. Alphachromics is also testing applications of these polymer systems for energy-saving windows and custom fabrics.

Currently in talks with sunglass manufacturers, Sotzing says that the world of could have a market for this technology. He describes applications he calls "freaky," including colors that move back and forth across the glasses, evoking styles like those sported by Lady Gaga.

But Sotzing stresses that the best thing about this technology is the creation of business in . Although the glasses won't be made here, the technology will be licensed out of the state and, he hopes, Alphachromics will continue to expand.

"We don't make the sunglasses," he says. "We make the formulation of what goes inside them."

Sotzing's collaborators on the paper are Invernale and Ph.D. students Yujie Ding, Donna Mamangun and Amrita Kumar. The research was funded by the tech/textile company ITP-GmbH.