Elixir of Life on Easter Island 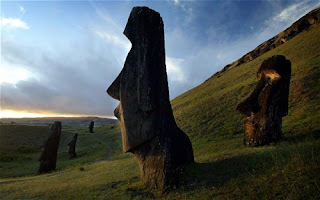 Whatever this is, it can not be unique to .  Most important is that it reverses the progress of Progeria which is a horrible disease in which a person rapidly ages and soon dies from age related diseases.

This is the first hope even offered that it may be at least countered, allowing the victim to lead a norm al life. This is obviously no cure.

It is also the first protocol that could be applied to normal human beings that promises to leave affected cells in a better state.  This is obviously important in terms of life extension.  Repairing telomeres is unlikely to also eliminate damage while something like this could well do so.

For Progeria sufferers, it is truly the elixir of life and it remains to be seen if this holds true for the rest of us.

Elixir of life discovered on

A drug has been discovered which scientists believe can reverse the effects of premature ageing and could extend human life by more than a decade.

Easter Island is one of the most remote places on Earth and found 2,000 miles off the coast of Chile

Rapamycin, which has been nicknamed the “forever young” drug, was created from a chemical found in the soil on Easter Island, one of the most remote places on Earth and 2,000 miles off the coast of .

It was used in experiments on children suffering from Hutchinson-Gilford Progeria Syndrome (HGPS), a rare genetic condition in which ageing is hyper-accelerated and sufferers die of “old age” at around 12 years.

HGPS causes a dangerous process whereby a protein called progerin builds up in every cell of the body, causing them to age prematurely.

Rapamycin cleaned the cells of progerin, which swept away the defects and left healthy cells.

Researchers in the United States, who include Francis Collins, a pioneering genetic scientist and collaborators from Harvard Medical School, are expected to start looking at whether the drug could be used more widely, after similarities between HGPS and the normal ageing process were uncovered.