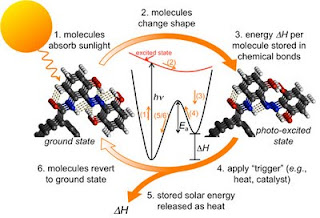 Recall that it is still early days with all of this.  Yet what is presented here is actually quite useful.  How about a siding that stores incoming solar energy allowing the building to remain cool and that then releases the same heat during the early morning hours to warm the building?  It would certainly be a great option for the desert.

The capabilities promised by nanotech continue to expand and confound the imagination.  It may not be obvious, but we are in one of the great bursts of knowledge expansion ever in human history and this epoch will be known for just this.

So enjoy and do not allow yourself to think that anything is ever good enough.

Modified carbon nanotubes can store solar energy indefinitely, then be recharged by exposure to the sun.

Storing the sun’s heat in chemical form — rather than converting it to electricity or storing the heat itself in a heavily insulated container — has significant advantages, since in principle the chemical material can be stored for long periods of time without losing any of its stored energy. The problem with that approach has been that until now the chemicals needed to perform this conversion and storage either degraded within a few cycles, or included the element ruthenium, which is rare and expensive.

Solar thermal fuels, which reversibly store solar energy in molecular bonds, are a tantalizing prospect for clean, renewable, and transportable energy conversion/storage. However, large-scale adoption requires enhanced energy storage capacity and thermal stability. Here we present a novel solar thermal fuel, composed of azobenzene-functionalized carbon nanotubes, with the volumetric energy density of Li-ion batteries. Our work also demonstrates that the inclusion of nanoscale templates is an effective strategy for design of highly cyclable, thermally stable, and energy-dense solar thermal fuels.
Using carbon nanotubes the new chemical system is less expensive than the earlier ruthenium-containing compound, but it also is vastly more efficient at storing energy in a given amount of space — about 10,000 times higher in volumetric energy density, Kolpak says — making its energy density comparable to lithium-ion batteries. By using nanofabrication methods, “you can control [the molecules’] interactions, increasing the amount of energy they can store and the length of time for which they can store it — and most importantly, you can control both independently,” she says.


Thermo-chemical storage of solar energy uses a molecule whose structure changes when exposed to sunlight, and can remain stable in that form indefinitely. Then, when nudged by a stimulus — a catalyst, a small temperature change, a flash of light — it can quickly snap back to its other form, releasing its stored energy in a burst of heat. Grossman describes it as creating a rechargeable heat battery with a long shelf life, like a conventional battery.


One of the great advantages of the new approach to harnessing solar energy, Grossman says, is that it simplifies the process by combining energy harvesting and storage into a single step. “You’ve got a material that both converts and stores energy,” he says. “It’s robust, it doesn’t degrade, and it’s cheap.” One limitation, however, is that while this process is useful for heating applications, to produce electricity would require another conversion step, using thermoelectric devices or producing steam to run a generator.


While the new work shows the energy-storage capability of a specific type of molecule — azobenzene-functionalized carbon nanotubes — Grossman says the way the material was designed involves “a general concept that can be applied to many new materials.” Many of these have already been synthesized by other researchers for different applications, and would simply need to have their properties fine-tuned for solar thermal storage.


The key to controlling solar thermal storage is an energy barrier separating the two stable states the molecule can adopt; the detailed understanding of that barrier was central to Grossman’s earlier research on fulvalene dirunthenium, accounting for its long-term stability. Too low a barrier, and the molecule would return too easily to its “uncharged” state, failing to store energy for long periods; if the barrier were too high, it would not be able to easily release its energy when needed. “The barrier has to be optimized,” Grossman says.
Posted by arclein at 12:01 AM