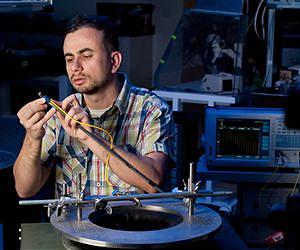 This is a marvelous new sound detection device and we can expect plenty of surprises in terms of unexpected new knowledge.  The first big challenge will be to assemble a library of identified biological sounds.  Such a library can provide a natural sieve allowing us to run down anomalies.

In time we may even produce a complete global library of all marine life with this tool.

In short, this is an important tool that will also find its way into the tool box of the fishing industry.

Onur Kilic, postdoctoral fellow at the Center for Nanotechnology, prepares to test a microphone. Photos by .

For most people, listening to the ocean means contemplating the soothing sound of waves breaking gently on a sandy beach.

But for researchers studying everything from whale migration to fisheries populations, and from underwater mapping to guiding robots trying to repair leaking undersea oil wells, listening to the ocean from the other side - underwater - can reveal volumes of valuable data.

Stanford researchers have developed a highly sensitive underwater microphone that can capture the whole range of ocean sounds, from the equivalent of a soft whisper in a library to an explosion of a ton of TNT just 60 feet away - a range of approximately 160 decibels - and do so accurately at any depth, no matter how crushing the pressure.

It also can hear sound frequencies across a span of 17 octaves, spanning pitches far higher than the whine of a mosquito and far lower than a rumbling foghorn.

Existing underwater microphones - called hydrophones - have much more limited ranges of sensitivity and do not perform well at depth, where the ambient pressure can be extremely large, making it difficult to detect faint sounds.

Sonar - using sound to locate and map - is critical to underwater communication and exploration, because radio signals can travel only a centimeter or two before they dissipate in seawater and light can't penetrate the depths below about 100 meters.

In approaching the challenge of designing the new hydrophone, the researchers first examined some existing listening devices that work well underwater - the ears of marine mammals, particularly orcas.

"Orcas had millions of years to optimize their sonar and it shows," said Onur Kilic, a postdoctoral researcher in electrical engineering. "They can sense sounds over a tremendous range of frequencies and that was what we wanted to do."

Kilic is the lead author of a paper about the research published in the Journal of the Acoustic Society of earlier this year.

What orcas, humans and other creatures perceive as sound consists of small fluctuations in pressure. When someone beats a drum, it is the flexing of the membrane on the drum, first deflecting then rebounding, which causes the sound waves that we can hear. A microphone detects those sounds by means of a membrane or diaphragm inside it that vibrates in response to the pressure waves of sound that reach it.

Air pressure on the surface of the Earth is fairly constant, so in designing a microphone for use on land, engineers don't have to worry about large variations in air pressure.

But in the ocean, for every 10 meters you descend below the surface, the water pressure around you increases by the equivalent of 1 atmosphere - the air pressure we feel at the surface.

The deepest point on the planet, the Challenger Deep in the Mariana Trench in the South Pacific, lies approximately 11,000 meters (almost 7 miles) below sea level. At that depth, the pressure is approximately 1,100 times the air pressure at Earth's surface.

"The only way to make a sensor that can detect very small fluctuations in pressure against such immense range in background pressure is to fill the sensor with water," Kilic said.

Letting water flow into the microphone keeps the water pressure on each side of the membrane equal, no matter how deep.

Kilic and his colleagues fabricated a silicon chip with a thin membrane about 500 nanometers thick - about 25 times thinner than common plastic wrap - and drilled a grid of tiny nano-holes in it, to allow water to pass in and out.

But unlike air, water is virtually incompressible, so having water on each side of the diaphragm damped the amount that the diaphragm could move in response to any given sound waves that struck it.

"The kind of displacements you get of the diaphragm for the quietest sounds in the ocean is on the order of a hundred-thousandth of a nanometer," Kilic said. "That is ten thousand times smaller than the diameter of an atom."

One of the best ways to detect and accurately measure movements that small is by using lasers and mirrors, creating a sort of tiny light show inside the microphone.

Normally a diaphragm so thin would be transparent, allowing the laser's light to escape. But the researchers knew that if the diameters of the holes that allowed water to pass through the diaphragm were close to the wavelength of the light from the laser, the holes would interfere with light trying to pass through the membrane. Instead of letting it pass, the holes would reflect the light back toward the tip of the fiber optic cable, effectively turning the diaphragm into a mirror even as it still allowed water to pass.

"It is counterintuitive, because we don't see this happen at our scale," Kilic said. "But at very small scales, with the right size holes drilled through the membrane, it works."

When the diaphragm is deformed ever so slightly by a sound wave, the intensity of the light reflected back into the cable is altered, which is measured with an optical detector.

Now the scientists had a hydrophone that would function at any depth and could detect and measure sound with extreme accuracy. But to be able to capture the full range of volumes they were after - a spread of 160 decibels - one diaphragm wasn't enough. So they used three.

By giving each one a different diameter, they were able to "tune" each diaphragm to maximize its sensitivity to a different part of the range of volumes they wanted to detect.

One was tuned to measure quiet sounds on the library-whisper end of the spectrum, one was attuned more to the loud, TNT explosion end of the range, and the third was tuned to the mid-range volumes.

The diaphragms are so tiny - the largest is three-tenths of a millimeter in diameter - Kilic could fit all three into a space far smaller than the wavelengths of the sound they sought to detect. That was critical, because it allowed the diaphragms to effectively function as one.

"Since they all measure the exact same signal - just with different degrees of responsiveness - they work like a single sensor," Kilic said.

"It is a very high dynamic range microphone, able to sense everything from the weakest sounds to those 100 million times stronger."

All three diaphragms - along with a separate fiber optic cable for each, plus another used for calibration - fit easily into the housing of the microphone, which is barely larger than a pea.

But the little pea-sized microphone could have a big impact on a wide range of research, from standard applications such as surveying the ocean floor to more exotic endeavors in particle physics that use acoustic detectors to monitor ultra-high-energy neutrinos - almost weightless particles emitted by the sun - plunging into the ocean.

The research was funded by Litton Systems Inc., a wholly owned subsidiary of Northrop-Grumman Corp.