One should not take too much from this shift portrayal as it certainly allows the warming period ending in 1998 to provide full weight.   The next will show a decline and the next is quite likely to show a much more serious decline unless we get another burst of warming conditions.

The fact on the ground has been that it is somewhat warmer for around thirty years and that the preceding thirty years 1950 to 1980 was much cooler.  Before that the period 1920 to 1950 was warmer.

Human beings can remember warm decades and cold decades.  The last decade was warm but less warm than the preceding decade.  We have now kicked of this decade with a cold year and three more of those with average years in between and we will have a cold decade.

Otherwise these are neat maps and well worth the study.

The National Oceanic and Atmospheric Administration (NOAA) just updated its Climate Normals for the . Per agreement of the World Meteorological Organization, "normals" are calculated per decade, rather than per year. NOAA's latest update is crunched from weather data compiled from 1981 to 2010.

The new annual normal temperatures for the strongly reflect a warming world: 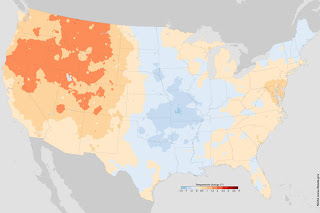 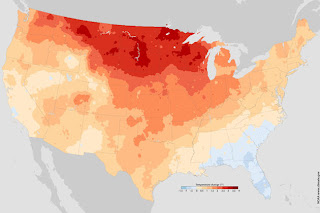 On average, the contiguous experienced the lowest temperatures on January nights and the highest temperatures on July days.
Both January minimum temperatures and July maximum temperatures changed in the past three decades -- though not equally.
Parts of the Great Plains, the , and the Northeast experienced slightly cooler July maximums from 1981-2010 compared to 1971-2000 (top map).
Far more striking are the January minimums (bottom map). Nighttime January temps were higher everywhere except the Southeast. Warmer nights were most pronounced in the northern plains and northern .
In some places the new normal is several degrees warmer than the old normal.
On a state-by-state basis, the annual average minimum (left) and maximum (right) temperatures across the are warmer in the 1981-2010 Climate Normals than in the 1971-2000 version.

As you can see in the maps above, based on average year-round temperatures, every state experienced warmer temperatures in 1981-2010 compared to 1971-2000.
A few pros and cons of a warming :
Fire season is now longer due to warmer nights.
Pollination patterns are changing, with flowering plants blooming an average of one day earliereach decade.
Warmer nights and later onset of freezing days also mean plants are shifting farther north.
Warmer temperatures pose hazards to plants by enabling pests (pine bark beetle and wooly adelgid) to thrive in places where cold winters previously froze them.