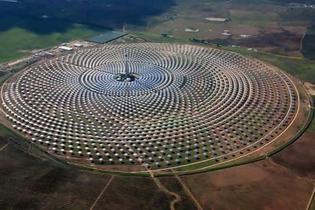 This is an update on the unusual solar collection system been pioneered in .  It produces nearly three times the output of a comparable photovoltaic system.  Thus for solar driven systems, it must be the front runner.  In the end, land area covered does matter sooner or later.

It also matters if you can store the energy to use on demand and this solves the problem at least part way.  Most other competing system are generally unable to address either issue properly.

This should be a good system to use in the in particular.

While Americans celebrated history on the Fourth of July yesterday, a company in celebrated an historic moment for the solar industry: Torresol's 19.9 megawatt (MW) concentrating solar power plant became the first ever to generate uninterrupted electricity for 24 hours straight.

The plant uses a design which features a field of 2,650 mirrors that concentrate sunlight onto a boiler in a central receiver tower. The plant also utilizes molten salt as a heat transfer fluid that allows it to generate electricity when there's no sunlight. Recharge News reported on the milestone:

After commissioning in May, the plant was finally ready to operate at full-blast in late June and benefited from a particularly sunny stretch of weather, according to Diego Ramirez, director of production at Torresol. "The high performance of the installations coincided with several days of excellent solar radiation, which made it possible for the hot-salt storage tank to reach full capacity," Ramirez explains.

Torresol says that the plant will provide electricity for about 20 hours each day on average, with numerous days in the summer seeing 24 hours of supply. How does that compare with a similar-sized photovoltaic plant? The 21.2 MW Solarpark Calaveron in generates about 40 gigawatt hours (GWh) a year. This smaller 19.9 MW power tower plant will generate about 110 GWh per year.

Yesterday's news is a big milestone for technology, which is still very nascent compared to the more mature parabolic troughs. There are only a few operating commercial-scale plants around the world, and Torresol's is the only one with molten salt storage.

Stephen Lacey is a reporter with Climate Progress covering clean energy issues. He formerly worked as a producer/editor at RenewableEnergyWorld.com.

What happens on runs of cloudy days?