I think that we can be quite optimistic about this countries future.  They are properly in the orbit of and do have excellent oil prospects as well.  Besides, the land is fertile and productive.

The is another matter and seems embroiled in Islamic jihads from our rather distant perspective and may even break up some more. War does that you know.

Otherwise, refugees from the North have a place to escape to in the now.

I do not expect the warfare in the North to end yet but this is actually a major step to settling the situation.

In the meantime the explosion of economic growth in and surrounds will drive change in this new nation and it may well be a case of great timing. 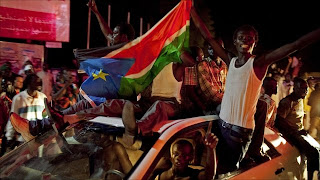 The BBC's Will Ross describes the celebrations in the capital Juba

South Sudan has become the world's newest nation, the climax of a process made possible by the 2005 peace deal that ended a long and bloody civil war.

The south's independence follows decades of conflict with the north in which some 1.5 million people died.

Celebrations in began at midnight (2100 GMT). A countdown clock in the city centre reached zero and the new national anthem was played on television.

South Sudan became the 193rd country recognised by the UN and the 54th UN member state in .

The BBC's Will Ross in says the new country's problems have been put aside for the night amid an air of great jubilation.

People were in the streets, cheering, waving flags, banging drums and chanting the name of President Salva Kiir Mayardit, he adds.

A formal independence ceremony is due to be held later on Saturday.

The Speaker of the South Sudan Legislative Assembly, James Wani Igga, is expected to read out the Proclamation of the Independence of South Sudan at 1145 (0845 GMT). Minutes later 's national flag will be lowered and the new flag of will be raised.

In addition to Mr Bashir and Mr Ban, attendees will include former Secretary of State Colin Powell, the permanent representative to the UN, Susan Rice, and the head of the military's Command, Gen Carter Ham.

Under the Comprehensive Peace Agreement, a referendum was held on independence, which was favoured by more than 99% of voters.

The new country is rich in oil, but one of the least developed countries in the world, where one in seven children dies before the age of five.

Unresolved disputes between the north and south, particularly over the new border, have also raised the possibility of renewed conflict.

On Friday, Sudan's Minister of Presidential Affairs, Bakri Hassan Saleh, announced that it recognised "the Republic of South Sudan as an independent state, according to the borders existing on 1 January 1956", when Sudan gained independence from Britain.

President Bashir, who agreed the 2005 peace deal with the Sudan People's Liberation Army (SPLA), stressed his country's "readiness to work with our southern brothers and help them set up their state so that, God willing, this state will be stable and develop".

"The co-operation between us will be excellent, particularly when it comes to marking and preserving the border so there is a movement of citizens and goods via this border," he told journalists in .

Fears of fresh conflict resurfaced after recent fighting in two border areas, Abyei and , which forced some 170,000 people from their homes.
But separate deals - and the withdrawal of rival forces from the border - have calmed tensions.
The UN Security Council has passed a resolution approving a new 7,000-strong peacekeeping force for South Sudan - but this is basically a rebranding of the force which was already in Sudan, mostly in the south.

has said its mandate would not be renewed, leading the to argue that the 1,000 UN troops should be allowed to remain in . The 1,000 troops in the disputed town of are to be replaced by 4,200 Ethiopian soldiers.

Our correspondent says keeping both the north and the south stable long after the celebratory parties have ended will be a mighty challenge.
lick to play
All you need to know about 's independence

The two sides must still decide on issues such as drawing up the new border and how to divide 's debts and oil wealth.

Analysts say the priority for will be to negotiate a favourable deal on oil revenue, as most oilfields lie in the south. At present, the revenues are being shared equally.

Khartoum has some leverage, as most of the oil pipelines flow north to on the .

Citizenship is also a key issue which has not yet been decided.

A new law passed by the National Assembly in has withdrawn Sudanese citizenship from all southerners.

The UN refugee agency (UNCHR), has urged both governments to prevent statelessness.
Posted by arclein at 12:01 AM