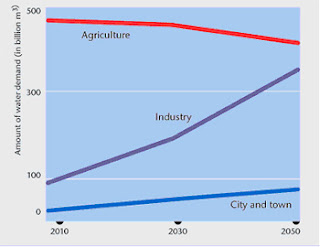 The also faces the loss of groundwater irrigation throughout the .  This will roll out over the next several decades if it take even that long.

The only good thing is that the loss is not abrupt and folks will have time to adjust.  Yet there is a real loss of production that will need to be replaced.

Hopefully we can fabricate the machine to make all this irrelevant.

We still have to do better.  Neither irrigation scheme lasted a long time in terms of the logic of agriculture.  The result is an expensive retreat.

(NaturalNews) As the world's population increases, so too does its need for food and water - the two resources which are absolutely necessary to sustain life. And as it happens, one is needed to grow the other, so it should alarm you to know that the country with the largest population - China - is is running out of water, according to some experts, which will dramatically affect its ability to feed its 1.3 billion people.


The Asian giant has been warned by one of its own groundwater experts to either cut its food production or else face "dire" waterlevels, especially in the dry northwest plains. If not, aquifers will sink to "dire" levels not seen in 30 years.


"The government must adopt a new policy to reduce water consumption," said Zheng Chunmiao, director of the Water Research Centre at , in an interview with 's Guardian newspaper.

"The main thing is to reduce demand. We have relied too much on engineering projects, but the government realizes this is not a long-term solution," he added.


But how does a country the size of reduce demand, especially during a period of rapid economic growth when the country is modernizing at a pace never seen before? Unless you physically eliminate the number of mouths to feed, can't credibly "reduce demand."


"The water situation in the plain does not allow much longer for irrigation," he added. "We need to reduce food production even though it is politically difficult. It would be much more economical to import."


That's not a popular prospect for a nation struggling to emerge from centuries of second-class status. And yet, according to Zheng's estimates, that may be the only choice to avoid mass starvation.


He says the country has to increasingly rely on underground water sources to meet its demands - 70 percent of it now comes from underground, he said. That has had a dramatic effect on a number of aquifers, many of which are emptying at an alarming pace.

In the meantime, the government plans to implement efficiency measures, but few think that is anything but a stopgap measure. That's because usage is occurring faster than replenishment.

In and around Chifeng city, in northern , farmers have had to delay harvesting crops to avoid injury because fields are so dry they have developed cracks up to 32 feet deep. In fact, the city's water bureau says 62 percent of its 51 reservoirs have run dry, leaving more than a quarter million people short of water.


And the problem is spreading. In fact, hundreds of Chinese cities are facing water shortages.


Why is 's water shortage a big deal? Because a nation as powerful as will find a way to secure enough water for its needs. is not about to take a step backwards in its development. And in the future, as fresh water becomes more scarce, wars will be fought over it.

Learn more:http://www.naturalnews.com/032986_food_production_water_shortage.html#ixzz1RyAkOhUJ
Posted by arclein at 12:01 AM

More than likely, China will get it's fingers into the pockets of those that have a "say so" about the Great Lakes...start selling OUR water to China. The greedy slobs that don't care about the US, or have any regard for the American population, would sell their own mothers....but they'll call it by another name.