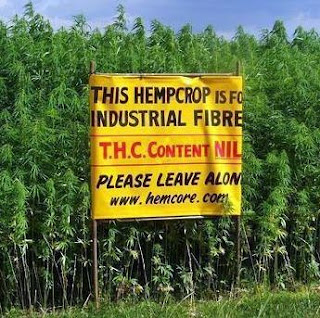 The forgotten fact is that hemp and linen produce long fibers.  Here we discover that it is now practical to also remove the lignin.  This should make the fibers soft. So we now have natural sources of long soft and strong natural fibers.

The bottom line is that both linen and hemp fiber will be rushing back into the market.  This report is on the tip of the process.

In the meantime, Canadian agriculture is leading the way and we will see many products based on hemp flow into the market.

I do not know how the new fibers actually feel or how strong the fabrics will be, but we can assume they match the best cottons in terms of strength at least.  Thus I would suspect that tradition will not protect markets for the range of cotton we have had for two centuries.

Both flax and hemp are capable of flooding the market with natural fibers.

The ’snicker factor’ aside, hemp is serious business

RITA TRICHUR Hemp is fast becoming a staple of daytime TV as Oprah, Dr. Oz and others extol the health virtues of hemp oil, protein powders and pasta. At the same time, industrial interests tout it as a potential base for products ranging from textiles to car parts. As a result, demand is surging in the , and . But American farmers are prohibited from growing hemp. That leaves farmers in – where it’s been a legal crop since 1998 – free to tap the growing interest in hemp-based products.

First, though, they must navigate the shifting sands of public opinion – or, as one report called it, “the snicker factor.”

According to an Alberta Agriculture Department report on industrial hemp production in , the plant’s cultivation evokes chuckles “largely because of its hippy-dippy image and close association with marijuana, its consciousness-altering cousin.”

Nevertheless, this is serious stuff. The North American market for industrial hemp – which has only a minuscule amount of the chemical that gives marijuana its punch – is booming.

For centuries, hemp had been ubiquitous in global commerce – from paper making to the rope used on sailing vessels – until synthetic fibres usurped its naval role and global anti-drug sentiment put paid to the rest.

Now the market, while still small, is growing by about 10 per cent a year, with annual sales between $350-million and $400-million, according to some estimates.

The industry’s goal is to generate more than $100-million for the Canadian economy by 2015, partly by boosting production from 10,855 hectares to 40,000 hectares over that time.

Eager to capitalize on that burgeoning potential, the federal government recently boosted its investment in the industry. In December, 2010, Agriculture announced an investment of more than $728,000 to help the industry boost production capacity and increase exports to the . The amount was split among three funding streams – including some repayable contributions. is also handing out more licences to grow the value-added crop and has increased the number of approved varieties for the 2011 growing season.

Canada’s hemp industry, though, is also grappling with some serious growing pains after years of boom-and-bust production. The high Canadian dollar is eroding the value of exports, and celebrity endorsements notwithstanding, hemp has yet to fully shake its “ditch weed” image with consumers and regulators.

Toward that end, Canadian hemp food products have yet to overcome a key regulatory hurdle with the Food and Drug Administration by achieving “GRAS” status, an acronym for Generally Recognized As Safe.

Without that certification, Canadian companies are prevented from selling hemp to big multinationals like General Mills and Kellogg’s, and another three years’ worth of costly study is required before the Canadian industry can even apply, says the Canadian Hemp Trade Alliance.

Mr. Fata of Harvest says he recognizes those obstacles but is optimistic about the industry’s long-term potential.

Harvest is one of the world’s largest hemp food manufacturers. Its sales growth has averaged about 50 per cent a year since 1998. It currently makes 68 per cent of its sales in the , 30 per cent in and 2 per cent in Europe and .

In addition to health food stores, it is penetrating mainstream grocery chains in the and collaborating with Maple Leaf Foods Inc. on hemp-based research and development in . Harvest has provided product and technical support to Maple Leaf’s majority-owned subsidiary Bread as it experiments with hemp bakery products, Mr. Fata said.

While hemp foods continue to represent the bulk of the Canadian industry’s exports, there is also a growing appetite for hemp fibre for industrial uses. German auto maker Mercedes-Benz, for instance, has been using natural fibre such as hemp, flax, sisal and abaca for many years in various components.

With the price of cotton still high, albeit down from its peak, garment makers are also eyeing hemp as a substitute textile.

Vancouver-based Naturally Advanced Technologies Inc., established in 1998 as Hemptown Clothing Inc., is developing alternative fibres made out of flax and hemp. Its Crailar technology uses an enzyme process to remove lignin, the natural glue that binds fibres like flax and hemp. Doing so gives those fibres a smoother texture and allows them to be processed in new blended fabrics that can result in savings for clothing makers because they require less cotton and are less prone to shrinkage.

Flax is cheaper for Naturally Advanced to process than hemp partly because it contains less lignin and also because it can be grown in the , where both its pilot facility and major partners are based.

“We’re not giving up on hemp. Hemp is just going to follow in or feed in after we lead off with flax,” CEO Ken Barker said.

Moreover, the company is also fielding enquires about its hemp fibre product from a range of other industries, including mattress makers and the medical sector.

Still, Mr. Barker recognizes that there remains a marketing challenge for hemp: “That’s just the reality of the consumer.”\

- Industrial hemp and marijuana are both members of the cannabis plant family, but hemp contains only tiny amounts of the drug delta-9 tetrahydrocannabinol (THC)

- Growing both marijuana and hemp became illegal in in
1938. The ban on commercial hemp production was lifted 1998.