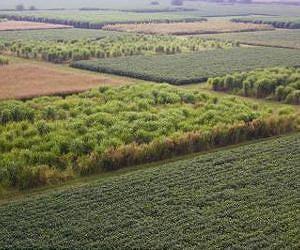 This study at least reminds us of a specific truth.  Corn is a huge drain on soil fertility and was traditionally limited by that.  Almost any productive alternative is plausibly going to do better.

We are assuming that ethanol will remain a significant factor in fuel production.  If that holds up, then switching to dry land feedstocks becomes attractive.  It is all about best practice in land husbandry.  The last decade has been an experiment on the ethanol option that would be better served with alternatives to corn in any event.  Along those same lines, I would like a national program to exploit cattail culture to produce biomass for ethanol, starch and silage.  It is an order of magnitude more productive than anything else and we do use the necessary heavy equipment.

This is a good start at rethinking appropriate soil friendly feedstocks for our needs.

The study used a computer model of plant growth and soil chemistry to compare the ecological effects of growing corn (Zea mays L.); miscanthus (Miscanthus x giganteus), a sterile hybrid grass used in bioenergy production in Western Europe; and switchgrass (Panicum virgatum L.), which is native to the U.S.

The analysis found that switching 30 percent of the least productive corn acres to miscanthus offered the most ecological advantages.

"If cellulosic feedstocks (such as miscanthus) were planted on cropland that is currently used for ethanol production in the U.S., we could achieve more ethanol (plus 82 percent) and grain for food (plus 4 percent), while reducing nitrogen leaching (minus 15 to 22 percent) and greenhouse gas emissions (minus 29 percent to 473 percent)," the researchers wrote in their report, published in the journal Frontiers in Ecology and the Environment.

"The whole has been, since the advent of modern agriculture, a source of greenhouse gases to the atmosphere."

Miscanthus grows in thick stands up to 13 feet tall in test plots in . It does well on marginal land without being fertilized, so using it as a biofuelfeedstock instead of corn would eliminate a major source of air and water pollution, said. Nitrous oxide, a byproduct of the fertilizers used on cornfields, "is actually a more potent greenhouse gas than carbon dioxide," she said.

"Both switchgrass and miscanthus are perennial grasses, which means that you don't have to till every year, you don't have to plant every year, so there's much less soil disturbance happening than with corn," Davis said. "And because the root system remains in place year after year, there's more carbon going into the soil."

Several hurdles remain before the transition from corn to cellulosic ethanolproduction can occur on a commercial scale, the researchers said. Converting the sugars in corn to ethanol is easier than releasing the energy locked in plant stems and leaves.

"We know that these grasses are enormously productive; we know the agronomy works; we know the ecology works," DeLucia said. "So the next step is to break down the economic barriers by making an efficient conversion chain from lignocellulosics to ethanol."

DeLucia said most scientists in the field expect this to be achieved within a decade.

The paper, "Impact of Second-Generation Biofuel Agriculture on Greenhouse GasEmissions in the Corn-Growing Regions of the ," is available online or from the .