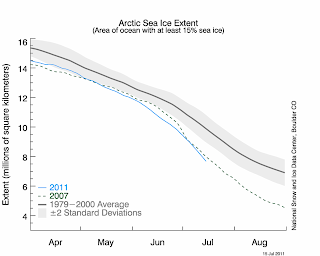 The ongoing destruction of the Arctic sea ice appears to be in full swing this summer.  So any relief due to a cold continental winter turns out to be non existent.

As i predicted in 2007 even before the perfect storm that gave us the record low, the sea ice is on a downward spiral that will be much shorter than even these predictions here.  The thick ice is already mostly gone and is into the last stages and await the right wind conditions to produce a dramatic reduction.

My normal monitoring source has not been up this year so I am lagging behind, but this will be big news once everyone wakes up to what is now happening.

Spring breakup is under way in the , although the past three years masked it all because the ice loss was ongoing but the surface cover was maintained.  That is now collapsing.

It has been clear for some time that total ice mass is a terribly suspect science.   If we are actually losing as much as suggested by earlier work, then we are in the final laps and the seas will be quite clear beginning as early as next year and certainly over the next several years. As usual no one understands the nature of a non linear decay.

Arctic may be ice-free within 30 years

Sea ice in the Arctic is melting at a record pace this year, suggesting warming at the north pole is speeding up and a largely ice-free can be expected in summer months within 30 years.

The area of the Arctic ocean at least 15% covered in ice is this week about 8.5 m sq kilometres – lower than the previous record low set in 2007 – according to satellite monitoring by the US National Snow and Ice Data Centre (NSIDC) in Boulder, Colorado. In addition, new data from the , shows that the thickness of Arctic ice this year is also the lowest on record.

In the past 10 days, the has been losing as much as 150,000 square kilometres of sea a day, said Mark Serreze, director of the NSIDC.

"The extent [of the ice cover] is going down, but it is also thinning. So a weather pattern that formerly would melt some ice, now gets rid of much more. There will be ups and downs, but we are on track to see an ice-free summer by 2030. It is an overall downward spiral."

Global warming has been melting Arctic sea ice for the past 30 years at a rate of about 3% per decade on average. But the two new data sets suggest that, if current trends continue, a largely ice-free in summer months is likely within 30 years. That is up to 40 years earlier than was anticipated in the last Intergovernmental Panel on Climate Change (IPCC) assessment report.

Sea ice, which is at its maximum extent in March and its lowest in September each year, is widely considered to be one of the "canaries in the mine" for climate change, because the poles are heating up faster than anywhere else on Earth. According to NSIDC, air temperatures for June 2011 were between 1 and 4 °C warmer than average over most of the Arctic Ocean.

The findings support a recent study in the journal Science that suggested water flowing from the Atlantic into the Arctic ocean is warmer today than at any time in the past 2,000 years and could be one of the explanations for the rapid sea ice melt now being observed.

Computer simulations performed by Nasa suggest that the retreat of Arctic sea ice will not continue at a constant rate. Instead the simulations show a series of abrupt decreases such as the one that occurred in 2007, when a "perfect storm" of weather conditions coincided and more ice was lost in one year than in the previous 28 years combined. Compared to the 1950s, over half of the Arctic sea ice had disappeared.

What concerns polar scientists is that thicker ice which does not melt in the summer is not being formed fast as the ice is melting. On average each year about half of the first year ice, formed between September and March, melts during the following summer. This year, says Jeff Masters, founder of the Weather Underground climate monitoring website, a high pressure system centred north of Alaska has brought clear skies and plenty of ice-melting sunshine to the Arctic.

Sea ice has an important effect on the heat balance of the polar oceans, since it insulates the (relatively) warm ocean from the much colder air above, thus reducing heat loss from the oceans. Sea ice also has a high albedo – about 0.6 when bare, and about 0.8 when covered with snow – compared to the sea – about 0.15 – and thus the loss of sea ice increased the absorption of the sun's warmth by the sea.

This article was shared by our content partner the Guardian. environmentalresearchweb is now a member of the Guardian Environment Network.
Posted by arclein at 12:01 AM