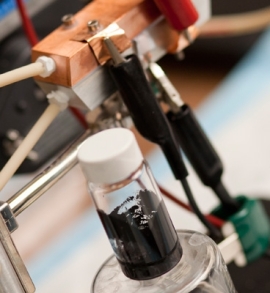 This is a new way to organize a battery using best chemistry while applying flow battery concepts.  If it can be made to work, then the obvious best application will be utility grade energy storage.

I do not see it as a transportation battery.

In static situations, the ability to move storage around does matter and massive certainly works.  Cheaper flow battery systems have much lower energy densities and have been slow to be adopted.

This is all a part of the ongoing effort to master energy storage with greater efficiencies.  We have seen many protocols been worked on.

New battery design could give electric vehicles a jolt

Significant advance in battery architecture could be breakthrough for electric vehicles and grid storage.

A sample of ' crude' — a black, gooey substance that can power a highly efficient new type of battery. A prototype of the semi-solid flow battery is seen behind the flask.

A radically new approach to the design of batteries, developed by researchers at MIT, could provide a lightweight and inexpensive alternative to existing batteries for electric vehicles and the power grid. The technology could even make “refueling” such batteries as quick and easy as pumping gas into a conventional car.


The new battery relies on an innovative architecture called a semi-solid flow cell, in which solid particles are suspended in a carrier liquid and pumped through the system. In this design, the battery’s active components — the positive and negative electrodes, or cathodes and anodes — are composed of particles suspended in a liquid electrolyte. These two different suspensions are pumped through systems separated by a filter, such as a thin porous membrane.


The work was carried out by Mihai Duduta ’10 and graduate student Bryan Ho, under the leadership of professors of materials science W. Craig Carter and Yet-Ming Chiang. It is described in a paper published May 20 in the journal Advanced Energy Materials. The paper was co-authored by visiting research scientist Pimpa Limthongkul ’02, postdoc Vanessa Wood ’10 and graduate student Victor Brunini ’08.


One important characteristic of the new design is that it separates the two functions of the battery — storing energy until it is needed, and discharging that energy when it needs to be used — into separate physical structures. (In conventional batteries, the storage and discharge both take place in the same structure.) Separating these functions means that batteries can be designed more efficiently, Chiang says.


The new design should make it possible to reduce the size and the cost of a complete battery system, including all of its structural support and connectors, to about half the current levels. That dramatic reduction could be the key to making electric vehicles fully competitive with conventional gas- or diesel-powered vehicles, the researchers say.


Another potential advantage is that in vehicle applications, such a system would permit the possibility of simply “refueling” the battery by pumping out the liquid slurry and pumping in a fresh, fully charged replacement, or by swapping out the tanks like tires at a pit stop, while still preserving the option of simply recharging the existing material when time permits.


Flow batteries have existed for some time, but have used liquids with very low energy density (the amount of energy that can be stored in a given volume). Because of this, existing flow batteries take up much more space than fuel cells and require rapid pumping of their fluid, further reducing their efficiency.


The new semi-solid flow batteries pioneered by Chiang and colleagues overcome this limitation, providing a 10-fold improvement in energy density over present liquid flow-batteries, and lower-cost manufacturing than conventional lithium-ion batteries. Because the material has such a high energy density, it does not need to be pumped rapidly to deliver its power. “It kind of oozes,” Chiang says. Because the suspensions look and flow like black goo and could end up used in place of petroleum for transportation, Carter says, “We call it ‘ crude.’”


The key insight by Chiang’s team was that it would be possible to combine the basic structure of aqueous-flow batteries with the proven chemistry of lithium-ion batteries by reducing the batteries’ solid materials to tiny particles that could be carried in a liquid suspension — similar to the way quicksand can flow like a liquid even though it consists mostly of solid particles. “We’re using two proven technologies, and putting them together,” Carter says.


In addition to potential applications in vehicles, the new battery system could be scaled up to very large sizes at low cost. This would make it particularly well-suited for large-scale electricity storage for utilities, potentially making intermittent, unpredictable sources such as wind and solar energy practical for powering the electric grid.


The team set out to “reinvent the rechargeable battery,” Chiang says. But the device they came up with is potentially a whole family of new battery systems, because it’s a design architecture that “is not linked to any particular chemistry.” Chiang and his colleagues are now exploring different chemical combinations that could be used within the semi-solid flow system. “We’ll figure out what can be practically developed today,” Chiang says, “but as better materials come along, we can adapt them to this architecture.”


Yury Gogotsi, Distinguished University Professor at Drexel University and director of Drexel’s Nanotechnology Institute, says, “The demonstration of a semi-solid lithium-ion battery is a major breakthrough that shows that slurry-type active materials can be used for storing electrical energy.” This advance, he says, “has tremendous importance for the future of energy production and storage.”


Gogotsi cautions that making a practical, commercial version of such a battery will require research to find better cathode and anode materials and electrolytes, but adds, “I don’t see fundamental problems that cannot be addressed — those are primarily engineering issues. Of course, developing working systems that can compete with currently available batteries in terms of cost and performance may take years.”


Chiang, whose earlier insights on lithium-ion battery chemistries led to the 2001 founding of MIT spinoff A123 Systems, says the two technologies are complementary, and address different potential applications. For example, the new semi-solid flow batteries will probably never be suitable for smaller applications such as tools, or where short bursts of very high power are required — areas where A123’s batteries excel.


The new technology is being licensed to a company called 24M Technologies, founded last summer by Chiang and Carter along with entrepreneur Throop Wilder, who is the company’s president. The company has already raised more than $16 million in venture capital and federal research financing.


The development of the technology was partly funded by grants from the Department of Defense’s Defense Advanced Research Projects Agency and Advanced Research Projects Agency – Energy (ARPA-E). Continuing research on the technology is taking place partly at 24M, where some recent MIT graduates who worked on the project are part of the team; at MIT, where professors Angela Belcher and Paula Hammond are co-investigators; and at , with Professor Glenn Amatucci.


The target of the team’s ongoing work, under a three-year ARPA-E grant awarded in September 2010, is to have, by the end of the grant period, “a fully-functioning, reduced-scale prototype system,” Chiang says, ready to be engineered for production as a replacement for existing electric-car batteries.