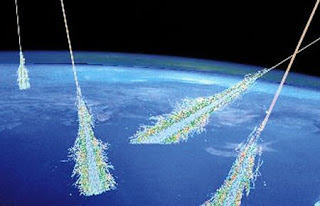 It is turning out that the solar driven cosmic ray flux is way more critical in terms of driving climate change than anyone has ever anticipated.  The little Ice Age is the only real hint in our modern data and not quite enough to hang anyone’s hat firmly on.

What is brought out here is that the cosmic ray flux matters far more than previously imagined.  What is more is that it is directly measurable in affected proxies in tree rings in particular and ice cores additionally.  So it is possible to define periods of high and low solar activity on the necessary decadal scale.

Since climate change is a lagging indicator it is important to know what direction the solar drivers are pointed.  Be glad that the late sunspot cycle is hotting up.

Get ready for the next big bombshell in the man-made warming debate. The world’s most sophisticated particle study laboratory—CERN in —will soon announce that more cosmic rays do, indeed, create more clouds in earth’s atmosphere. More cosmic rays mean a cooler planet. Thus, the solar source of the earth’s long, moderate 1,500-year climate cycle will finally be explained.

Cosmic rays and solar winds are interesting phenomena—but they are vastly more relevant when an undocumented theory is threatening to quadruple society’s energy costs. The IPCC wants $10 gasoline, and “soaring” electric bills to reduce earth’s temperatures by an amount too tiny to measure with most thermometers.

In 2007, when Fred Singer and I published Unstoppable Global Warming Every 1,500 Years, we weren’t terribly concerned with cosmic rays. We knew the natural, moderate warming/cooling cycle was real, from the evidence in ice cores, seabed sediments, fossil pollen and cave stalagmites. The cycle was the big factor that belied the man-made warming hysteria of the Intergovernmental Panel on Climate Change

When Willi Dansgaard and Hans Oeschger discovered the 1,500 year cycle in the ice cores in 1984, they knew immediately that it was solar-powered. They’d seen exactly the same cycle in the carbon 14 molecules in trees, and in the beryllium 10 molecules in ice cores. Both sets of molecules are formed when cosmic rays strike our atmosphere. The cycle had produced a whole series of dramatic, abrupt Medieval-Warming-to-Little-Ice-Age climate changes.

The IPCC, for its part, announced that the sun could not be the forcing factor in any major climate change because the solar irradiation was too small. IPCC did not, however, add up the other solar variations that could amplify the solar irradiation. Nor had the IPCC programmed its famed computer models with the knowledge of the Medieval Warming (950–1200 AD), the Roman Warming (200 BC–600 AD), or the big Holocene Warmings centered on 6,000 and 8,000 BC.

The IPCC apparently wanted to dismiss the sun as a climate factor—to leave room for a CO2 factor that has only a 22 percent correlation with our past thermometer record. Correlation is not causation—but the lack of CO2 correlation is deadly to the IPCC theory.

Henrik Svensmark of the Danish Space Research Institute added the next chapter in the climate cycle story, just before our book was published. His cloud chamber experiment showed natural cosmic rays quickly created vast numbers of tiny “cloud seeds” when our mix of atmospheric gases was bombarded with ultra-violet light. Since clouds often cover 30 percent of the earth’s surface, a moderate change in cloud cover clearly could explain the warming/cooling cycle.

Svensmark noted the gigantic “solar wind” that expands when the sun is active—and thus blocks many of the cosmic rays that would otherwise hit the earth’s atmosphere. When the sun weakens, the solar wind shrinks. Recently, the Solar Observatory reported a very long period of “quiet sun” and predicted 30 years of cooling.

Last year, ’s did another experiment with a particle accelerator that fully confirmed the Svensmark hypothesis: cosmic rays help to make more clouds and thus could cool the earth.

The CERN experiment is supposed to be the big test of the Svensmark theory. It’s a tipoff, then, that CERN’s boss, Rolf-Dieter Heuer, has just told the German magazine Die Welt that he has forbidden his researchers to “interpret” the forthcoming test results. In other words, the CERN report will be a stark “just the facts” listing of the findings. Those findings must support Svensmark, or Heuer would never have issued such a stifling order on a major experiment.

I agree with you on this and i have gone much farther in tracing back a 1100 year cycle roughly for 3 to 4 thousand years.