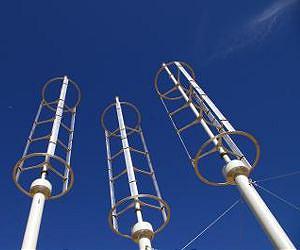 We have already posted on the huge improvement in general area efficiency to be attained through ‘schooling’ propeller type wind turbines.  Here they show vertical axis type turbines are able to improve energy density ten fold in quite low build outs.

It is certainly time to see if we can winkle out more energy from established operations and these are two good approaches.  As we replace old hardware in prime locations this all works.

New projects are often driven by financing expediency and little engineering finesse.  Of course, these approaches are in their infancy and we do not have a manual as yet.

These are vertical-axis wind turbines at the Field Laboratory for Optimized Wind Energy (FLOWE) facility in northern . Credit: John Dabiri/Caltech.

The power output of windfarms can be increased by an order of magnitude-at least tenfold-simply by optimizing the placement of turbines on a given plot of land, say researchers at the California Institute of Technology (Caltech) who have been conducting a unique field study at an experimental two-acre wind farm in northern Los Angeles County.

A paper describing the findings-the results of field tests conducted by John Dabiri, Caltech professor of aeronautics and bioengineering, and colleagues during the summer of 2010-appears in the July issue of the Journal of Renewable and Sustainable Energy.

Dabiri's experimental farm, known as the Field Laboratory for Optimized Wind Energy (FLOWE), houses 24 10-meter-tall, 1.2-meter-wide vertical-axis wind turbines (VAWTs)-turbines that have vertical rotors and look like eggbeaters sticking out of the ground. Half a dozen turbines were used in the 2010 field tests.

Despite improvements in the design of wind turbines that have increased their efficiency, wind farms are rather inefficient, Dabiri notes. Modern farms generally employ horizontal-axis wind turbines (HAWTs)-the standard propeller-like monoliths that you might see slowly turning, all in the same direction, in the hills of , north of .

In such farms, the individual turbines have to be spaced far apart-not just far enough that their giant blades don't touch. With this type of design, the wake generated by one turbine can interfere aerodynamically with neighboring turbines, with the result that "much of the wind energy that enters a wind farm is never tapped," says Dabiri.

He compares modern farms to "sloppy eaters," wasting not just real estate (and thus lowering the power output of a given plot of land) but much of the energy resources they have available to them.

Designers compensate for the energy loss by making bigger blades and taller towers, to suck up more of the available wind and at heights where gusts are more powerful.

"But this brings other challenges," Dabiri says, such as higher costs, more complex engineering problems, a larger environmental impact. Bigger, taller turbines, after all, mean more noise, more danger to birds and bats, and-for those who don't find the spinning spires visually appealing-an even larger eyesore.

The solution, says Dabiri, is to focus instead on the design of the wind farm itself, to maximize its energy-collecting efficiency at heights closer to the ground. While winds blow far less energetically at, say, 30 feet off the ground than at 100 feet, "the global wind power available 30 feet off the ground is greater than the world's electricity usage, several times over," he says.

That means that enough energy can be obtained with smaller, cheaper, less environmentally intrusive turbines-as long as they're the right turbines, arranged in the right way.

VAWTs are ideal, Dabiri says, because they can be positioned very close to one another. This lets them capture nearly all of the energy of the blowing wind and even wind energy above the farm.

Having every turbine turn in the opposite direction of its neighbors, the researchers found, also increases their efficiency, perhaps because the opposing spins decrease the drag on each turbine, allowing it to spin faster (Dabiri got the idea for using this type of constructive interference from his studies of schooling fish).

In the summer 2010 field tests, Dabiri and his colleagues measured the rotational speed and power generated by each of the six turbines when placed in a number of different configurations. One turbine was kept in a fixed position for every configuration; the others were on portable footings that allowed them to be shifted around.

The tests showed that an arrangement in which all of the turbines in an array were spaced four turbine diameters apart (roughly 5 meters, or approximately 16 feet) completely eliminated the aerodynamic interference between neighboring turbines.

By comparison, removing the aerodynamic interference between propeller-style wind turbines would require spacing them about 20 diameters apart, which means a distance of more than one mile between the largest wind turbines now in use.

"Dabiri's bioinspired engineering research is challenging the status quo in wind-energy technology," says Ares Rosakis, chair of Caltech's Division of Engineering and Applied Science and the Theodore von Karman Professor of Aeronautics and professor of mechanical engineering. "This exemplifies how Caltech engineers' innovative approaches are tackling our society's greatest problems."

"We're on the right track, but this is by no means 'mission accomplished,'" Dabiri says. "The next steps are to scale up the field demonstration and to improve upon the off-the-shelf wind-turbine designs used for the pilot study." Still, he says, "I think these results are a compelling call for further research on alternatives to the wind-energy status quo."

This summer, Dabiri and colleagues are studying a larger array of 18 VAWTs to follow up last year's field study. Video and images of the field site can be found here. 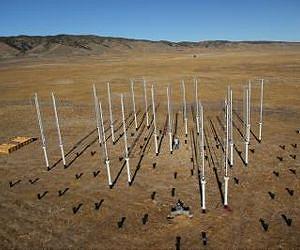 But California Institute of Technology researchers revisited some of the fundamental assumptions that guided the wind industry for the past 30 years, and now believe that a new approach to wind farm design-one that places wind turbines close together instead of far apart-may provide significant efficiency gains.

This challenges the school of thought that the only remaining advances to come are in developing larger turbines, putting them offshore, and lobbying for government policies favorable to the further penetration of wind power in energy markets.

"What has been overlooked to date is that, not withstanding the tremendous advances in wind turbine technology, wind 'farms' are still rather inefficient when taken as a whole," explains John Dabiri, professor of Engineering and Applied Science, and director of the Center for Bioinspired Engineering at Caltech.

"Because conventional, propeller-style wind turbines must be spaced far apart to avoid interfering with one another aerodynamically, much of the wind energy that enters a wind farm is never tapped. In effect, modern wind farms are the equivalent of 'sloppy eaters.' To compensate, they're built taller and larger to access better winds."

But this increase in height and size leads to frequently cited issues such as increased cost and difficulty of engineering and maintaining the larger structures, other visual, acoustic, and radar signatures problems, as well as more bat and bird impacts.

Dabiri is focusing on a more efficient form of wind 'farm' design, relegating individual wind turbine efficiency to the back seat. He describes this new design in the American Institute of Physics' Journal of Renewable and Sustainable Energy.

"The available wind energy at 30 feet is much less abundant than that found at the heights of modern wind turbines, but if near-ground wind can be harnessed more efficiently there's no need to access the higher altitude winds," he says.

The Caltech design targets that power by relying on vertical-axis wind turbines (VAWTs) in arrangements that place the turbines much closer together than is possible with horizontal-axis propeller-style turbines.

VAWTs provide several immediate benefits, according to Dabiri, including effective operation in turbulent winds like those occurring near the ground, a simple design (no gearbox or yaw drive) that can lower costs of operation and maintenance, and a lower profile that reduces environmental impacts.

Two of the primary reasons VAWTs aren't more prominently used today are because they tend to be less efficient individually, and the previous generation of VAWTs suffered from structural failures related to fatigue.

"With respect to efficiency issues, our approach doesn't rely on high individual turbine efficiency as much as close turbine spacing. As far as failures, advances in materials and in predicting aerodynamic loads have led to new designs that are better equipped to withstand fatigue loads," says Dabiri.

Field data collected by the researchers last summer suggests that they're on the right track, but this is by no means 'mission accomplished.' The next steps involve scaling up their field demonstration and improving upon off-the-shelf wind turbine designs used for the pilot study.

Ultimately, the goal of this research is to reduce the cost of wind energy. "Our results are a compelling call for further research on alternatives to the wind energy status quo," Dabiri notes.

"Since the basic unit of power generation in this approach is smaller, the scaling of the physical forces involved predicts that turbines in our wind farms can be built using less expensive materials, manufacturing processes, and maintenance than is possible with current wind turbines."

A parallel effort is underway by the researchers to demonstrate a proof-of-concept of this aspect as well.