Time to Annex Judea and Samaria? 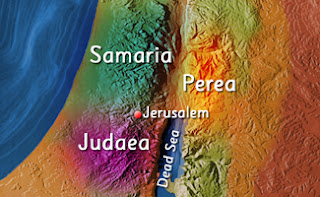 The fact of the matter is that there is now movement on the issue of conflict in the .  A combined Palestinian authority is sorting itself out.  It may have the capacity to settle with which not even Arafat ever properly enjoyed.  It will not have the capacity to enforce its will on and must settle for a negotiated peace.  Failure to do so opens the door for outright annexation and expulsion of all Palestinians.

The creation of a Palestinian state in also allows for the expulsion of those Palestinians in , thus ending the ongoing conflict there

My point in all this is that intransience can be solved by outright expulsion.  This was done to the Jews two thousand years ago by the Romans and extensively by Stalin during and after World War II.

It is clear also that the surrounding states have educated their populations in an ideology of anti Semitism and made normal human relationships between the two peoples difficult.  This can not be changed quickly and would need a complete reeducation program imposed from the outside.

is presently going through a major upheaval and may sort itself out into a better regime.  It by itself is no particular threat and with the Golan annexed now for years, time alone is healing those wounds.  The fact remains that a new Syrian regime should be quite happy to settle with for a large check and support.  It is not hard to see a completely sorted out peace with and even if an expulsion of the Palestinians takes place.

A newly Palestinian controlled (which is really inevitable) will then settle into sorting their society out and can actually ignore their western border on the as long as they like.

That leaves us with the real concern which is .  has military capacity to make a war between and a near run thing, at least in the minds of either side.  Victory for either side must be the total destruction of the opposing army.  It really could not be worse.

The expulsion of the Palestinians from into would eliminate the purported cause of conflict, while the established settlement agreement is certainly suitable for the leadership of both sides.  The problem again is an indoctrinated population hungry for the glory of victory against the Israelis who may make it way too easy for Islamicists to tear up the treaty and to go to war.

The danger is real but could well sort itself out in ’s favor.

The hard fact today on the ground is that all ’s enemies are fully distracted by internal conflicts.  Unilaterally annexing Judea, and and any other scraps as needed is doable and puts in the driver’s seat in terms of future negotiations with whatever successor regimes emerge from and .  The Palestinian government can be expelled into .

Thus a declaration of Palestinian Statehood actually opens the door for outright annexation of all lands presently controlled by as an option.  The new Palestinian authority would in fact be negotiating for alms from the new owners.

Time to Annex Judea and ?

I do not understand why has not already annexed Judea and . These regions, the heart of ancient , are generally known today as the “West Bank” of the . Three times, Arab states have attacked in an effort to carry out a second Holocaust. Three times, has defeated them. No principle of justice required , having escaped annihilation by force of arms, to retreat back to the inadequate borders of 1948.

When the defeated in the Mexican War, what did we do? We annexed the Southwest. When defeated in World War I (more or less), what did it do? It annexed and . After World War II, how did the Dutch obtain compensation from ? They annexed certain lands that were later sold back to for a large sum. Many such examples could be offered.

If had annexed Judea and decades ago, most of the subsequent tortured history of its relations with the Palestinians would have been avoided. Most observers have assumed it is too late for such a “radical” step. But the Palestinian Authority’s threat to declare its own nationhood unilaterally, along with its rapprochement with Hamas, has caused the possibility of annexation to surface once again.

Ideas about annexing parts of the West Bank that until recently were considered extreme have been gaining traction in the Knesset in recent weeks as the Palestinian Authority continues threatening to declare a state unilaterally in September. …

“We’ll have to protect ourselves,” [National Infrastructures Minister Uzi Landau] said. “If [the Palestinians declare a state], I’m going to suggest to my government to extend our sovereignty over the and over the highly populated blocs we have in Judea and , just to start with.” …

“A Palestinian declaration of statehood would officially bury the Accords, which state that final borders will be decided via negotiations and that unilateral actions constitute violation of the accords,” [Likud MK Danny] Danon said. “The Palestinians declaring a state would free us of all the diplomatic, security, and economic commitments we made in the Accords.”

Danon favors responding to a Palestinian declaration of statehood by annexing all of Area C, which includes all the West Bank’s Jewish settlements and empty land. He said Prime Minister Binyamin Netanyahu should follow the example of his predecessors Levi Eshkol, who annexed eastern , and Menachem Begin, who annexed the .

A source close to the prime minister said that Netanyahu has kept his cards close to his chest as to how he would respond to Palestinian unilateral action, but that he has said in the past that has its own unilateral options.

Danon said he hoped the threat of annexation could help Netanyahu persuade European leaders to stop the United Nations from voting on Palestinian statehood at the UN General Assembly in September.

My own inclination would be to aim higher–annex all of the West Bank, not just portions, and entirely moot the idea of an independent Palestinian state, not just deter the U.N. from supporting one for the moment.

Before every boxing match, the referee meets in the center of the ring with the boxers. He goes over the rules of the match–the three knockdown rule does not apply, you can’t be saved by the bell, and so on. The referee always concludes by telling the boxers to “defend yourselves at all times.” That instruction is really rather profound: boxing has rules, more so than most human activities, but at some level you can’t rely on them. The bell may ring; the referee may break up a clinch or pause the action to instruct the boxers or communicate with the judges. But in the ring you are never safe, and there is really only one line of defense: you. The boxer never puts down his guard.

has always understood this. International law, the United Nations, and world opinion are all more or less useless. ’s own resources and determination and the force of arms have alone preserved the country’s existence. So I say: if annexing the West Bank is “illegal,” then, having ignored the Arabs’ violation of every known rule of law for more than 60 years, the world will just have to ignore an illegal act by , too.

What would become of the Arabs now living on the ? The answer depends in part on demographic analysis, but I would propose a Right of Return: all Arabs now living in Judea and would be allowed, or if necessary required, to return to their compatriots in , , and .

In my view, should have reclaimed Judea and long ago. Most think it is now too late for such decisive action; but some will say, better late than never.

This article and what it suggests is absolutely outrageous and a sure fire way to start Armageddon in the Middle East. Why anyone would consider such a politically and military disaster is quite beyond intelligent consideration. I can't believe there are individuals out there like the author so devoid of morals, ethics and plain common sense as to recommend another bloodletting.