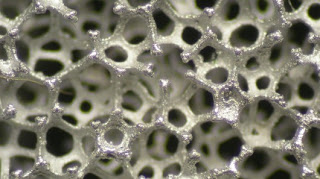 I suspect we are coming closer to a shaped battery system that is an integral part of an automobile’s body.  It certainly appears able to provide actual strength.  Thus we can end up with floor panels able to both protect and to carry the necessary energy.  Once we start replacing structural mass with battery capacity, the range rises naturally.

Once properly achieved, we at looking at electrical vehicles with huge ranges and without drivers to avoid unnecessary accidents.  This is all coming and we can see here a glimpse of the materials and art that make it possible.

The transition to EV personal transportation has just begun and is still pretty tentative only because of the lingering range issue.  It is certainly going to be solved soon and this will eliminate oil products from the fuel chain in as long as it takes to cycle through the manufacturing and sales cycle.

Range anxiety, the fear that such vehicles will leave the vehicle's occupants stranded well short of their destination, remains one of, if not the main barrier to the widespread adoption of EVs. A new material developed by Japanese company Sumitomo Electric could help allay such fears by potentially improving the capacity of lithium-ion batteries by 1.5 to three times, and therefore extending the range of EVs by an extra 50 to 200 percent. That would give a Nissan LEAF a range of up to 109 to 219 miles (175 to 352 km) or a Tesla Roadster a range of up to 366 to 732 miles (589 to 1,178 km) - enough to assuage the range anxiety of the most fretful drivers.

The material in question is called Aluminum-Celmet that features an Aero bar-like, three-dimensional mesh-like structure that forms interconnected, open and spherical pores. Sumitomo Electric had previously been producing its proprietary Celmet material made from nickel or nickel chrome alloy. Its high porosity of up to 98 percent and favorable filling, retaining and current-collecting performance when used with an active material, led to Celmet recently being adopted as a positive electrode current collector in hybrid vehicle nickel-hydrogen batteries. It is also easy to process the porous metal into various shapes by cutting and stamping.

Using a similar process used for producing nickel Celmet, the company has now succeeded in developing Aluminum-Celmet that shares the high porosity of Celmet, but is lighter, offers greater electrical conductivity and excellent corrosion resistance - all attributes that make it attractive for use in lithium-ion batteries for EVs and other batteries operating at high charge/discharge voltages.

Sumitomo Electric says that by replacing the aluminum foil used for the positive electrode in conventional lithium-ion batteries with Aluminum-Celmet's three-dimensional mesh-like structure increases the amount of positive active per unit area. According to the company's trial calculations, the material could increase the capacity of electric vehicle onboard battery packs 1.5 to 3 times. This could extend the range of electric vehicles using the same volume battery pack by an extra 200 percent, or maintain the existing range while reducing the battery volume by one to two-thirds.

While electric vehicles are the most immediately obvious use for extended capacity batteries, Sumitomo points out that such technology also holds advantages for reducing the physical footprint of home-use batteries for storing power from solar and other renewable sources, as well as fuel cells. Similarly, the material can also be used for improving the capacity and reducing the footprint of capacitors.

Sumitomo Electric has set up a small-scale production line in in an effort to accelerate development of Aluminum-Cemet with an eye towards mass production and commercialization for such applications.