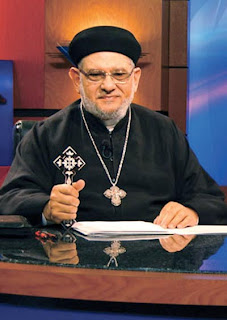 This is something that we in the West forget and do not appreciate.  It is that the true challenge to Islam is here. The advent of modern communication has opened the door to indigenous spiritual teachers to speak to millions.  Were they were once stifled and constrained to small audiences, they can now talk to the whole Arabic (and Farsi et al) world from a studio.  They can present their knowledge and challenge Islamic teachers to respond from the same base of scripture.

Obviously this teacher has already shown the Arab world that he has a compelling position and that Islam lacks an answer.  Thus we see conversions taking place.

I had wondered at that because it was hardly obvious were such individuals could receive instruction.  Of course everyone claims huge numbers, but any conversions in Islamic lands are extraordinary.

What we now see is the emergence of a counter revolution overtaking the Islamic world as Christians in particular exploit the glaring weaknesses of the Koran itself to drive home their message.  I do not think that Islam has a proper answer to this challenge which is why they are already succumbing to using threats.

The Christian enterprise has gained astonishing momentum in the past two decades.  Historically, it arises and never seems to ever go away and with each generation it appears to generally strengthen.  The same can be said of all religions, but the capacity for creating new members without coercion is unique.  Others either use coercion too freely or they look for those who are seeking.

The claim of over 100 million followers in seems unlikely except rough sampling finds their presence.  The fact is that they establish a viable minority everywhere and this core strengthens as the decades pass.

Modern communication is now allowing the same to happen in the Islamic world with the teachers wonderfully insulated from the political powers.

From around 2005-2010, this 76 year-old Coptic priest was Islam’s bane. Appearing weekly on Arabic satellite, where he was viewed by an estimated 60 million people worldwide, mostly Muslims, he meticulously exposed any number of theological problems with Islam—all from Islam’s own books—while simultaneously evangelizing from his own book, the Bible.

His mission “is to attack Islam, not to attack Muslims but to save them because they are deceived. As I love Muslims, I hate Islam.’

And he has been effective: Mass conversions to Christianity, open and clandestine, have resulted. Indeed, years back al-Jazeera aired a segment complaining about Fr. Zakaria’s “unprecedented evangelical raid” on the Muslim world; similarly, one Sheikh Ahmad al-Qatani lamented that as many as six million Muslims annually “apostatize” to Christianity.

Unsurprisingly, Fr. Zakaria’s exploits caused al-Qaeda to proclaim him “one of the most wanted infidels in the world,” putting a $60 million bounty on his head; undeterred, the priest kept going, his viewers and converts multiplying by the week.

Then, in May 2010, after a particularly graphic episode on Muhammad, his shows inexplicably stopped airing. His enemies exulted. Muslim leaders, preachers, and sheikhs appeared on TV, gleefully announcing that Allah had silenced the great enemy of Islam.

Yet, over a year after his many foes—external and internal, Muslim and non-Muslim—have managed to stifle him, Fr. Zakaria is back on satellite, now with his own station Fady TV (Redeemer TV), “a channel for those searching for the truth.”

Though other Islam-critics and evangelists have appeared on Arabic satellite since, many with a good following, it is clear that people have not forgotten the priest, the original trailblazer of open and honest talk on Islam—the original scourge of Islam.

Watching the first episode of his new show, “Knowledge of the Truth,” was like witnessing a reunion between a lost flock and its spiritual shepherd. Viewer after viewer—Christians and Muslims, much more of the latter—called in to express how much they had sorely missed the evangelist, and how happy they were to see him again, some in tears, others in joyous laughter.

And while their words were full of sincere and enthusiastic praise—many insisted that he is a living saint, others a modern day St. Paul—it was only when an elderly-sounding woman asserted that everyone must support Fr. Zakaria, not for his sake, but for the sake of his work liberating Muslims from bondage, that the normally stoic Zakaria broke down in tears.

You see, while Western critics are limited to making secular arguments against specific aspects of Islam—for instance, that it is illiberal, intolerant, sexist—he makes spiritual arguments against the very foundations of the religion.

This is not to say that Western polemics are not beneficial; they are, in that they awaken Western peoples to the nature of Islam. However, arguing or even proving that Islam falls short of Western/secular standards has little impact on Muslims—except perhaps to make them more tenacious of their faith (the inevitable result of comparing apples and oranges).

But an attack on the veracity of the religion itself—an attack articulated through aspiritual as opposed to a secular paradigm—must be confronted by Muslims.

In short, Fr. Zakaria’s success rests in the fact that he fights fire with fire; that he speaks the same language Muslims do—not just literally, Arabic, but more importantly, figuratively, the language of religion and faith, the language of God. He cannot simply be ignored.

For example, during this, his first episode, he discussed Sheikh Huwaini‘s recent assertions that Islam advocates plundering, enslaving, buying, and selling infidels. Many have written about this anecdote either to show that Islam is intrinsically violent, or that “radical Islamism” is spreading, or that Islamic teachings are incompatible with the West.

But Fr. Zakaria takes it a step further—takes it right to the heart of the matter. After asserting that “God created mankind in his image,” he sincerely addressed his Muslim viewers: “Would God truly want you to kill your neighbor, to enslave him? Would the Almighty truly want believers to buy and sell other human beings like animals? Think people! Use your minds, listen to your hearts—for your souls are at stake!”

The same reason the secular mindset may find this approach too simplistic or “unsophisticated” is the same reason it is far from comprehending Islam.

Still in its early stages of development and financially challenged, Fady TV has yet to reach the Middle East, where the real battle for souls is waged, though the priest is hopeful. The station is set to air entire programs dedicated to examining various topics in depth, including the Koran, the Hadith, Muhammad, and Allah.

As I previously did, I plan on following and summarizing Fr. Zakaria’s programs. See for example “The Perverse Sexual Habits of the Prophet” and “Was Muhammad a Messenger from God or Satan?” for a sampling.

For more information on this singular priest, read his exclusive 2009 FPM interview, wherein he discussed his life story, including the torments he experienced for preaching to Muslims in . Also, to get a feel for his very “non-dhimmi” approach, watch his famous “Ten Demands of Islam.”

About Raymond Ibrahim
Raymond Ibrahim, a Shillman Fellow at the DHFC, is a widely published author on Islam, and an Associate Fellow at the Forum. Join him as he explores the "Intersection"—the pivotal but ignored point where Islam and Christianity meet—including by examining the latest on Christian persecution, translating important Arabic news that never reaches the West, and much more.