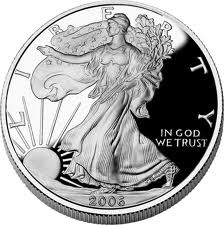 It has been a year since I called for a silver bull.  It has climbed from $17 to around $40 and now hangs around $35.  This article calls for another bull move through $100.  As mentioned, this would reflect the last great move back in the early eighties.  I think it is possible because inventories have been absorbed by investors and no overhang is showing up to ruin the party.

Besides, significant new production is generally years away so that cannot put a damper on the party.

I do think that Morgan Stanley short position has now been largely eliminated through various hedges and cannot be expected to be a factor.  They were certainly headed in that direction a year ago.

However plenty of capital pools can make a bullish calculation and that is more than enough to drive it up.

All things been equal we should have a good run through Christmas at which time I would exit the market.  Exterior forces can change this but this bull has a decent chance.

This morning, Citigroup came out with a report and said that silver could hit $100 an ounce, if it follows the pattern it had between 1971 and 1980.

According to Citigroup, “If the final rally in the last bull market

repeated then we can expect $100 over the long term,” said Tom Fitzpatrick and two other analysts in a research note. “While the high so far this year was at the same level as the peak in January 1980, we are not convinced that the long-term trend is over yet.”

According to Citigroup, the silver bull market started in November 2001, and rose 5.8 times through March 2008, before falling 60%.

“The move down from the April high this year has come to an end and the double bottom is a good platform for a turn back up,” the analysts said in the report.

This is not the first outlandish call on silver we have seen in recent weeks, with Silver 's (NYSE: SLW) CEO Randy V.J. Smallwood saying he sees silver prices well above $50 in the next few years.

Smallwood spoke with Dow Jones last month, and said that he sees $2,000 an ounce gold, and if that happens, silver will be pulled up along with it. He also expected serious consolidation in the space if silver stays that high. If silver touches $100 an ounce, as Citigroup said potentially could happen, we could see even more M&A in the space, as miners are flush with cash and looking to expand their reserves to capitalize on the demand for the precious metal.

If silver cracks over $50 an ounce, there is the likelihood that silver will be subjected to Comex margin hikes, and would see a small drop in the price of silver. With demand in continuing to stay strong, this could just be a short-term blip in the road before moving sharply higher. Silver levels at the Comex continue to be at record low levels, and if there is a move past $50 an ounce, there could be a massive short squeeze, thus driving prices higher, like we saw late in 2010, and early 2011.

, as well as continued economic uncertainty due to terror attacks, high debt amounts, sovereign defaults, and worries that there could a potential U.S. downgrade of its prestigious Aaa rating. None of these worries or causes are going away in the short term, so silver and gold look to continue making new highs, albeit with some blips.

So how should traders play it?

Traders who believe that silver is likely going to head towards $100 an ounce might want to consider the following trades:

Considering this is a hugely bullish call for a bank, there are a few ways to play this. Silver is generally talked down by large banks, as a couple of them have large short positions in the precious metal. Names like Silver Wheaton, Pan American Silver Corp. (NASDAQ: PAAS [FREE Stock Trend Analysis]) should do well.

If you are looking for smaller silver miners that are more levered towards the price of silver, consider a name like First Majestic Silver Corp. (NYSE: AG).

Traders who believe that silver does hit $100 an ounce, this could be very bearish for the U.S. dollar and may consider alternate positions:

Consider investing in a short U.S. Dollar ETF, such as PowerShares DB US Dollar Index Bearish (NYSE: UDN) or CurrencyShares Swiss Franc Trust (NYSE: FXF [FREE Stock Trend Analysis]).
Neither Benzinga nor its staff recommend that you buy, sell, or hold any security. We do not offer investment advice, personalized or otherwise. Benzinga recommends that you conduct your own due diligence and consult a certified financial professional for personalized advice about your financial situation.