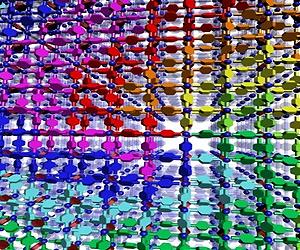 They may well be bases, but the primacy of the DNA bases can hardly be in dispute.  And it makes perfect sense that other bases exist for special applications.

In the meantime we are slowly winkling out the majesty of the DNA ruling our cells and body.

It has been a remarkable passage to observe over the decades.

For decades, scientists have known that DNA consists of four basic units - adenine, guanine, thymine and cytosine. Those four bases have been taught in science textbooks and have formed the basis of the growing knowledge regarding how genes code for life. Yet in recent history, scientists have expanded that list from four to six.

Now, with a finding published online in the July 21, 2011, issue of the journal Science, researchers from the of Medicine have discovered the seventh and eighth bases of DNA.

These last two bases - called 5-formylcytosine and 5 carboxylcytosine - are actually versions of cytosine that have been modified by Tet proteins, molecular entities thought to play a role in DNA demethylation and stem cell reprogramming.

Thus, the discovery could advance stem cell research by giving a glimpse into the DNA changes - such as the removal of chemical groups through demethylation - that could reprogram adult cells to make them act like stem cells.

"Before we can grasp the magnitude of this discovery, we have to figure out the function of these new bases," said senior study author Yi Zhang, PhD, Kenan Distinguished Professor of biochemistry and biophysics at UNC and an Investigator of the Howard Hughes Medical Institute.

"Because these bases represent an intermediate state in the demethylation process, they could be important for cell fate reprogramming and cancer, both of which involve DNA demethylation." Zhang is also a member of the .

Holden Thorp, UNC chancellor and Kenan Professor of Chemistry in the College of Arts and Sciences, said Zhang's discovery was a significant development that holds promise for a variety of areas.

"Research such as this, at the intersection of chemistry, biology, physics and medicine, show the value of scientists like Yi Zhang who tackle both practical problems and fundamental scientific mysteries," said Thorp.

"Having devoted a large part of my research career to understanding the fundamental processes in nucleobase and nucleotide oxidation, I'm particularly excited to see this signature result at . The concept of sequential nucleobase oxidation as an epigenetic signal is tantalizing."

Much is known about the "fifth base," 5-methylcytosine, which arises when a chemical tag or methyl group is tacked onto a cytosine. This methylation is associated with gene silencing, as it causes the DNA's double helix to fold even tighter upon itself.

Last year, Zhang's group reported that Tet proteins can convert 5 methylC (the fifth base) to 5 hydroxymethylC (the sixth base) in the first of a four step reaction leading back to bare-boned cytosine. But try as they might, the researchers could not continue the reaction on to the seventh and eighth bases, called 5 formylC and 5 carboxyC.

The problem, they eventually found, was not that Tet wasn't taking that second and third step, it was that their experimental assay wasn't sensitive enough to detect it.

Once they realized the limitations of the assay, they redesigned it and were in fact able to detect the two newest bases of DNA. The researchers then examined embryonic stem cells as well as mouse organs and found that both bases can be detected in genomic DNA.

The research was funded by the Howard Hughes Medical Institute and the National Institutes of Health. Study co-authors from UNC include Shinsuke Ito, PhD; Li Shen, PhD; Susan C. Wu, PhD; Leonard B. Collins and James A. Swenberg, PhD.

Thank you for commenting on your experiences here. The main role of DNA molecules is the long term storage of information, which is often compared to a set of blueprints, since it contains the instructions needed to construct other components...