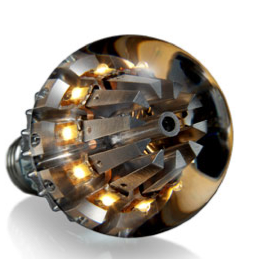 It is clear from this that household LED lighting is a deliverable now and will rapidly converge on the necessary price point that drives the competition from the field.

Even more interesting is that they have been able to tune in the light quality of the incandesent bulb that we are all so used to. This is a huge selling point.

The shoe that has not dropped yet is that it is plausible to actually tune the light output to optimize user pleasure.  Research needs to be done here but it is clearly feasible in a way never before possible.

For example a modest shift toward the yellow part of the spectrum may turn out to be psychologically way more satisfying and easier on the eyes generally.  We will not know unless we try.

It has been a long wait, but inevitable once the full three colors were available to LED. 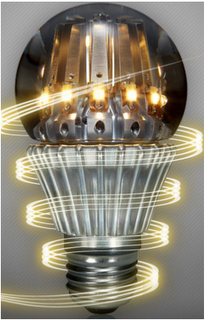 Ventured-funded, San Jose, California-based startup Switch Lighting plans to launch a line of solid-state-lighting (SSL) retrofit lamps at the upcoming Lightfair International event and says they will have products on shelves at major retailers in the 4th quarter. The unique lamp design mounts LEDs facing outward on metal fingers and an inert liquid inside the globe cools the components allowing for higher drive currents and brighter light from fewer components.

Of course there are many tradeoffs that come into play when you increase drive currents such as potentially shorter lifetime and greater cost for the cooling system. Plus the comparison with the Philips design is inherently unfair. LED components are constantly improving and the Switch design is likely based on one generation newer components than is the Philips product.

Still Switch’s lamp specs are impressive. The lamps have a 2750K warm-white color temperature and a CRI of 85. The lamps are rated for 18 years of life based on three hours of usage per day. Switch claims the 75W replacement lamp will deliver $140 in energy savings over the life of the product relative to a 75W incandescent.

Switch will also demonstrate 60W and 40W replacements at Lightfair. And Switch plans to offer all three in neutral white as well as warm white color temperature. Sharenow projects that the 60W lamps will sell in the $20 range at retail.

Sharenow also believes the design will deliver superior radiant lighting to LED lamps currently on the market. He said, “We mount the LEDs on the finders to give us the beautiful radiant flux that you get out of an incandescent.”

The LEDs face outwards as you can see in the photos, and the frosted globe distributes light in all directions. While the lamps are at the prototype stage, Sharenow said that Switch has had LM-79 tests performed by Arizona-based Lighting Sciences – recently acquired by UL. Sharenow asserts that the report document its radiance claims.

The prototype pictured here uses LEDs that integrate a lens. The production units will use LEDs with no lens. Sharenow said that the liquid inside the globe has an index of fraction that exactly matches the source and maximizes efficacy. The specs list efficacy at 75 lm/W for the 75W replacement.

The metal fingers upon which the LEDs are mounted combined with the liquid are designed to convect heat to the globe and into the ambient environment. Switch calls the design a self-cooling environment.

With our unique self-cooling technology, we make the brightest warm white LED light bulb available,” said Sharenow. “We offer the most affordable, energy-efficient light bulb on the market that is nearly identical to the regular incandescent bulbs we’ve come to love.”

The Switch design will use LEDs with single emitters as opposed to say the Cree EasyWhite LEDs that use multiple emitters and a mix of light to deliver consistent color. Sharenow expects to be able to source components from multiple vendors. That could mean that the company will have to buy a more-expensive narrow bin to hit the color temperature and CRI specs. Sharenow expects programs such as thePhilips Freedom From Binning program announced at Strategies in Light to supply the needed component consistency.

Sharenow also claims that Switch has developed significant innovations in the driver electronics. The design utilizes a driver IC for a merchant semiconductor vendor that has been customized for Switch according to Sharenow. He said the company will discuss the details of the driver electronics once its patents are approved. Sharenow also said the prototypes have been tested with and approved to work with “every dimmer we could find.”

The Lightfair demonstrations will be a welcome opportunity to see these lamps in operations. The real test, however, for Switch and its venture backer VantagePoint Capital Partners will be production units shipping in volume.

Maury Wright is the Senior Technical Editor of LEDs Magazine.

They're ugly;
they contain mercury,
they put out harsh, white light that many people find unbearable.
Light from an incandescent bulb matches the light from a new Switch LED bulb.

With our unique City of Light™ Technology, Switch delivers the best of both worlds: bright, warm, incandescent-quality light in a bulb that dramatically reduces energy consumption and costs. It even rivals the incandescent in functionality — with uniform light dispersion, consistent color and a standard A19 form factor that works in any orientation. Switch can be used in most standard lighting fixtures, from floor lamps to overhead lights, and is an ideal choice for residential, commercial or hospitality settings.

Switch's 60-watt-replacement bulb will sell for about $20, and the 75-watt and 100-watt replacements will cost slightly more. As LEDs are mass-produced over time, their prices will plummet. A year from now, Switch's 60-watt-equivalent bulb should sell for under $15, and could hit $10 the year after that.
On average, an incandescent bulb lasts about 1,000 hours—that's about a year, if you keep it on for about three hours a day. Electricity in also costs about 11 cents per kilowatt hour (that's the average; it varies widely by region).


The Switch bulb also has an average lifespan of 20,000 hours—20 years. If you count the price of replacing the incandescent bulb every year, the Switch bulb will have saved you money by its fourth year.


Over 20 years, you'll have spent a total of about $142 for the incandescent bulbs (for electricity and replacement bulbs) and less than $50 for Switch's 60-watt bulb.

In 2 years, a $10 cost would have a payback of 2 years for energy savings and lack of replacement to make the new LED the better buy.


The color of the light matches and the size and shape are as before.


* The lamps have a 2750K warm-white color temperature and a CRI of 85. The lamps are rated for 18 years of life based on three hours of usage per day. Switch claims the 75W replacement lamp will deliver $140 in energy savings over the life of the product relative to a 75W incandescent.
Posted by arclein at 12:01 AM

I prefer temps in the 5000 - 6500 range. But while mixing different temp LEDs would add to the cost of the product both in complexity and lower LED volume per unit purchase) it would result in a wider temp range that might be interesting.