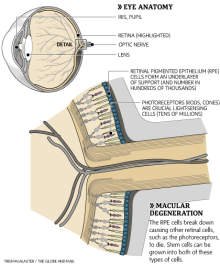 This is obviously the big one in stem cell work.  In the end we will be able to dispense with bone marrow work and matching up donors.

Along with the many other advancing protocols, this means that we are well on the way to solving all replacement issues for the human body.  Blood matters.

The speed of advance in stem cell work and relate protocols has become astonishing and we can quickly see the dawn of a new era approaching in which human flaws will all be swiftly repaired.  Henceforth, medical practice will be mostly be about the restoration of good health.

From Friday's Globe and Mail

It’s been a 50-year-old dream, and a 23-year hunt, but the immortal mother cell behind the billions of new blood cells humans make every day has at last been discovered – raising the possibility of growing a new blood system for any patient who needs it.

Scientists at ’s University Health Network say they have finally captured the prized stem cell that endlessly replenishes human blood, a cell so powerful that one is enough to regenerate a human blood supply in a mouse.

Coaxing these chameleons to perform the same trick in people could alleviate the desperate need to find matching bone marrow donors – a goal that researchers say is now within reach.

“I expect we’ll have the first blueprint of the genetic program driving these stem cells within the next two years. … In five years, we’ll have the tools to expand them from human patients,” said study leader John Dick, senior scientist at the UHN’s Ontario Cancer Institute. “I never imagined we’d get to where we are today in my lifetime.”

Worldwide, about 35,000 people a year receive bone marrow transplants to replace their blood supplies as a result of cancers and other disorders. But an estimated two-thirds of those in need never find a bone marrow donor matching their immune system profile, particularly patients who are not Caucasian or are of mixed ancestry. Many die waiting.
While blood stem cells taken from an umbilical cord have recently offered an alternate transplant source, they cannot be grown in large-enough quantities to treat an adult.

But with the new-found ability to pick out the pure and most powerful blood stem cells from a patient or from the blood of a single umbilical cord, those limits could, theoretically, be overcome.

“We may be able to get more from one cord if you can grow up these stem cells precisely,” Dr. Dick said.

The discovery comes too late for Bryan and Joanne Bedard of Windsor, Ont. Their three-year-old daughter Katelyn died of acute myeloid leukemia in June of 2005 after failing to find a matching bone marrow donor. Losing her prompted the Bedards to form the Katelyn Bedard Bone Marrow Association to encourage people to register as potential donors.

“It would have been wonderful for us to think we might have had this option,” Mr. Bedard said, calling the discovery “huge and very exciting.”

According to the OneMatch Stem Cell and Marrow Network, more than 900 Canadians are currently waiting for an unrelated bone marrow match. Yet even for them, Mr. Bedard said, the new finding offers hope and “gives some solace that other folks would not suffer the same tragedy.”

In some cases, patients receive transplants of their own stem cells. Yet this type of procedure carries a chance of doctors inadvertently re-implanting a patient’s contaminated or cancerous cells. Isolating only the pure blood stem cells for transplant would reduce this risk.

Lying dormant in human bone marrow for long periods of time, a pure blood stem cell is protected from the genetic damage that can build up in cells that steadily divide, Dr. Dick said. When the master blood stem cell does spring into action, it can remake itself and give rise to daughter cells that produce the various types of red, white and plasma cells in the human blood system.

Dr. Dick’s group, whose work is published Friday in the journal Science, found the telltale signature of these mother cells is a seven-marker code of proteins carried on their surface. Knowing this signature also provides the crucial recipe for researchers trying to reprogram ordinary cells to act like blood stem cells.

“What John [Dick] has isolated is our ultimate destination, that’s what I want to get to – without this, we didn’t know what we’re looking for,” said Mick Bhatia, scientific director of the Stem Cell and Cancer Research Institute at McMaster University in Hamilton.

He and his team have reprogrammed adult skin cells into blood stem cells they hope to test soon in clinical trials. They are now using the seven-marker code to investigate whether they have managed to make the master cell. “This has been a needle-in-a-haystack story,” he said, “and John has actually found the needle and described what the needle looks like.”

Ever since Canadian researchers James Till and Ernest McCulloch first discovered stem cells in 1961, leading to the first bone marrow transplants, scientists have chased the master cell behind the blood system’s regeneration. Everyone knew the cells existed, because bone marrow transplants work – but “until now nobody had ever spotted one,” Dr. Dick said.

The cells are so rare they make up only about one in every 100,000 blood cells. And only with advances in technology have researchers been able to collect and sort millions of cells at once, allowing them to identify the markers that might distinguish a master cell from other cells.

But the only way to find out if those candidates could re-grow a blood system was to test their power in an animal. “You can’t transplant the candidates into humans, you have to do it in an immune-deficient mouse,” said Dr. Dick, who first genetically engineered a mouse to accommodate a human blood system in 1988.

With ongoing improvements to their specially bred mice, the UHN team, which included Faiyaz Notta and Sergei Doulatov, whittled down the number of candidates from one in three million cells to one in 20. Finally they pulled off “a Hail Mary experiment,” showing that one alone could repopulate the blood supply in their mouse models.

Dr. Dick, also a senior scientist with the McEwen Centre for Regenerative Medicine, acknowledged the most obvious criticism of the work is that the human blood stem cell was tested in mice – “the ultimate proof will be whether [it] can be used to transplant a human.”
Posted by arclein at 12:01 AM

Thank you very much for your ideas to post comments. Stem cells are cells with the potential to develop into many different types of cells in the body. They serve as a repair system for the body...