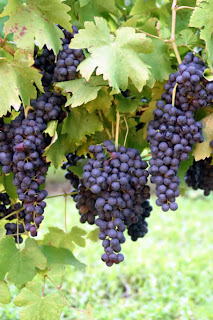 This effect should show up as a statistical difference between daily wine drinking populations and those who drink far less.  Otherwise the effect is presently too little to justify too much excitement.

Yet it is additional support for the value of all edible red and blue fruit generally.  They have the antioxidants at least.  We already find an association with reducing circulatory damage.  Again it is all associations and limited understanding.

Newswise — Researchers at of Medicine have found that grape seed polyphenols—a natural antioxidant—may help prevent the development or delay the progression of Alzheimer’s disease. The research, led by Giulio Maria Pasinetti, MD, PhD, The Saunder Family Professor in Neurology, and Professor of Psychiatry and Geriatrics and Adult Development at Mount Sinai School of Medicine, was published online in the current issue of theJournal of Alzheimer’s Disease.

This is the first study to evaluate the ability of grape-derived polyphenols to prevent the generation of a specific form of β-amyloid (Aβ) peptide, a substance in the brain long known to cause the neurotoxicity associated with Alzheimer disease. In partnership with a team at the University of Minnesota led by Karen Hsiao Ashe, MD, PhD, Dr. Pasinetti and his collaborators administered grape seed polyphenolic extracts to mice genetically determined to develop memory deficits and Aβ neurotoxins similar to those found in Alzheimer’s disease. They found that the brain content of the Aβ*56, a specific form of Aβ previously implicated in the promotion of Alzheimer’s disease memory loss, was substantially reduced after treatment.

“Since naturally occurring polyphenols are also generally commercially available as nutritional supplements and have negligible adverse events even after prolonged periods of treatment, this new finding holds significant promise as a preventive method or treatment, and is being tested in translational studies in Alzheimer’s disease patients,” said Dr. Pasinetti.

The study authors emphasize that in order for grape-derived polyphenols to be effective, scientists need to identify a biomarker of disease that would pinpoint who is at high risk to develop Alzheimer’s disease.

“It will be critical to identify subjects who are at high risk of developing Alzheimer’s disease, so that we can initiate treatments very early and possibly even in asymptomatic patients,” said Dr. Pasinetti. “However, for Alzheimer’s disease patients who have already progressed into the initial stages of the disease, early intervention with this treatment might be beneficial as well. Our study implicating that these neurotoxins such as Aβ*56 in the brain are targeted by grape-derived polyphenols holds significant promise.”

This research was funded by a grant from the National Institutes of Health. Dr. Giulio Pasinetti is a named inventor of a pending patent application filed by of Medicine (MSSM) related to the study of Alzheimer’s disease. In the event the pending or issued patent is licensed, Dr. Pasinetti would be entitled to a share of any proceeds MSSM receives from the licensee.