Attack of the Urban Mosquito 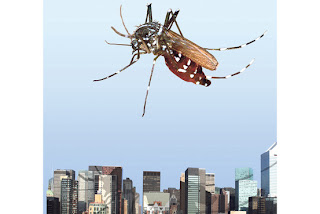 It has never really occurred to me just how easily different species of mosquitoes can be shipped around the world through our present shipping industry.  Now we have a nastier mosquito to work with on the East coast.

This one even likes urban environments.

The only thing that makes living with mosquitoes almost bearable is that they are easy enough to individually kill.  Yet you still must clean them out of a space in order to have any peace.

As anyone should know, the common housefly is notoriously difficult to kill and also a huge nuisance, but at least does not bite.

All this reminds us of a fundamental reality.  The insect population is never going to simply disappear.  At the best, we can suppress it locally to allow work to become bearable.  Otherwise, ample use of effective deterrent odors is the only option.

I have posted on several agricultural protocols that exploit wetlands in particular.  A big reason these were little worked in the past is surely the unbearable haze of insects.  Their potential productivity was always obvious.

We need to win the anti insect arms race and make working in these environments easy.

Attack of the Urban Mosquitoes

The latest scourge crossing the country has a taste for the big city.

The Asian tiger mosquito, named for its distinctive black-and-white striped body, is a relatively new species to the that is more vicious, harder to kill and, unlike most native mosquitoes, bites during the daytime. It also prefers large cities over rural or marshy areas—thus earning the nickname among entomologists as "the urban mosquito."
"Part of the reason it is called 'tiger' is also because it is very aggressive," says Dina Fonseca, an associate professor of entomology at . "You can try and swat it all you want, but once it's on you, it doesn't let go. Even if it goes away, it will be back for a bite."

Dr. Fonseca is leading a Department of Agriculture effort to develop a cost-effective method to control the Asian tiger mosquito(Aedes albopictus) population. The university is currently focusing on using larvacides, which render larvae incapable of growing into adults.

Since urban areas tend to be warmer—often by 5 to 10 degrees—than rural areas, cities are seeing tiger mosquitoes earlier and sticking around longer, often into October.

The species has been traced to 1985, when a ship arrived in loaded with used truck tires, perhaps from , which is a major used-tire exporter, according to research by the Centers for Disease Control and Prevention. The eggs hatched when they were exposed to water. Since then, the species has made its way from to and up the East Coast, says Gary G. Clark, a research leader with the Agriculture Department. "Now, more than half of the states have this aggressive species," he says.

Another species imported from Asia is the rock pool mosquito (Aedes japonicus), which also came to the through the tire trade, experts say. This species is blackish-brown, with white scales on the lower part of its thorax and legs. It was first detected on , , and in areas of in 1997, according to Dr. Fonseca. "Even though it is not as vicious a biter as the Asian tiger mosquito, it is a big pest," she says.

These urban mosquitoes are what entomologists call "container mosquitoes." Instead of marshes and natural bodies of water, both Asian tiger and rock pool mosquitoes can breed in small, artificial containers, such as tires, toys, cans and concrete structures. "A rule of thumb for container mosquitoes is: Water plus seven days equals mosquitoes," Dr. Fonseca says.

Weather patterns can help Asian tigers readily spread beyond the Northeast. "As a result of climate change, the summer lasts longer and arrives earlier," says Andrew Comrie, a climatologist at the . Eggs of Asian tiger and rock pool mosquitoes are also able to "overwinter," meaning they can survive a cold, dry climate—all they need is exposure to water in warmer temperatures.

The Asian tiger was responsible for transmitting more than 200 cases of dengue fever, a sometimes-fatal viral infection, in in 2001-02. A similar (but less lethal) virus called chikungunya was transmitted in and , but no cases have been cited in the from the Asian tiger. Likewise, the rock pool mosquito is capable of transmitting the West Nile virus, but no cases have been traced to the species in the , Dr. Fonseca says.

That does little to take the sting out of their bites. Irritation and itching are the body's allergic reaction to the protein secreted from the female mosquito when it bites.

Cities that spray for mosquitoes may find these latest breeds tough to tackle. "The usual methods of spraying cannot control the population of these species because their preferred breeding areas are difficult to reach," says Mr. Andrews, the mosquito-control agent.

Moreover, the optimum conditions for spraying are early evening, after these mosquitoes retire. Also, Dr. Fonseca, the entomologist, explains that spraying kills only the adult mosquitoes and not the eggs or larvae.

To reduce the chances of getting bitten, remove containers that have standing water in them. The best personal protection comes from products that contain DEET. The chemical has been controversial, but "as long as you don't bathe in DEET or inhale too much of it, you should be fine," says Bruce Robinson, a clinical instructor of dermatology at in . Since the tiger is a low-flying mosquito, keep ankles and legs covered. Also, the Asian tiger is a very visual mosquito, Dr. Fonseca says. "If you wear dark-colored clothes, you will be inviting it to bite you."