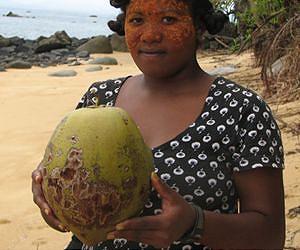 The Coconut is the one plant that is clearly linked to the earliest sea migrations for rather obvious reasons.  Here we catch some of its prehistory and I think that collecting as much data as possible is well worth the effort.

I recall an item from Pissarro’s expedition to in which he encountered a trade balsa raft loaded with several tons of coconuts coming from an important coconut island. The ship was larger than their own.  It is a given that the trade was already thousands of years old.  Suggesting that the Spanish had much to do with its original establishment is plain wrong on that basis alone unless someone can show serious species differences.

Since such voyaging was possibly 40,000 years old, we are cautioned to make no conclusions at this point.

The pleasant surprise is that some information is actually available to collect.

A chef wearing avocado sunscreen holds a sweet nui vai coconut. The photo was taken in the Masoala Peninsula of Madagascar by plant biologist Bee Gunn while she was collecting coconut leaf tissue for DNA analysis.The DNA of the Madagascar coconuts turned out to be particularly interesting, preserving, as it did, news of the arrival of ancient Austronesians at the island off Africa. IMage courtesy Bee Gunn/National Geographic Society.

The coconut (the fruit of the palm Cocos nucifera) is the Swiss Army knife of the plant kingdom; in one neat package it provides a high-calorie food, potable water, fiber that can be spun into rope, and a hard shell that can be turned into charcoal. What's more, until it is needed for some other purpose it serves as a handy flotation device.

No wonder people from ancient Austronesians to Captain Bligh pitched a few coconuts aboard before setting sail. (The mutiny of the Bounty is supposed to have been triggered by Bligh's harsh punishment of the theft of coconuts from the ship's store.)

So extensively is the history of the coconut interwoven with the history of people traveling that Kenneth Olsen, a plant evolutionary biologist, didn't expect to find much geographical structure to coconut genetics when he and his colleagues set out to examine the DNA of more than 1300 coconuts from all over the world.

"I thought it would be mostly a mish-mash," he says, thoroughly homogenized by humans schlepping coconuts with them on their travels.

He was in for a surprise. It turned out that there are two clearly differentiated populations of coconuts, a finding that strongly suggests the coconut was brought under cultivation in two separate locations, one in the Pacific basin and the other in the basin. What's more, coconut genetics also preserve a record of prehistoric trade routes and of the colonization of the .

The discoveries of the team, which included Bee Gunn, now of the Australian National University in Australia, and Luc Baudouin of the Centre International de Recherches en Agronomie pour le Developpement (CIRAD) in Montpellier, France, as well as Olsen, associate professor of biology at Washington University in St. Louis, are described in the June 23 online issue of the journal PLoS One.

Before the DNA era, biologists recognized a domesticated plant by its morphology. In the case of grains, for example, one of the most important traits in domestication is the loss of shattering, or the tendency of seeds to break off the central grain stalk once mature.

The trouble was it was hard to translate coconut morphology into a plausible evolutionary history.

There are two distinctively different forms of the coconut fruit, known as niu kafa and niu vai, Samoan names for traditional Polynesian varieties. The niu kafa form is triangular and oblong with a large fibrous husk. The niu vai form is rounded and contains abundant sweet coconut "water" when unripe.

Dwarf coconuts. Dwarfing suggests domestication, but only 5 percent of the world's coconuts have the dwarf form. "Quite often the niu vai fruit are brightly colored when they're unripe, either bright green, or bright yellow. Sometimes they're a beautiful gold with reddish tones," says Olsen.

Coconuts have also been traditionally classified into tall and dwarf varieties based on the tree "habit," or shape. Most coconuts are talls, but there are also dwarfs that are only several feet tall when they begin reproducing. The dwarfs account for only 5 percent of coconuts.

Dwarfs tend to be used for "eating fresh," and the tall forms for coconut oil and for fiber.
"Almost all the dwarfs are self fertilizing and those three traits - being dwarf, having the rounded sweet fruit, and being self-pollinating - are thought to be the definitive domestication traits," says Olsen.

"The traditional argument was that the niu kafa form was the wild, ancestral form that didn't reflect human selection, in part because it was better adapted to ocean dispersal," says Olsen. Dwarf trees with niu vai fruits were thought to be the domesticated form.

The trouble is it's messier than that. "You almost always find coconuts near human habitations," says Olsen, and "while the niu vai is an obvious domestication form, the niu kafa form is also heavily exploited for copra (the dried meat ground and pressed to make oil) and coir (fiber woven into rope)."

"The lack of universal domestication traits together with the long history of human interaction with coconuts, made it difficult to trace the coconut's cultivation origins strictly by morphology," Olsen says.

DNA was a different story.

The project got started when Gunn, who had long been interested in palm evolution, and who was then at the , contacted Olsen, who had the laboratory facilities needed to study palm DNA.

Together they won a National Geographic Society grant that allowed Gunn to collect coconut DNA in regions of the western for which there were no data. The snippets of leaf tissue from the center of the coconut tree's crown she sent home in zip-lock bags to be analyzed.

"We had reason to suspect that coconuts from these regions -especially and the - might show evidence of ancient 'gene flow' events brought about by ancient Austronesians setting up migration routes and trade routes across the southern ," Olsen says.

Olsen's lab genotyped 10 microsatellite regions in each palm sample. Microsatellites are regions of stuttering DNA where the same few nucleotide units are repeated many times.
Mutations pop up and persist pretty easily in these regions because they usually don't affect traits that are important to survival and so aren't selected against, says Olsen. "So we can use these genetic markers to 'fingerprint' the coconut," he says.

The new collections were combined with a vast dataset that had been established by CIRAD, a French agricultural research center, using the same genetic markers. "These data were being used for things like breeding, but no one had gone through and systematically examined the genetic variation in the context of the history of the plant," Olsen says.

Two origins of cultivation The most striking finding of the new DNA analysis is that the Pacific and coconuts are quite distinct genetically. "About a third of the total genetic diversity can be partitioned between two groups that correspond to the Indian Ocean and the ," says Olsen.

"That's a very high level of differentiation within a single species and provides pretty conclusive evidence that there were two origins of cultivation of the coconut," he says.

In the Pacific, coconuts were likely first cultivated in island Southeast Asia, meaning the Philippines, Malaysia, Indonesia, and perhaps the continent as well. In the Indian Ocean the likely center of cultivation was the southern periphery of , including , the , and the Laccadives.

The definitive domestication traits -the dwarf habit, self-pollination and niu vai fruits - arose only in the Pacific, however, and then only in a small subset of Pacific coconuts, which is why Olsen speaks of origins of cultivation rather than of domestication.

"At least we have it easier than scientists who study animal domestication," he says. "So much of being a domesticated animal is being tame, and behavioral traits aren't preserved in the archeological record."

Did it float or was it carried?

One exception to the general Pacific/Indian Ocean split is the western Indian Ocean, specifically and the , where Gunn had collected. The coconuts there are a genetic mixture of the type and the Pacific type.

Olsen and his colleagues believe the Pacific coconuts were introduced to the Indian Ocean a couple of thousand years ago by ancient Austronesians establishing trade routes connecting Southeast Asia to and coastal east .

Olsen points out that no genetic admixture is found in the more northerly Seychelles, which fall outside the trade route. He adds that a recent study of rice varieties found in shows there is a similar mixing of the japonica and indica rice varieties from Southeast Asia and .

Much later the Indian Ocean coconut was transported to the by Europeans. The Portuguese carried coconuts from the Indian Ocean to the West Coast of Africa, Olsen says, and the plantations established there were a source of material that made it into the Caribbean and also to coastal .

So the coconuts that you find today in are largely the type, Olsen says, which is why they tend to have the niu kafa form.

On the Pacific side of the New World tropics, however, the coconuts are coconuts. Some appear to have been transported there in pre-Columbian times by ancient Austronesians moving east rather than west.

During the colonial period, the Spanish brought coconuts to the Pacific coast of from the , which was for a time governed on behalf of the King of from .

"The big surprise was that there was so much genetic differentiation clearly correlated with geography, even though humans have been moving coconut around for so long."

Far from being a mish-mash, coconut DNA preserves a record of human cultivation, voyages of exploration, trade and colonization.