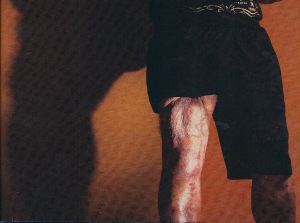 Tissue regeneration is presently leaping ahead far faster than I expected.  The need is simply too real and the available volunteers too many.  Suddenly they all have a choice and who wants to do anything final when it is obvious that a better way will be available in a few short months.

Thus, however inconvenient, tissue removal will be now postponed as much as possible until therapies such as the ones described herein become available.

The basic protocol will likely be a case of removing cells from a pig organ to leave the collagen structure.  Then the patients own cells are per fused into the structure and once well established, the new organ is placed into the patient.

In the first case they were able to place a matrix to substitute for missing muscle mass with splendid results.

Stephen Badylak is a leading researcher on tissue regeneration. Here is a link to his publications.

It appears that they are having success with inducing the regeneration of muscle tissue using extracellular matrices and bioscaffolds and using recellularized tissue. They hope to regenerate whole limbs with biodome regenerative sleeve which will control the conditions around a wound to allow for regeneration.


Badylak was featured in a 60 minutes feature in late 2009 on growing body parts.

Badylak is featured in the July/August 2011 Discover Magazine for his work in regenerating the muscle tissue in the leg of marine Corporal Isaias Hernandez.

In the case of Corporal Hernandez, his arms and legs were injured when a mortar exploded while he was hauling a television to a military vehicle in preparation for an upcoming trip. 70% of the muscle in his right thigh was destroyed by a mortar. His right leg received the worst of the shrapnel, initially doctors advised him to have the leg amputated. Instead Corporal Hernandez was put on a fitness regime to build up his existing muscle; surgeons then cut open his thigh and inserted a thin slice of the extracellular matrix. After a few weeks Corporal Hernandez found his leg rapidly growing in bulk and strength.


Researchers at the McGowan Institute hope to eventually be able to restore not only muscle but complete limbs as well. While these types of animal hormone based therapies remain controversial, it’s difficult to argue against saving life and limb.

Previous research on vertebrate limb regeneration indicates there are several mediating factors involved during the re-growth process. These factors are both biochemical and biophysical. While the phenomenon of adult limb regeneration does not occur naturally in mammalian species, prior research has focused mainly on biochemical modes of stimulating tissue growth and regeneration. The BioDome was aimed at developing a new experimental tool to permit the more systematic study of the impact of biophysical and biochemical factors on mammalian tissue regeneration. The BioDome is a multi-component sleeve assembly that encompasses the wound site of an amputated murine digit and provides an environment conducive to tissue regeneration. The studies showed that the BioDome was effective in supporting early stages of murine digit tip regeneration when combined with a porcine urinary bladder matrix (UBM) pepsin digest and electrical stimulation. The hydrated inner environment of the BioDome influenced regeneration, with additional effects seen with the application of electrical stimulation and pharmacological treatments.


Biologic scaffolds for constructive tissue remodeling.
Residual dendrimer amine groups were modified with incorporate COOH group containing biomolecules such as cell adhesion peptides into collagen scaffolds. YIGSR, as a model cell adhesion peptide, was incorporated into both the bulk structure of the gels and onto the gel surface. The effects of the peptide modified collagen gels on corneal epithelial cell behavior were examined with an aim of improving the potential of these materials as tissue-engineering scaffolds. YIGSR was first chemically attached to dendrimers and the YIGSR attached dendrimers were then used as collagen crosslinkers, incorporating the peptide into the bulk structure of the collagen gels. YIGSR was also attached to the surface of dendrimer crosslinked collagen gels through reaction with excess amine groups. The YIGSR modified dendrimers were characterized by H-NMR and MALDI mass spectra. The amount of YIGSR incorporated into collagen gels was determined by (125)I radiolabelling at maximum to be 3.1-3.4 x 10(-2)mg/mg collagen when reacted with the bulk and 88.9-95.6 microg/cm(2) when attached to the surface. The amount of YIGSR could be tuned by varying the amount of peptide reacted with the dendrimer or the amount of modified dendrimer used in the crosslinking reaction. It was found that YIGSR incorporation into the bulk and YIGSR modification of surface promoted the adhesion and proliferation of human corneal epithelial cells as well as neurite extension from dorsal root ganglia.

A whole-organ regenerative medicine approach for liver replacement
The therapy of choice for end-stage liver disease is whole-organ liver transplantation, but this option is limited by a shortage of donor organs. Cell-based therapies and hepatic tissue engineering have been considered as alternatives to liver transplantation, but neither has proven effective to date. A regenerative medicine approach for liver replacement has recently been described that includes the use of a three-dimensional organ scaffold prepared by decellularization of xenogeneic liver. The present study investigates a new, minimally disruptive method for whole-organ liver decellularization and three different cell reseeding strategies to engineer functional liver tissue. Methods: A combination of enzymatic, detergent, and mechanical methods are used to remove all cells from isolated rat livers. Whole-organ perfusion is used in a customized organ chamber and the decellularized livers are examined by morphologic, biochemical, and immunolabeling techniques for preservation of the native matrix architecture and composition. Three different methods for hepatocyte seeding of the resultant three-dimensional liver scaffolds are evaluated to maximize cell survival and function: (1) direct parenchymal injection, (2) multistep infusion, or (3) continuous perfusion. Results: The decellularization process preserves the three-dimensional macrostructure, the ultrastructure, the composition of the extracellular matrix components, the native microvascular network of the liver, and the bile drainage system, and up to 50% of growth factor content. The three-dimensional liver matrix reseeded with the multistep infusion of hepatocytes generated ∼90% of cell engraftment and supported liver-specific functional capacities of the engrafted cells, including albumin production, urea metabolism, and cytochrome P450 induction. Conclusions: Whole-organ liver decellularization is possible with maintenance of structure and composition suitable to support functional hepatocytes.

The definitive treatment for end stage organ failure is orthotropic transplantation. However, the demand for transplantation far exceeds the number of available donor organs. A promising tissue-engineering/regenerative-medicine approach for functional organ replacement has emerged in recent years. Decellularization of donor organs such as heart, liver, and lung can provide an acellular, naturally occurring three dimensional biologic scaffold material that can then be seeded with selected cell populations. Preliminary studies in animal models have provided encouraging results for the proof of concept. However, significant challenges for three dimensional organ engineering approach remain. This manuscript describes the fundamental concepts of whole-organ engineering, including characterization of the extracellular matrix as a scaffold, methods for decellularization of vascular organs, potential cells to reseed such a scaffold, techniques for the recellularization process and important aspects regarding bioreactor design to support this approach. Critical challenges and future directions are also discussed. Expected final online publication date for the Annual Review of Biomedical Engineering Volume 13 is July 15, 2011.