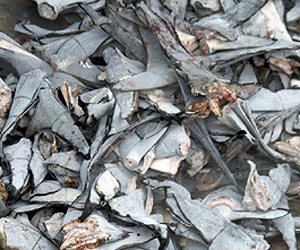 Whatever one may think of the ethics of harvesting sharks that simply do not reproduce quickly, it is also apparent that regulation is utterly unable to halt fishing piracy even in coastal waters lacking robust enforcement.  Here we observe that the wild fishery is totally collapsing and leaving the exploiters soon without an income.

Fishery conservation not presently practiced in far too many places and we get stories like this where a foreign fleet can arrive and strip mine a whole region and then depart.  It really just has to run its course I suspect, as unpleasant as that is.  We did it to the buffalo and we are now restoring the herds and will ultimately even restore them in were they were destroyed in prehistory.

So while I remain disgusted, I also understand that restoration under properly managed circumstances is practical.

I see more hope in finding the consumers turning away from the product.  Sometimes this is ill advised, but here that is not the case.

Retired fisherman Sada Fall is upbeat. His two sons are returning from sea with a boatload of "gold", as he calls shark fins, whose value has near-obliterated the ocean's top predator in these seas.

Fall, 62, walks along the beach in this fishing village in the north of , his blue-grey boubou flapping in the dry, dusty wind, a bright red flowered umbrella shielding him from the scorching sun.

"This is the great shark cemetery," he says waving his hand dramatically across the beach where dried hunks of shark meat are piled up, filling the air with a musty, acrid odour as suffocating as the heat.

Colourful painted pirogues line the beach where children play and sheep wander around. A giant pelican is curiously tethered to one of the crumbling houses.

is one of the biggest shark landing sites in and one of scores along the west African coast where the predator is quickly disappearing.

Fall's sons have been gone for two weeks deep into Mauritanian waters for a voyage which, including food, water, fuel and salt to pack the fish, can cost more than 500,000 CFA (750 euros/$1,000).

Spurring these fishermen on is the insatiable Asian appetite for shark fins, which make their way onto ostentatious dinner tables in Hong Kong, Taiwan and Japan.

"The fins don't stay here, they are worth a lot of money," says Fall.

He explains that when a boat lands, amidst the chaos of bartering and buying shark meat to be dried, smoked and sold in the region, the fins are swept away by intermediaries to Dakar, and treated very carefully.

"The fins are gold, sometimes we keep them in our own living room - with the air conditioning on," he laughs.

Often the intermediaries will meet with Asian businessmen in a hotel to hand over the booty.

A Carrefour spokesman told the Straits Times it will not replenish its stocks of the environmentally controversial products after they sell out.

The company is the world's second-largest retailer and operates two supermarkets in 's city centre.

It told the paper the decision was made on its own initiative as a socially responsible retailer, but it could not be reached for comment on whether the ban would extend to its other outlets worldwide.

Shark fin remains a sought after delicacy in , where it is largely served at Chinese festive celebrations and wedding receptions.

According to the conservation group WWF, the city-state is the world's second largest shark fin trading centre after .

WWF-Hong Kong says the consumption of shark fins is a driving factor behind the threat to shark populations, with more than 180 species considered threatened in 2010 compared to only 15 in 1996.

NTUC FairPrice -- a cooperative run by the city-state's national trades union -- said it would drop the products from April after an inflammatory comment by one of its suppliers attracted a flurry of complaints.

The supplier had said "Screw the divers!" in an online promotional message for a new product to be launched at FairPrice outlets during the upcoming Lunar New Year.

Retailer Cold Storage was the first chain to stop selling shark fin, which it did in September last year as part of a collaboration with WWF, local media reported.

Mika Diop, a biologist and coordinator of the Sharks sub-regional Action Plan (SRPOA-Sharks) says that depending on the size and species of the fin involved, they sell for up to 100,000 CFA (150 euros) per kilogram (2.2 pounds).

But it is the men further up the chain who benefit the most, as many fishermen don't realise exactly how valuable their product is. Some restaurants charge more than $100 for a bowl of sharp fin soup.

"We catch them, but I couldn't afford a small bowl of soup," says Fall.

In West Africa, shark fishing began in the 1970's, booming in the nineties due to rising demand from Asia for shark fins, according to a report entitled "30 Years of Shark Fishing in West Africa" co-authored by Diop in 2011.

Since 2003, shark catches have plummeted. This is not good news but a sign that there are less to catch.

These days fishermen can spend up to 20 days at sea, heading as far west as Cape Verde or south to Sierra Leone in search of their gold, with what Diop bemoans as an often "mercenary mindset".
Diop explains that sharks are particularly vulnerable because it can take more than 10 years for them to reach sexual maturity and their fertility rate is very low, making recovery from overfishing all year round near impossible.

"On average the weight of the fin represents only two percent of the total weight of the animal, so you can see the massacre needed to keep up with the demand for shark fins," he tells AFP.

In , Fall finally gets a phone call from his pirogue. Days of bad weather have hampered fishing and even the good days have yielded no sharks. The boat is now expected the following day.

A fisherman for more than 30 years, he has seen first hand the worrying drop in shark numbers.
"We are obliged to catch small sharks. We know its not good but if one person doesn't, the next will...

"It brings in a lot of money, so we don't see the importance of the shark. We earn and we will keep on earning until the sharks disappear," he says sadly.

The shark fishing report talks of days when hammerhead sharks up to six metres long (20 feet) and one-tonne sawfish were caught in these waters.

The sawfish -- printed on the back of Senegalese bank notes -- hasn't been seen since the early 1990s in coastal waters from to , except for .

Diop's shark project has published an identification guide for fishermen and has helped west African nations put legislation in place, most importantly to ban "finning". In this legislation is still in the pipeline.

Finning is the practice of cutting of the shark fin while at sea, and tossing the rest of the shark back into the ocean to face a cruel death by suffocation or blood loss. Despite the laws, it still continues.

If shark-hunting, in and the world over, is not brought under control, Diop and other experts predict dire results for a marine ecosystem regulated by the predator for some 400 million years.

A report by the Pew Environment Group in June 2011 estimates some 73 million sharks are caught annually and 30 percent of species are threatened with extinction.

The fisherman Sada Fall becomes anxious and harder to get hold of. The "big shark guy around here" -- his distributor -- has left back to after hearing the fishing trip has not gone well.
Three days after the boat was supposed to land it reaches shore just after midnight. With no sharks caught, it quickly refuels and heads out again for several more gruelling, and expensive, days in search of fisherman's gold.

A new low in man's inhumanity. I am very sad to hear of these atrocities with regard to the mutilations and slaughter of sharks for the money god.

If you don't earn you and your family will starve to death, it is as simple as that.

They are doing what any person would do, they are earning a living supplying a market from 'the commons'. Until ownership is individualised the mantra "if one person doesn't, the next will" will always remain true.