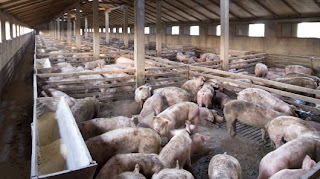 This does not sound too practical, but it reminds us that protocols do exist for pigs that at least that takes advantage of the ammonia through bacterial activity in a deep bed of wood shavings.  That does clean up the air inside the barns.  Such material is steadily reduced until it is suitable as soil additive.  I would go further and actually carbonize the spent bedding material.

A practical air to air heat exchange has long been desired, but efficiency is a real problem as the thermodynamic gradient is rather small to start with.  The best I have ever heard of was an attempt to devise a rotary separator that split hot from slower cold gases in a gas stream to produce a cold and warm output flow.  In winter, the warm flow can be reblended with the incoming airflow while the opposite can be done in summer.  Sounds good, but practicality needs to be demonstrated.  The challenge is to get it to work well without using a secondary source of compressed air.

In some respects, this is a solved problem whose solution has never been universally implemented.  In agriculture there are many such situations as there are in industrial process.  A global solution has to be established such as occurred to end the problem of released refrigerants.  Otherwise, the added cost is enough to allow profiteering to occur at the expense of the compliant.

If you've ever so much as stepped into a chicken or swine barn, you'll know that they can be very, very smelly places. When vented outdoors, the air from these buildings does more than just make the area stink - it can actually be a major source of air pollution and greenhouse gases. Fortunately, however, researchers from North Carolina State University and West Virginia University have created a system that not only helps clean the air going out of the barns, but it heats up the air coming in from outside.

The system runs the polluted air through a biofiltration medium, such as compost or wood chips. Bacteria living within that material break down and neutralize the pollutants, much as they do in biofilters used for fish ponds or aquariums. Once it's time to replace the medium, the old material can be used as crop fertilizer, as it is full of valuable nitrogen.

The use of such a filtration system would increase costs for farmers on its own, so the researchers are hoping to offset those costs by allowing the system to assist in heating incoming air. This is done using a heat exchanger, which receives heat from both the warm, polluted air that is being treated, and from the biochemical reactions taking place within the biofilter.

So far the team has focused on the removal of ammonia, as it is very plentiful in such barns, and is a major source of pollution. When a prototype system was tested on a 5,000-bird chicken barn, it was found to remove up to 79 percent of the ammonia from the outgoing air, and recovered up to 8.3 kilowatts of heat.

"The technology is best suited for use when an operation wants to vent a facility that has high ammonia concentrations, and pump in cleaner air in preparation for a fresh batch of chicks or piglets - particularly in cold weather" said NC State's Dr. Sanjay Shah. "It is also suitable for use when supplemental heat is required for raising the young animals."

A paper on the research was recently published in the journal Applied Engineering in Agriculture.