Comet Disintegrates into the Solar Wind 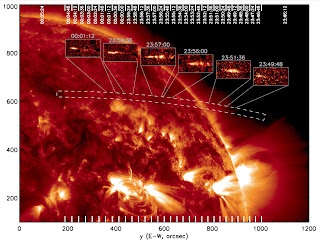 We are in the process of having several satellites observing the sun at close range.  This means that they will be able to see many comets that are rather small crash and burn through the solar atmosphere.  It can and will be a great source of data.

It is also pretty clear why there is so much elemental carbon associated with comets.  Starting originally as methane snow balls, the comets on each pass heats a fresh supply of methane through the disassociation temperature to drive off the hydrogen.  This leaves carbon behind.  Thus when a well travelled comet passes by the sun and gets charged up again, we get a tail of charged carbon crystals trailing behind.

A direct hit on Earth would load a large amount of carbon into out atmosphere as happened with and the 12,900 BP comet.

Comet Corpses in the Solar Wind

Jan. 20, 2012: A paper published in today's issue of Science raises an intriguing new possibility for astronomers: unearthing comet corpses in the solar wind.  The new research is based on dramatic images of a comet disintegrating in the sun's atmosphere last July.

Comet Lovejoy grabbed headlines in Dec. 2011 when it plunged into the sun's atmosphere and emerged again relatively intact.  But it was not the first comet to graze the sun. Last summer a smaller comet took the same trip with sharply different results. Comet C/2011 N3 () was completely destroyed on July 6, 2011, when it swooped 100,000 km above the stellar surface.  NASA's Solar Dynamics Observatory (SDO) recorded the disintegration.

"For the first time, we saw a comet move across the face of the sun and disappear," says Dean Pesnell, a co-author of the Science paper and Project Scientist for SDO at the .  "It was unprecedented."

In Jan. 20th issue of Science, the research team reported their analysis of the SDO images.

A key finding was the amount of material deposited into the sun's atmosphere.  "The comet dissolved into more than a million tons of electrically charged gas," says Pesnell.  "We believe these vapors eventually mixed with the solar wind and blew back into the solar system."

Pesnell says it might be possible to detect such "comet corpses" as they waft past Earth. Comets are rich in ice (frozen H2O), so when they dissolve in the hot solar atmosphere, the gaseous remains contain plenty of oxygen and hydrogen. A solar wind stream containing extra oxygen could be a telltale sign of a disintegrated comet. Other elements abundant in comets would provide similar markers.

Comet corpses are probably plentiful.  There's a busy family of comets known as "Kreutz sungrazers," thought to be fragments of a giant comet that broke apart hundreds of years ago. Every day or so, sees one plunge into the sun and vanish. Each disintegration event creates a puff of comet vapor that might be detectable by spacecraft sampling the solar wind.

Why bother? Researchers are beginning to think of sungrazers as 'test particles' for studying the sun's atmosphere--kind of like tossing rocks into a pond.  A lot can be learned about the pond by studying the ripples.

Indeed, SDO observed some extraordinary interactions between the sun and the doomed comet.  As C/2011 N3 (SOHO) moved through the hot corona, cold gas lifted off the comet's nucleus and rapidly (within minutes) warmed to more than 500,000K, hot enough to shine brightly in SDO's extreme ultraviolet telescopes.

"The evaporating comet gas was glowing as brightly as the sun behind it," marvels Pesnell.

The gas was also rapidly ionized by a process called "charge exchange," which made the gas responsive to the sun's magnetic field. Caught in the grip of magnetic loops which thread the solar corona, the comet's ionized tail wagged back and forth wildly in the moments before final disintegration.

Watching this kind of sun-comet interaction could reveal new things about the thermal and magnetic structure of the solar atmosphere.  Likewise, measuring how long it takes for "comet corpses" to reach Earth, and then sampling the gases when they arrive, could be very informative.

"Before SDO, no one dreamed we could observe a comet disintegrate inside the sun's atmosphere," says Pesnell who confesses that even he was a skeptic. But now, "I'm a believer."

it's been amazing, being able to watch the sun so closely