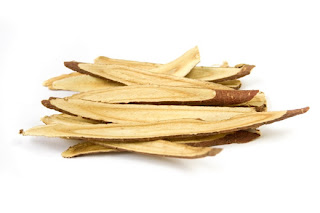 The first issue we all face is sourcing real licorice.  The stuff we do consume happens to be anise oil which tastes the same but is not the same.  Here we discover that the real ingredient available in real licorice does kill some of the bacteria that damage dental health.

Probably the safest way to make use of the benefit is to simply chew of a piece of the dried root to masticate it and extract the chemicals into one’s saliva.  Anything else sounds like candy, and a piece of root is unlikely to cause excessive use which can affect blood pressure.  It is not a drug to be played with, which is why I would stick with doing it all the hard way.

The root itself is grown for up to three years although that also suggests that the best quality will come from much longer matured root as is true for raising ginseng.  Even better, grow your own by planting some every year for a while and harvesting partially to provide a series of different ages to see what really is best.

Sticks formed from the root have been sold but I suspect that they may not be readily available.  I will have to check with my nearby (I live in Vancouver and I mean nearby!) Chinese herbalist.

ScienceDaily (Jan. 4, 2012) — Scientists are reporting identification of two substances in licorice -- used extensively in Chinese traditional medicine -- that kill the major bacteria responsible for tooth decay and gum disease, the leading causes of tooth loss in children and adults. In a study in ACS' Journal of Natural Products, they say that these substances could have a role in treating and preventing tooth decay and gum disease.

Stefan Gafner and colleagues explain that the dried root of the licorice plant is a common treatment in Chinese traditional medicine, especially as a way to enhance the activity of other herbal ingredients or as a flavoring. Despite the popularity of licorice candy in the , licorice root has been replaced in domestic candy with anise oil, which has a similar flavor. Traditional medical practitioners use dried licorice root to treat various ailments, such as respiratory and digestive problems, but few modern scientific studies address whether licorice really works. (Consumers should check with their health care provider before taking licorice root because it can have undesirable effects and interactions with prescription drugs.) To test whether the sweet root could combat the bacteria that cause gum disease and cavities, the researchers took a closer look at various substances in licorice.

They found that two of the licorice compounds, licoricidin and licorisoflavan A, were the most effective antibacterial substances. These substances killed two of the major bacteria responsible for dental cavities and two of the bacteria that promote gum disease. One of the compounds -- licoricidin -- also killed a third gum disease bacterium. The researchers say that these substances could treat or even prevent oral infections.
Posted by arclein at 12:01 AM

Before that study on licorice, there have already been toothpastes in the market that contain that herb as a substitute for fluoride. With the present discovery on the effects of licorice, more people will be convinced to buy such natural toothpastes.