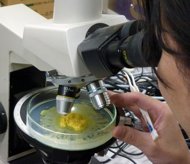 I have become a fan of slime molds.  After all, it appears that they operate just like our own internet with each cell providing processing capability and one presumes some form of memory.  They are never static either.  They can form up into an imitation of a flower and build networks around difficult obstacles and likely all sorts of other tricks we have not yet noticed.

Thus while we can readily posit just such structures in the brain, here we see them working toward a common goal that is a close emulation of brain function or at least some aspects of it.

It forever amazes me to see something invented or discovered and to then find a working analog out in nature.

A brainless, primeval organism able to navigate a maze might help Japanese scientists devise the ideal transport network design. Not bad for a mono-cellular being that lives on rotting leaves.

Amoeboid yellow slime mold has been on Earth for thousands of years, living a distinctly un-hi-tech life, but, say scientists, it could provide the key to designing bio-computers capable of solving complex problems.

Toshiyuki Nakagaki, a professor at Future University Hakodate says the organism, which he cultivates in petri dishes, "organises" its cells to create the most direct root through a maze to a source of food.

He says the cells appear to have a kind of information-processing ability that allows them to "optimise" the route along which the mold grows to reach food while avoiding stresses -- like light -- that may damage them.

"Humans are not the only living things with information-processing abilities," said Nakagaki in his laboratory in on 's northernmost .

"Simple creatures can solve certain kinds of difficult puzzles," Nakagaki said. "If you want to spotlight the essence of life or intelligence, it's easier to use these simple creatures."

And it doesn't get much simpler than slime mold, an organism that inhabits decaying leaves and logs and eats bacteria.

Physarum polycephalum, or grape-cluster slime, grows large enough to be seen without a microscope and has the appearance of mayonnaise.

Nakagaki's work with this slime has been recognised with "Ig Nobel" awards in 2008 and 2010.

An irreverent take on the Nobel prizes, Ig Nobel prizes are given to scientists who can "first make people laugh, and then make them think."

And, say his contemporaries, slime may sound like an odd place to go looking for the key to intelligence, but it is exactly the right place to start.

Atsushi Tero at Kyushu University in western Japan, said slime mold studies are not a "funny but quite orthodox approach" to figuring out the mechanism of human intelligence.

He says slime molds can create much more effective networks than even the most advanced technology that currently exists.

"Computers are not so good at analysing the best routes that connect many base points because the volume of calculations becomes too large for them," Tero explained.

"But slime molds, without calculating all the possible options, can flow over areas in an impromptu manner and gradually find the best routes.

"Slime molds that have survived for hundreds of millions of years can flexibly adjust themselves to a change of the environment," he said. "They can even create networks that are resistant to unexpected stimulus."

Tero and his research team have successfully had slime molds form the pattern of a railway system quite similar to the railroad networks of the Kanto region centering -- which were designed by hard-thinking people.

He hopes these slime mold networks will be used in future designs of new transport systems or electric transmission lines that need to incorporate detours to get around power outages.

Masashi Aono, a researcher at Riken, a natural science research institute based in Saitama, says his project aims to examine the mechanism of the human brain and eventually duplicate it with slime molds.

"I'm convinced that studying the information-processing capabilities of lower organisms may lead to an understanding of the human brain system," Aono said. "That's my motivation and ambition as a researcher."

Aono says that among applications of so-called "slime mold neuro-computing" is the creation of new algorithm or software for computers modelled after the methods slime molds use when they form networks.

"Ultimately, I'm interested in creating a bio-computer by using actual slime molds, whose information-processing system will be quite close to that of the human brain," Aono said.
"Slime molds do not have a central nervous system, but they can act as if they have intelligence by using the dynamism of their fluxion, which is quite amazing," Aono said. "To me, slime molds are the window on a small universe."