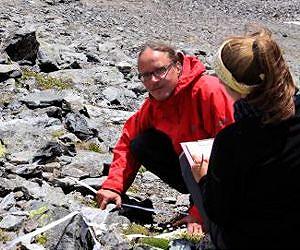 What this study does do is confirm rather nicely that the climate is warmer in as is understood from other work.  The effect of been warmer is that plant life has been forced to adjust over the past decade as a lagging indicator of the previous rise in temperature.

I personally think that European temperatures have achieved conditions similar to both the Medieval Warming and the Roman Optimum which lasted centuries in both cases and ended with an abrupt chilling a few centuries in.  I base that mostly on the recent recovery of wine growing in .  has not thawed enough yet so it is too soon to pasture cows there perhaps, but the process has certainly begun.

I am actually quite optimistic that we have a solid five centuries of warm conditions in the Northern Hemisphere ahead of us.  I also think that if we are able to reforest the totally during this period, the resultant warming will moderate the abrupt chill coming at the end.

In the meantime, the is continuing to lose net sea ice mass and we should begin seeing a little drama in the even this year if folks pick up on it.


"We did not expect to find such a significant change in such a short space of time," said Michael Gottfried, lead author of the study. Credit: Verena Schaeffer.

Climate change is having a more profound effect on alpine vegetation than at first anticipated, according to a study carried out by an international group of researchers and published in Nature Climate Change. The first ever pan-European study of changing mountain vegetation has found that some alpine meadows could disappear within the next few decades.

Led by researchers from the Austrian Academy of Sciences and the University of Vienna, biologists from 13 different countries in Europe analysed 867 vegetation samples from 60 different summits sited in all major European mountain systems, first in 2001 and then again just seven years later in 2008.

They found strong indications that, at a continental scale, cold-loving plants traditionally found in alpine regions are being pushed out of many habitats by warm-loving plants.

"We expected to find a greater number of warm-loving plants at higher altitudes, but we did not expect to find such a significant change in such a short space of time," said Michael Gottfried from the Global Observation Research Initiative in Alpine Environments (GLORIA) programme which coordinated the study.

"Many cold-loving species are literally running out of mountain. In some of the lower mountains in , we could see alpine meadows disappearing and dwarf shrubs taking over within the next few decades," he warns.

The study, which is the largest and most comprehensive of its kind in the world, confirmed that there is a direct link between growing summer temperature and the shift in alpine plant composition.

"While regional studies have previously made this link, this is the first time it has been shown on a continental scale," said Gottfried.

"We hope that our thermophilization indicator could be used by other research groups around the world and enable a global comparison," said Harald Pauli, GLORIA's network coordinator.

The research also showed that the effect is independent of altitude (it is happening at the tree line as well as on high mountain peaks) and latitude (the effect is seen in northern countries such as Scotland as well as southern mountain ranges such those on Crete).

"Our work shows that climate change affects even the outer edges of the biosphere," said Georg Grabherr, chair of the GLORIA programme.

"The thermophilisation of alpine life zones can never be controlled directly. Adaptation strategies are not an option and we must concentrate on mitigating climate change in order to preserve our biogenetic treasure."