Why Does Our Universe Have Three Dimensions? 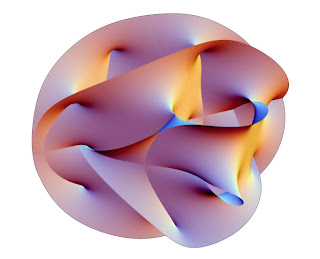 This is all good fun and provides a little of the flavor of present efforts to create a fresh new tarpaulin to cover the known facts and include gravity.

For the record my new metric for physics allows us to construct the cosmos without any recourse to a spare dimension or two although such a spare dimension can be posited with little disturbance to hold the space time manifold itself although this is likely unnecessary.   Please note I have published the third and forth order but it is easy but time consuming to extend it to the necessary nth order for cosmological discussions.

The reason that it has been necessary to play with higher dimensions is because of the underlying assumption in our mathematica that the inverse of empirical infinity is zero.  This is a bad mistake and has led to lots of nonsense.

It is enough to know that no point in the universe is perfectly smooth.  If you recall nothing else, then you should not go to far wrong

Our universe has three dimensions because it is the least needed.  Proving that is certain to produce a headache.

WHY DOES OUR UNIVERSE HAVE THREE DIMENSIONS?

Why does our universe look the way it does? In particular, why do we only experience three spatial dimensions in our universe, when superstring theory, for instance, claims that there are ten dimensions -- nine spatial dimensions and a tenth dimension of time?
Japanese scientists think they may have an explanation for how a three-dimensional universe emerged from the original nine dimensions of space. They describe their new supercomputer calculations simulating the birth of our universe in a forthcoming paper in Physical Review Letters.

Before we delve into the mind-bending specifics, it's helpful to have a bit of background.
The Big Bang theory of how the universe was born has been bolstered by some pretty compelling observational evidence, including the measurement of the cosmic microwave background and the relative abundance of elements.

But while cosmologists can gaze back in time to within a few seconds of the Big Bang, at the actual moment it came into existence, when the whole universe was just a tiny point -- well, at that point, the physics we know and love breaks down. We need a new kind of theory, one that combines relativity with quantum mechanics, to make sense of that moment.

Over the course of the 20th century, physicists painstakingly cobbled together a reasonably efficient "standard model" of physics. The model they came up with almost works, without resorting to extra dimensions. It merges electromagnetism with the strong and weak nuclear forces (at almost impossibly high temperatures), despite the differences in their respective strengths, and provides a neat theoretical framework for the big, noisy "family" of subatomic particles.

But there is a gaping hole. The standard model doesn't include the gravitational force. That's why Jove, the physicist in Jeanette Winterson's novel, Gut Symmetries, calls the Standard Model the "Flying Tarpaulin" -- it's "big, ugly, useful, covers what you want and ignores gravity.” Superstring theory aims to plug that hole.

The geometric shape of those extra dimensions helps determine the resonant patterns of string vibration. Those vibrating patterns in turn determine the kind of elementary particles that are formed, and generate the physical forces we observe around us, in much the same way that vibrating fields of electricity and magnetism give rise to the entire spectrum of light, or vibrating strings can produce different musical notes on a violin.

All matter (and all forces) are composed of these vibrations -- including gravity. And one of the ways in which strings can vibrate corresponds to a particle that mediates gravity.
Voila! General relativity has now been quantized. And that means string theory could be used to explore the infinitely tiny point of our universe's birth (or, for that matter, the singularity that lies at the center of a black hole).

There's one more wrinkle, and that's this whole business of extra dimensions, when our world as we currently experience it has only three. Physicists have hammered out a pretty convincing hypothetical scenario for how this might have come about.

Before the Big Bang, the cosmos was a perfectly symmetrical nine-dimensional universe (or ten, if you add in the dimension of time) with all four fundamental forces unified at unimaginably high temperatures. But this universe was highly unstable and cracked in two, sending an immense shock wave reverberating through the embryonic cosmos.

The result was two separate space-times: the unfurled three-dimensional one that we inhabit, and a six-dimensional one that contracted as violently as ours expanded, shrinking into a tiny Planckian ball. As our universe expanded and cooled, the four forces split off one by one, beginning with gravity. Everything we see around us today is a mere shard of the original shattered nine-dimensional universe. 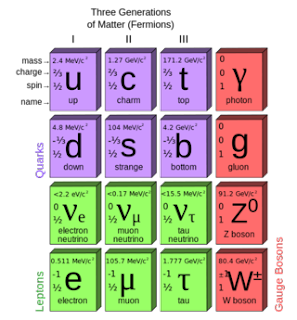 Physicists who espouse this view aren't sure why it happened, but they suspect it might be due to the incredible tension and high energy required to maintain a supersymmetric state, which could render it inherently unstable.

Imagine that you are trying to making the bed on laundry day, but the bed sheet has shrunk slightly in the wash. You manage to get it to fit around all four corners of the bed, but the sheet is stretched so tightly that it just won't stay in place.

There is too much strain on the fabric, so one corner inevitably pops loose, causing the bed sheet to curl up in that spot. Sure, you can force that corner back into place, but again, the strain will prove to be too much and another corner will pop.
Like the bed sheet, the original ten-dimensional fabric of space-time was stretched tight in a supersymmetric state. But the tension became too great, and space-time cracked in two. One part curled up into a tight little ball, while the aftershock from the cataclysmic cosmic cracking caused the other part to expand outward rapidly, a period known as inflation. This became our visible universe. That's what the Japanese simulation shows: the universe had nine spatial dimensions at its birth, but only three of them experienced expansion. It's the first practical demonstration of how a three-dimensional universe emerges from nine-dimensional space, providing strong support in favor of the theory's validity.

What is the mechanism by which this happened? For a ten-dimensional universe, there are millions of ways for supersymmetry to break. So is there something special about three spatial dimensions that causes that configuration to be favored in our own universe? The new simulations may help shed some light on why this symmetry breaking might have unfolded the way it did. 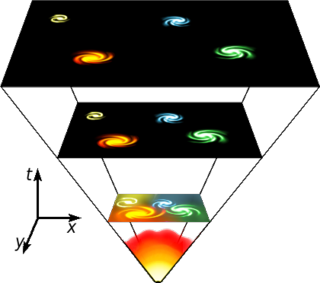 Jun Nishimura (KEK), Asato Tsuchiya ( ), and Sang-Woo Kim () tackled the problem using a formulation of string theory known as the IKKT matrix model (named after the scientists who developed it in 1996, Ishibashi, Kawai, Kitazawa, and Tsuchiya). It's designed to model the complex interactions of strings.

For very complicated technical reasons, the connection between the original IKKT matrix model and the real world was, well, a bit vague, mostly because (a) it assumes weak interactions, when in fact the interactions between strings are quite strong; and (b) the variable of time in the calculations wasn't treated as "real" in a mathematical sense. These new simulations assume strong interactions, and treat time as a real variable.

So the takeaway message is that string theorists now have a useful tool for analyzing superstring theory's predictions with computer simulations, shedding light on such knotty problems as inflation, dark matter, and the accelerating expansion of the universe. And it also explains why our universe looks the way it does.
Posted by arclein at 12:01 AM